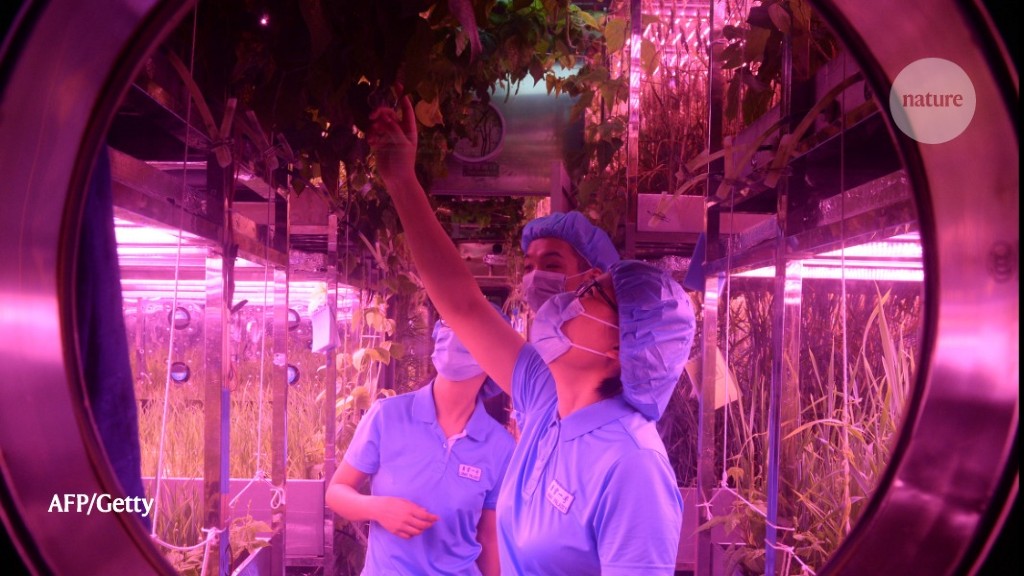 When Zhu Dongqiang moved from Nanjing to Beijing five years ago, he continued applying for joint grants with his former colleagues, travelling 1,000 km south each summer for teahouse discussions about research ideas.

Nanjing University, where Zhu was a professor of environmental chemistry, is among the world’s best research institutions in the Earth and environmental sciences, but he was attracted to Peking University’s College of Urban and Environmental Sciences for its resources, its concentration of leading scientists, its location in the capital, and the offer of a fully tenured professorship.

Zhu’s move to Beijing placed him at the country’s science epicentre. Beijing’s position as the number one science city in the Nature Index is based on article output in 82 high-quality journals chosen by an independent group of researchers. Collaboration between researchers based there and in Shanghai, which is ranked number five among Nature Index science cities, also makes Beijing and Shanghai the most productive city partnership in the index. In 2019, the two cities’ bilateral collaboration score (the sum of their Shares on joint articles) was more than 50% higher than the second most productive pair, New York and Boston.

Beijing has been China’s political and cultural capital for at least six centuries. Its contemporary domination of Chinese science is the result of Communist central planning: a deliberate concentration of funding, institutions, researchers and facilities, including mega-science infrastructure such as the Beijing Electron–Positron Collider, as well as the Five-hundred-meter Aperture Spherical Telescope (FAST), located 1,900 km away, in southwestern Guizhou, but operated by the Beijing-based National Astronomical Observatory of China. 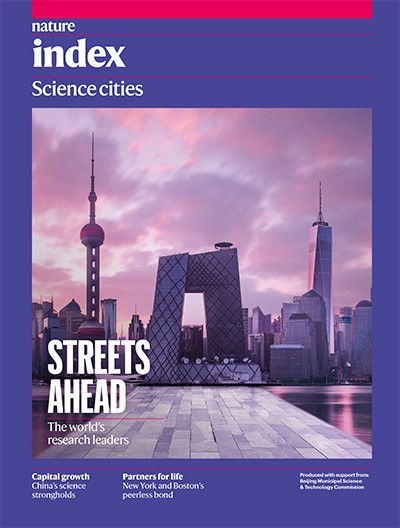 Yang Liying, a senior research fellow at the National Science Library of the Chinese Academy of Sciences (CAS), contrasts the centrally planned resources in the three major Chinese science hubs, Beijing, Shanghai and Nanjing, with the wider distribution of scientific resources in Western economies, where research hotspots tend to have evolved over time.

Beijing boasts 7 and Shanghai has 5 of the 42 top universities in China that were singled out for funding by the World’s First Rank Universities and Disciplines’ programme, which was launched by the Chinese Ministry of Education in 2017. At 6%, Beijing’s research intensity, the ratio between R&D expenditure and gross domestic product (GDP), is the highest in the country.

Research concentration is most apparent in the Haidian District in northwestern Beijing. It is home to Peking and Tsinghua universities, and the Beijing Normal University, as well as dozens of institutes of CAS, the nation’s flagship research institution and world number one in the Nature Index. Haidian’s schools are reputed to be the best in Beijing and perhaps the country, a strong draw for leading scientists looking to relocate, provided they can afford the skyrocketing housing prices. Some of the most productive chemistry labs at Peking and Tsinghua are located within a 15-minute walk of the CAS Institute of Chemistry. Such proximity spawned the Zhongguancun high-tech zone, also in the Haidian district, where Google, Microsoft, IBM, Sony, Intel, Motorola and Ericsson, among other multinational companies, have research centres.

In addition to Zhongguancun Park, Beijing has anointed several other science precincts, most notably Huairou Science City, jointly developed by CAS and the Beijing municipal government. The 68.4 square kilometre area, nearly 30 times the size of Zhongguancun Park, hosts the main campus of the University of Chinese Academy of Sciences and many branches of CAS institutes. By the end of 2019 it boasted 16 mega-science facilities, such as a molecular materials testing platform and an environmental surveillance system for the Tibetan plateau, worth a collective investment of 3.94 billion yuan. The Beijing municipal government has spent another 15.75 billion yuan (US$2.27 billion) on the science city’s urban infrastructure.

In 2017, Bai Chunli, president of CAS, inspected the facility and expressed the joint venture partners’ ambition to make Huairou Science City a world-class hub. He said that Beijing was home to 40% of CAS’s research capacities and more than half of its top-level research outputs.

A ‘Future Science City’ is also slated for Beijing’s Changping district. The plan is for an enterprise-led technological innovation hub, hosting dozens of corporate R&D centres spread over 43.5 square kilometres.

Per capita R&D spending in China’s two main science hubs, Beijing and Shanghai, is far higher than the national average. The same is true for Nanjing (US$776), China’s third science city, ranked 8th overall, 3rd for chemistry and 4th for Earth and environmental sciences.

The presence of CAS is an important factor in the strength of China’s top three science cities, especially Beijing, where 39 of CAS’s 110 institutes are based, compared with 16 in Shanghai and 5 in Nanjing. Its headquarters are in central Beijing, close to central government ministries and the Communist Party headquarters at Zhongnanhai, facilitating the academy’s close connections to top policymakers.

The high volume and quality of CAS’s scientific equipment is a magnet for research partners from other institutions in China. This, alongside a flow of its scholars to other institutions, consolidates Beijing’s place as a hub of Chinese scientific collaboration, and those of Shanghai and Nanjing, to a lesser extent.

A 2019 study in the journal Chinese Science Foundation (Z. Gao et al. Chin. Sci. Found. 4, 363–366; 2019) identified a net outflow of Distinguished Young Scientist award recipients from Beijing, mainly caused by a move from CAS institutes to universities outside the capital. Recipients of this prestigious award are given access to a National Science Foundation of China grant of up to 4 million yuan.

These scholars build bridges between former and current employers. The practice of leading scientists having multiple labs at different universities or research institutes, particularly those where they previously worked, is common, because it not only helps their graduate students finish their programmes smoothly, but it helps former employers harvest more authorships and research grants.

Zhang Lixin left the Beijing-based CAS Institute of Microbiology (IMCAS) in 2016 for the Shanghai-based East China University of Science and Technology (ECUST), where he is director of the National Key Lab of Bioreactor Engineering. Zhang kept his lab at IMCAS until early 2020 when his students had graduated, managing it with online communication tools and frequent visits to Beijing for academic meetings and grant applications.

Satoshi Ōmura and William Campbell shared half of the 2015 Nobel Prize in Physiology or Medicine for discovering avermectin, a microbial compound with derivatives effective against parasitic infections and insect pests. A year later, Zhang Lixin (pictured) received China’s National Award for the Advancement of Science and Technology for leading the development of a more efficient way to synthesize the compound.

The collaborative project between Zhang’s team at the CAS Institute of Microbiology, in Beijing, and three Chinese companies increased the fermentation efficiency of avermectin by 1,000 times compared with the original strain. Avermectin products are now made exclusively in China.

Zhang applies the same collaborative emphasis to his work synthesizing drugs from microorganisms as director of China’s National Key Lab of Bioreactor Engineering at the East China University of Science and Technology in Shanghai. This year, his lab contributed to the development of both nucleic acid and antibody testing kits for COVID-19 using biosensing and genome-editing techniques, which are now being exported to the United States and Europe.

Zhang’s two labs resulted in dozens of collaborative articles in top journals between IMCAS and ECUST. “Beijing is a true powerhouse [in China] with access to funding and other opportunities, while Shanghai has a very flexible policy and friendly business environment,” Zhang says. “I always encourage returnees from abroad to first establish roots in Beijing before migrating to other cities.”

The prestige attached to many institutions in Beijing and Shanghai means that China’s brightest scholars often study there before taking up academic appointments in their cities of origin after graduating. The common practice of young scientists seeking co-authorship opportunities from their previous doctoral advisors, even as a courtesy, perpetuates Beijing and Shanghai’s research output dominance, says Tang Li, a professor of science policy at the Shanghai-based Fudan University. She adds that China’s mega-science projects often require several labs to apply collectively. This also boosts cross-city collaboration, especially among Beijing, Shanghai and other Chinese research hubs.

The boost of returnees

Beijing, Shanghai, and to a lesser degree Nanjing, have been priority destinations for members of China’s Young Thousand Talents Scheme, which was launched in 2012 to attract young scientists overseas to return to China as independent principal investigators with good salaries and research funding. Returnees have boosted city collaboration between these major science hubs, according to a study by Shi Dongbo, a research fellow at the School of International and Public Affairs of Shanghai Jiao Tong University. Shi’s study, which has not yet been published, shows that after a transition period of up to three years, most Young Thousand Talents who returned to China by 2015 reached higher outputs than they did abroad. International collaborations remained stable, but domestic co-authorships significantly increased. “They seem to be nodes connecting overseas colleagues, their own labs, and their Chinese partners,” says Shi.

Zhu Dongqiang (pictured) has spent more than 20 years exploring how the surface properties of various absorptive materials, such as clay, interact with environmental pollutants. Now a professor of environmental chemistry, Zhu in 2012 received a National Science Foundation of China grant for distinguished young scientists in one of the country’s most prestigious natural-sciences honours.

Zhu joined Nanjing University (NJU) in 2005, and mostly collaborated with colleagues internally until he moved to Peking University (PKU) in Beijing in 2015, after which his collaborations with NJU continued. For example, Zhu and his colleagues at NJU developed a material called ordered mesoporous carbon, which is highly effective at removing liquid salt pollutants from water when oxidized.

At PKU Zhu is also involved in a research initiative to understand more about the global carbon cycle. His examination of the role of reactions at the interface of surfaces adds a microscope-based perspective.

“I’ve stayed with interest-driven research,” he says. “You need to collaborate with many different people with specific expertise and sparkling ideas to explore these novel areas.”

Despite this collaboration, all researchers contacted by Nature Index expressed worry about the impact of tension between China and the United States, including the expansion of visa bans against scientists from Chinese institutions with military ties. Travel restrictions and lockdowns caused by the pandemic may become a tipping point, breaking the workflows of cross-Pacific collaborations.

On the Chinese side, more policies and grants should be made available to encourage collaborations, both domestically and internationally, Tang says. But, in terms of output in the Nature Index, Beijing institutions’ collaborations within China, both within the city and with other cities, are far more productive than those with US institutions. In 2019, the seven Beijing–US pairs among the city’s top 10 international collaborators co-authored 80 Nature Index articles each on average, compared with 287 for the top 10 intra-Beijing pairs. Beijing’s position as Nature Index’s top science city seems assured for some time yet.