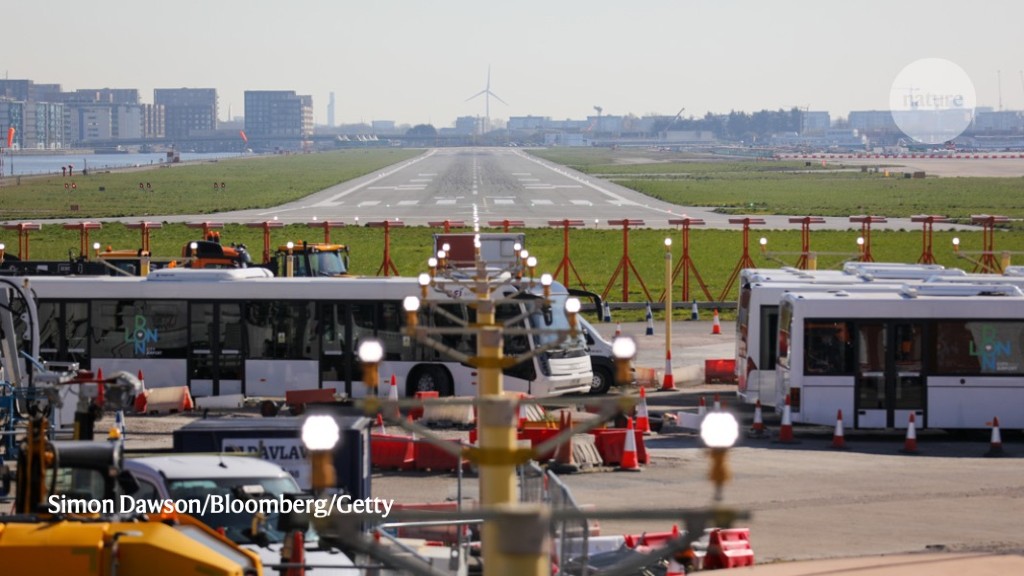 When the US Congress passed a US$2-trillion economic-stimulus plan on 27 March, $25 billion in economic aid for passenger airlines was just a small piece of it. But for environmentalists and their allies in Washington DC, it was a setback.

The airline industry is reeling from travel bans and government lockdowns designed to contain the new coronavirus: more than 1.1 million flights have been cancelled globally up to the end of June, and the industry is projecting revenue losses of more than $250 billion this year. Democrats in the US House of Representatives fought for the rescue package to include a provision that would have required airlines to cut emissions to 50% below 2005 levels by 2050 — a target that the industry has already committed to voluntarily. But environmental considerations were swept aside this week as lawmakers focused on short-term economic relief.

Holding the industry to its word would have been a big deal, says Annie Petsonk, international counsel for the Environmental Defense Fund, an advocacy group based in New York City. “I think the public is going to demand that going forward,” she adds.

But debate is just beginning over how best to drive economic recovery after the pandemic and whether climate change will factor into such plans. The pandemic will certainly affect the climate, just as it has affected all sectors of society. Scientists have already documented reductions in air pollution in China, Italy and New York City because of restrictions on human activity, and researchers are now forecasting that 2020 could see the first sharp declines in global greenhouse-gas emissions since the 2008 recession.

The ensuing economic crisis could linger for a few years, reducing energy demand and enabling renewable energy sources such as wind and solar to gain ground, says Glen Peters, research director at the Center for International Climate Research in Oslo. If governments play their cards right, 2019 could end up being the year that global emissions peaked, he says.

But a key question will be whether governments are able to advance climate goals as they roll out economic-stimulus plans — and if so, to what extent. “It is not as if building solar panels is going to put the tourism or restaurant industry back to work,” Peters says.

Experts see lessons in the US stimulus programme enacted under former president Barack Obama after the 2008 financial crisis. That package included investments in green infrastructure as well as $16.8 billion for research and development programmes targeting renewable energy and energy efficiency — part of a nearly $53-billion investment in science.

Money that targeted green infrastructure projects such as boosting public transport created more jobs than those focused on conventional projects such as building roads, says Helen Mountford, vice-president for climate and economics at the World Resources Institute, an environmental think tank in Washington DC.

But there is a danger that governments will fall back on high-carbon projects that are ready to go. Mountford notes that India and China have plenty of plans for coal-fired power plants that have been shelved in pursuit of renewable energy, and they could be revived quickly if the focus is purely on economic growth and jobs.

“That’s an easy way to go,” Mountford says, but she adds that governments would be wiser to focus on building a new future for workers and communities rather than propping up ailing fossil-fuel industries. “We are going to be urging governments not to solve one economic crisis by exacerbating another,” she says.

The Obama administration also used the government’s bailout of the car industry to garner an agreement to establish standards for fuel efficiency and greenhouse-gas emissions. Many see this as a model for how to advance public policy in times of distress. But governments often move in the opposite direction, offering relief from regulation as an incentive for growthsays David Livingston, an analyst with the Eurasia Group, a consultancy based in New York City. In the United States, the oil and gas industry has already requested that a variety of “non-essential” regulations be waived during the coronavirus crisis, and the US Environmental Protection Agency announced on 26 March that it is suspending most enforcement activities.

“Environmental measures are often the first thing to be jettisoned,” Livingston says.

This dynamic is already playing out in the aviation industry, which has been at the front of the queue for government relief in the COVID-19 crisis. In Europe, Livingston says, airlines are asking politicians to shelve looming carbon taxes, which would apply to flights within Europe and the European portion of external flights.

And earlier this month, Petsonk says, the industry pushed unsuccessfully to soften emissions rules that are being developed by the United Nations International Civil Aviation Organization (ICAO), which coordinates international standards for its 193 member nations. The ICAO has capped emissions for international flights at 2019–20 levels and is requiring airlines to offset any increases by investing in projects that curb emissions in other sectors.

The programme will be voluntary until 2026, but Petsonk gives the ICAO credit for listening to its technical experts and establishing strong boundaries. “Simply letting emissions bounce back to business-as-usual makes the climate crisis worse,” she says.

Ask Ethan: How Can We Help Young Black Physicists Succeed In Their Careers?
Satellite manufacturer LeoStella eyeing opportunities in U.S. defense market
Matter of opinion: What the 2021 Earth Day polls reveal
Mummified birds in the Atacama desert reveal a dark side of history
The chilling story of the ‘demon core’ and the scientists who became its victims