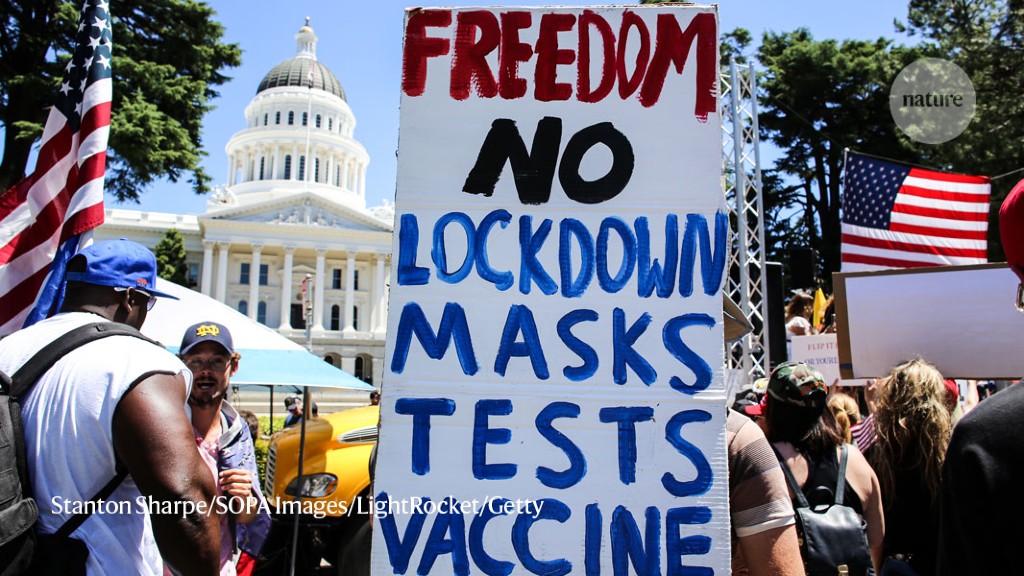 Several ongoing coronavirus-vaccine trials could announce game-changing results next month. But as anticipation grows, concerns are growing about whether the vaccines will clear safety trials, what they will achieve if they do and the risk that the approval process will be influenced by politics, or at least seem to be.

Two weeks ago, the UK trial of a leading vaccine candidate developed by the University of Oxford and pharmaceutical company AstraZeneca restarted after a six-day pause to investigate safety concerns. Halted trials of the same vaccine in South Africa and Brazil have also since resumed, but the US Food and Drug Administration (FDA) has not yet given the green light for US studies to start again. The trial’s sponsors have so far released few details about what caused the pause, and why the trial was allowed to resume. Some scientists say this lack of transparency could erode public trust in the vaccine.

In the background, fears have intensified that political meddling could see a vaccine approved for emergency use without sufficient evidence that it works. US President Donald Trump has said he wants a vaccine ahead of his country’s presidential election in November.

To assuage concerns, the drug companies behind the three leading coronavirus vaccines in phase III trials — AstraZeneca, Pfizer and Moderna — last week released documents describing how their tests are being conducted.

These trial protocols include benchmarks for safety and success, and details that had not been made public before, including how soon the vaccines’ preliminary results could be reported. The documents also describe about how the companies might stop trials early to get fast-tracked approval.

Here are three areas that scientists are watching closely.

Initially, researchers weren’t too concerned when the media reported that enrolment in the UK trial of the Oxford vaccine had been paused on 6 September because of an adverse reaction in a participant. Adverse reactions in clinical trials are quite common and often unrelated to the treatment — which some researchers say is probably the case with the Oxford vaccine, given how soon UK regulators allowed the trial to resume. Some media outlets have reported that the participant developed transverse myelitis, an inflammation of the spinal cord, but AstraZeneca and the University of Oxford, the UK trial sponsor, have not released information on the person’s condition.

Some scientists have criticised the lack of information being released, especially when it emerged that this was the second pause in enrolment because of an adverse reaction. Information sheets given to participants in July noted that the trial had previously been halted when a member was initially reported to have developed symptoms of transverse myelitis. AstraZeneca says the person was later diagnosed with multiple sclerosis, and an independent panel decided the condition was unrelated to the vaccine. But the company and Oxford University have yet to say whether the two participants received the vaccine or a placebo.

If it turns out that two people have developed transverse myelitis, given the relatively small number of people who have received the vaccine, that is noteable, says Raina MacIntyre, an epidemiologist at the University of New South Wales in Sydney, Australia. “If there’s another case, it’s going to be very hard for this trial to recover from that.”

MacIntyre notes that viral infections have been linked to both transverse myelitis and multiple sclerosis. Cases of transverse myelitis have also been observed in people with COVID-19, she says. To rule out a link between the vaccine and the conditions, researchers must run statistical analyses that compare rates of the conditions in participants who received the vaccines with those in people who got the placebo. This is probably what the FDA is still investigating before it decides whether to allow the US trials to resume, says MacIntyre.

More details about why the trials were paused and then later resumed should be made public, says Hilda Bastian, who studies evidence-based medicine at Bond University in the Gold Coast, Australia. The lack of transparency from the trial sponsors is a concern and could lead some participants to pull out, or cause people to decide not to get a vaccine once they are approved, says Bastian. “We really need people to have confidence in vaccines that are moving quite quickly.”

AstraZeneca and Oxford did not respond to questions about calls for greater transparency. But AstraZeneca’s CEO Pascal Soriot said during a panel discussion hosted by the World Economic Forum on 24 September that clinical trial guidelines recommend against disclosing information about individual patients to avoid compromising patient privacy and the integrity of the study.

Soriot said that given the public interest in these vaccines, companies were discussing what kind of transparency they could offer without compromising trials.

Public trust in coronavirus vaccines is already wavering, particularly in the United States, where Trump frequently touts his ‘Operation Warp Speed’ programme to accelerate COVID-19 vaccine development. Amid this rhetoric, the Pew Research Center in Washington DC said on 17 September that in surveys, the proportion of US adults likely to accept a COVID-19 vaccine if one were available had dropped from 72% in May to 51% in September. Three-quarters of those surveyed in September thought the United States would approve a vaccine before its safety and effectiveness had been firmly established.

These are not the usual vaccine sceptics: even researchers involved in vaccine design and testing have expressed reservations because of the potential that the approval process could be swayed by political, not just scientific, considerations. “I’m going to be looking at the safety data before I put a shot in my kids’ arms,” says Kurt Viele, director of modelling and simulation at Berry Consultants, which advises on clinical-trial designs, in Lexington, Kentucky.

Distrust is not limited to the United States. In Europe, closed-door negotiations with companies over vaccine procurement are stoking vaccine hesitancy, says Yannis Natsis, a policy manager at the advocacy group European Public Health Alliance in Brussels. “We don’t want to give vaccines a bad name, we want to defend confidence in vaccines,” he says. “But there is an incredible lack of transparency.”

In the United States, a pathway for fast-tracking urgently needed treatments — an FDA Emergency Use Authorization (EUA) — has been part of the concern. The EUA sidesteps the usual drug-approval process and allows treatments to be used if they “may be effective”. “In being vague and non-transparent, it’s potentially susceptible to the appearance of political influence,” says Herschel Nachlis, who studies health policy at Dartmouth College in Hanover, New Hampshire.

Two EUAs for putative COVID-19 treatments — the malaria drug hydroxychloroquine and infusions of antibody-rich blood plasma from people who have recovered from the disease — have raised concerns of political interference. Trump advocated both treatments, and neither had support from large, randomized, double-blind trials, the gold standard of clinical research. The hydroxychloroquine EUA was revoked after clinical-trial data showed that it is not effective in people hospitalized with COVID-19. The plasma EUA was announced one day before a major convention held by Trump’s political party.

So when companies released clinical-trial protocols for the three leading vaccine candidates last week, researchers were quick to pore over the details. Overall, the protocols looked fairly normal, says David Benkeser, a biostatistician at Emory University in Atlanta, Georgia.

But one feature stood out, says Benkeser. In Pfizer’s protocol, external experts assigned to monitor the trial’s safety are allowed to take a peek at the interim data more often than they are in the other two companies’ documents. This means that an analysis of early results could be carried out after the trial has accrued data from just 32 people who become infected across its vaccine and placebo arms. This milestone could be reached in as little as three months from the trial’s July start date — potentially before the US election.

If early analysis found that the vaccine was convincingly effective at reducing infections in that small sample size, the trial could be stopped and the company could apply for an EUA. But although it would be possible to show that the vaccine works well enough to meet the FDA’s standard at that early stage, it would not allow for long-term follow-up to assure the vaccine’s safety, says Viele. Three months is also too short to get a good sense of how long immunity from the vaccine lasts, he notes. Pfizer did not respond to questions about the rationale behind its clinical-trial design, or whether it plans to continue safety monitoring if a trial is stopped early.

It will be crucial for the company to continue collecting safety data even if the trial is stopped early, and to make safety data available to reassure a worried public, says Viele.

The FDA is rumoured to be beefing up its EUA process for COVID-19 vaccines. The agency will soon require a level of data closer to that of a normal approval than it has for its previous COVID-19 EUAs, according to a 22 September report in The Washington Post. The FDA declined to comment on the specifics of the news story, but Trump has already said that he might block such measures.

Nachlis also notes that an external FDA advisory board is likely to discuss a vaccine in a public hearing, making the deliberations more transparent than for the previous EUAs. “We need to increase the robustness of the stringency and transparency,” he says. “And I think there’s been substantial movement on that front.”

Even if regulators do approve the three front-runner vaccines, researchers warn that the jabs might not do what the public expect.

The AstraZeneca, Pfizer and Moderna protocols revealed that the trials are designed to test whether the vaccines reduce cases of symptomatic COVID-19, not cases of severe disease, such as those that require hospitalization and can end in death.

MacIntyre and other researchers say it would have been better to test whether the vaccines reduced severe disease and death. If a jab can successfully reduce the risk of serious complications, then the virus would have a similar effect on vaccinated people as the common cold, she says.

The current phase III trials are each enrolling several tens of thousands of participants. But a trial that tried to establish whether a vaccine reduces incidence of severe COVID-19 would need more — and so would take more time, says Thomas Lumley, a biostatistician at the University of Auckland in New Zealand. The current trials chose a middle path between establishing whether vaccines prevent any infection with the virus and testing whether they prevent severe infection, he says.

The companies are aiming for the vaccines to stop at least 50% of vaccinated people getting symptomatic COVID-19, the definition of success in the FDA guideline, but they are hoping for an efficacy of 60% or greater.

But even 60% would not be enough to reach herd immunity, in which enough of the population has vaccine-derived immunity to stop the disease spreading, says Lumley. To achieve that goal, a vaccine would have to be at least 80% effective to account for the fact that not everyone in the population will receive it, says MacIntyre.

Still, vaccinating a large portion of the population with one of these jabs would go a long way to controlling the spread of the virus if used with other interventions, such as wearing masks and contact tracing, says Lumley. “A modestly effective vaccine would be a really big help,” he says.

Decoding the Disinformation Machine
Microsoft, in climate pledge, to buy jet fuel made with waste oil for Alaska Airlines
Alexandra Cousteau Wants To Restore The Oceans By 2050
Daily briefing: A popular unproven COVID treatment is hindering drug trials
How LGBT+ scientists would like to be included and welcomed in STEM workplaces