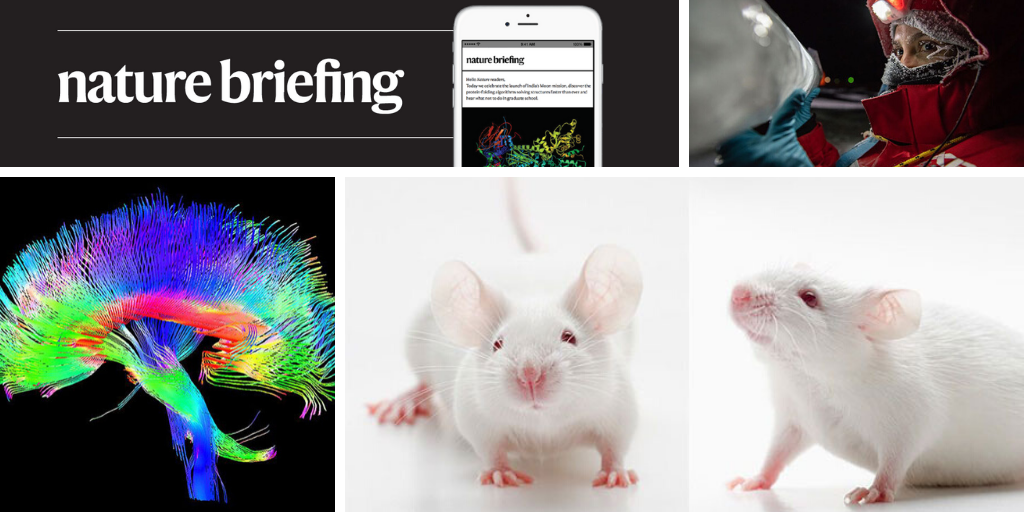 Researchers have used a machine-learning algorithm to decipher the seemingly inscrutable facial expressions of laboratory mice. For example, a mouse experiencing pleasure pulls its nose down towards its mouth, and pulls its ears and jaw forwards. By contrast, when in pain, it pulls back its ears and bulks out its cheeks, and sometimes squints. The work “is an important first step” in understanding some of the mysterious aspects of emotions and how they manifest in the brain, says neuroscientist David Anderson.

After a long and contentious struggle, mathematician Shinichi Mochizuki has had his 600-page proof of the abc conjecture — one of the biggest open problems in number theory — accepted by a journal. If confirmed to be true, the proof confirms a profound link between the addition and multiplication of integer numbers. Critics have complained that the proof is impenetrable, and it was largely deemed flawed after two authoritative mathematicians circulated a rebuttal in 2018. Some also lament the poor optics of publishing the paper in a journal of which Mochizuki is chief editor — although that is not unheard of in maths.

For the first time, superconductors have been found in meteorites. The tiny particles of alloys containing indium, lead and tin would have formed in extreme environments, such as during planetary collisions. Researchers analysed meteorites using magnetic-field-modulated microwave spectroscopy to find where tiny amounts of superconducting materials were hiding. They then used a ‘divide-and-conquer’ technique, progressively breaking the meteorites into smaller grains to pinpoint the superconducting particles. In the coldness of space, these particles might affect planetary formation.

The tide is turning in favour of face masks

There has been a clear divide among nations on the public use of face masks — from commonplace in much of Asia, to strongly dissuaded (until recently) in the United States, to obligatory in the Czech Republic. But their use is gaining momentum — and evidence is growing that the benefits of wearing basic face masks in public outweigh the downsides.

• Since early reports revealed that a new coronavirus was spreading rapidly between people, researchers have been trying to pin down whether it can travel through the air. Health officials say the virus is transported only through droplets from coughs or sneezes — either directly, or on objects. But some scientists say there is preliminary evidence of airborne transmission — in which the disease spreads in the much smaller particles from exhaled air. (Nature | 7 min read)

• The United States — which today has a quarter of all the confirmed cases in the world — is set to announce a new policy recommending that people use basic face coverings when in public. (BBC | 5 min read)

• A Nature Medicine paper published today found that surgical face masks could prevent transmission of human coronaviruses and influenza from people with symptoms. The 5-year study (which used this amazing-looking sneeze-detecting machine) is a significant addition to a debate that has struggled to make sense of conflicting evidence. But some worry that masks will create a false sense of security, or deplete supplies for front-line health workers. (The Atlantic | 13 min read)

Governments across the world are relying on mathematical projections to help to guide decisions in this pandemic. But much information about how SARS-CoV-2 spreads is still unknown and must be estimated or assumed — limiting the precision of forecasts. Epidemiologist Neil Ferguson, a member of the Imperial College London team that has most influenced the British response to the outbreak, explains exactly how the process works.

Total confirmed cases of COVID-19 worldwide as of 2 April. Because many patients are not tested, the true number of cases is probably much higher. (Nature | Continuously updated)

Physician and public-health researcher Ashwin Vasan responds to location data showing that many people with lower incomes don’t have the luxury of staying at home. (The New York Times | 9 min read)

“As young scientists, we want to be involved in shaping the landscape that determines our day-to-day work, since we are the ones who will benefit most (namely, for the rest of our careers)”, write three early-career researchers. As members of a student-run think tank, Young SiT, they call on universities to implement fairer evaluation methods that promote professional diversity and growth, not just publication metrics.

This week, in the coronavirus-free Nature Podcast, we look at evidence from deep below the sea-floor that there was a verdant forest on Antarctica around 90 million years ago.

In Nature’s new coronavirus podcast, Coronapod, we explore how low- and middle-income countries are preparing for the pandemic.

Subscribe to the Nature Podcast on iTunes, Google Podcasts or Spotify.

Scientists facing the daunting task of describing the brain conventionally conjure up different kinds of metaphor. The problem comes when we forget that they are descriptors, and see them instead as natural properties, writes historian Stephen Casper. Casper reviews a new book by biologist and historian Matthew Cobb, which provokes contemplation about how some metaphors burden us with invisible assumptions made in the past.

Andrew Robinson’s pick of the top five science books to read this week includes the neuroscience of navigation, a world of ice, and a black inventor reconstructed.

Marine biogeochemist Maria Josefa Verdugo spent last winter living and working on a ship locked in the ice as part of the first year-round expedition to explore climate in the far north. “I’m from Chile, and I didn’t grow up around a lot of cold, snow and ice. But I’ve learnt to embrace it,” says Verdugo. “Everything’s cold when you’re handling an Arctic Ocean ice core.” (Nature | 3 min read)