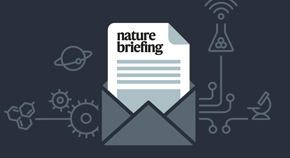 Hello Nature readers, would you like to get this Briefing in your inbox free every day? Sign up here.

The International Space Station (ISS) was briefly pushed out of position when the engines of a newly arrived Russian module started firing inadvertently. The malfunction happened three hours after the 20-tonne module — called Nauka — docked with the station, following an eight-day journey from Earth during which it experienced propulsion issues. Thrusters were activated on other modules to restore the ISS to its correct orientation. “What we saw today was just an awesome job by the mission control flight teams,” says Joel Montalbano, NASA’s ISS programme manager. “Those guys were rock stars.”

Research papers published by women in elite medical journals are half as likely to be cited as are similar articles authored by men, a study of citation data has found. The work, which looked at more than 5,554 articles published between 2015 and 2018, “shows just how much impact unconscious biases can have”, says oncologist Reshma Jagsi. Citations are considered a key measure of a paper’s importance, and are often taken into account by those who make hiring and funding decisions.

Many researchers and doctors take it as a given that obesity means ill health. But geneticist Ruth Loos says that “we can be obese but remain healthy”. Many people with obesity have healthy cholesterol and blood glucose levels, for example, while many lean people do not. Loos and other researchers are examining genes, animal models and people to understand how factors such as the nature and distribution of fat in the body can blunt or compound any health impacts of extra weight.

In India, caste discrimination is illegal, and government rules require that 15% of students and staff at public research and education insitutes come from Dalit communities — formerly known as untouchables. But an investigation of India’s flagship scientific institutions finds that most did not meet that threshold for researchers admitted to doctoral programmes. The numbers are even lower for senior academics. Interviews with Dalit scientists reveal how systematic discrimination, institutional barriers and frequent humiliation make it difficult for them to thrive at every step.

Andrew Robinson’s pick of the top five science books to read this week includes a study of pain in the brain, the struggle for climate justice and an alternative approach to conservation.

Podcast: Eavesdropping on a glacier’s base

In this week’s podcast, we hear about one researcher’s unorthodox attempt to listen in to the seismic whisper at the foot of a Greenland glacier — a method that might reveal more about conditions under these enormous blocks of ice. Plus: researchers debate whether an ancient fossil is the oldest animal yet discovered.

“Other than primates, the cat-human comparison is one of the closest you can get.”

Feline genomes are remarkably similar to human ones, says cat genetics expert Leslie Lyons. Studying them could help us treat diseases in both species. (The Atlantic | 7 min read)

Today, avian explorer Leif Penguinson is staycationing in Antarctica. Can you find Leif among his Emperor penguin friends?

The answer will be revealed in a future e-mail, all thanks to Briefing photo editor and penguin wrangler Tom Houghton.

This newsletter is always evolving — tell us what you think! Please send your feedback to briefing@nature.com.

With contributions from Smriti Mallapaty

Able to power 50,000 homes, the ‘world’s largest floating wind farm’ takes another step forward
Hubble has captured the startling ‘eye’ of a massive stellar explosion
Bright lights at night scramble the sweet song of crickets
Space Force to brief industry on its future architecture for space-based missile warning
Interstellar Visitors Could Vanish in Space Before We Ever See Them. Here’s Why