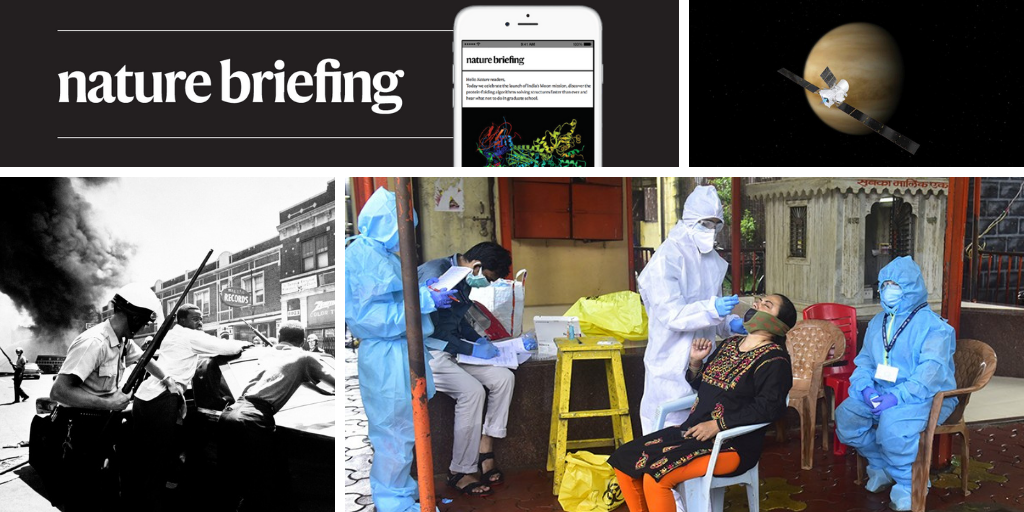 The US has granted emergency-use approval for a credit-card-sized device that tests for the coronavirus. It costs US$5, gives results in 15 minutes and doesn’t require a laboratory or a machine for processing. The tests detect specific proteins — known as antigens — on the surface of the virus. These tests are a key element in the testing strategies of other countries, such as India and Italy.

Antigen assays are much faster and cheaper than the gold-standard polymerase chain reaction tests, which detect the virus’s RNA. Antigen tests are less sensitive, and could potentially be self-administered at home. This makes for a double-edged sword. Less sensitivity might mean not detecting people who are infected, but it could help if it clears those who have the virus but are no longer infectious to others. Home use could help to expand testing, but might give people a false sense of security, hinder efforts to trace people’s contacts or lead to inequalities in who has access.

From obscure acronyms to unnecessary jargon, research papers are getting harder to read – even for scientists. Statisticians analysed the use of acronyms in more than 24 million paper titles and 18 million abstracts and found that the use of acronyms is commonplace and on the rise. Of the roughly 1.1 million acronyms identified, the vast majority (79%) were used fewer than 10 times in the scientific literature. “Scientists love to write these acronyms,” says statistician Adrian Barnett, “but other scientists don’t necessarily pick them up, and they end up hanging around and causing a lot of confusion.”

The discovery of phosphine in Venus’s atmosphere has space agencies scrambling to see whether spacecraft currently exploring the Solar System can take a closer look. They want to confirm the presence of the molecule, and dig deeper into the thrilling question of whether it might be a sign of life. The European Space Agency’s BepiColombo will make two flybys of Venus on its way to Mercury — in October and August — and it could possibly detect phosphine. “[On the first flyby] we have to get very, very lucky,” says planetary scientist Jörn Helbert, co-lead scientist on a spectrometry instrument that is on board BepiColombo. “On the second one, we only have to get very lucky. But it’s really at the limit of what we can do.”

A cold-war-era corporation targeted voters and presaged many of today’s big-data controversies, writes historian and author Jill Lepore. Her new book explores how the Simulmatics Corporation’s efforts in the tumultuous 1960s United States foreshadowed those of today’s technology companies to sway elections and predict the electorate’s response to inequality and racism.

Despite our intimate familiarity with fire, we still struggle with a complete understanding of it. From candles to wildfires, Chemistry World investigates what we know about how and why things burn.

Survival rates have significantly improved for intensive-care patients since the start of the pandemic. The heroic efforts of health-care workers — sometimes at the cost of their own well-being — have cut death rates by 10%, according to one global analysis. They have ramped up collaboration, fine-tuned the use of ventilators and identified effective treatments and interventions to help to save more people with the most-severe cases of COVID-19.

When materials scientist Sirous Asgari declined to spy on his home country of Iran for the United States, he became snarled in a Kafkaesque battle with the US criminal and immigration systems, reports The New Yorker. The country accused him of stealing trade secrets for Iran before he was cleared in a US court of all charges. The same day, “he began a seven-month descent down a spiral of squalor, into a vast carceral system beyond the reach of the U.S. judiciary. Within the realm of ICE [the US immigration agency] there would be no public documents, no legal hearings” — only uncertainty, and the looming threat of COVID-19.

There is no such thing as apolitical science, argues the editor of Science, chemist H. Holden Thorp. (Wired | 9 min read)

How China could be carbon neutral by mid-century
On this day
Ask Ethan: Will Earth’s Temperature Start Decreasing Over The Next 20,000 Years?
Twitter backtracks and allows users to share New York Post story about Bidens
Solar ETF soars as Biden leads in polls. Other groups that could benefit from a Democratic win