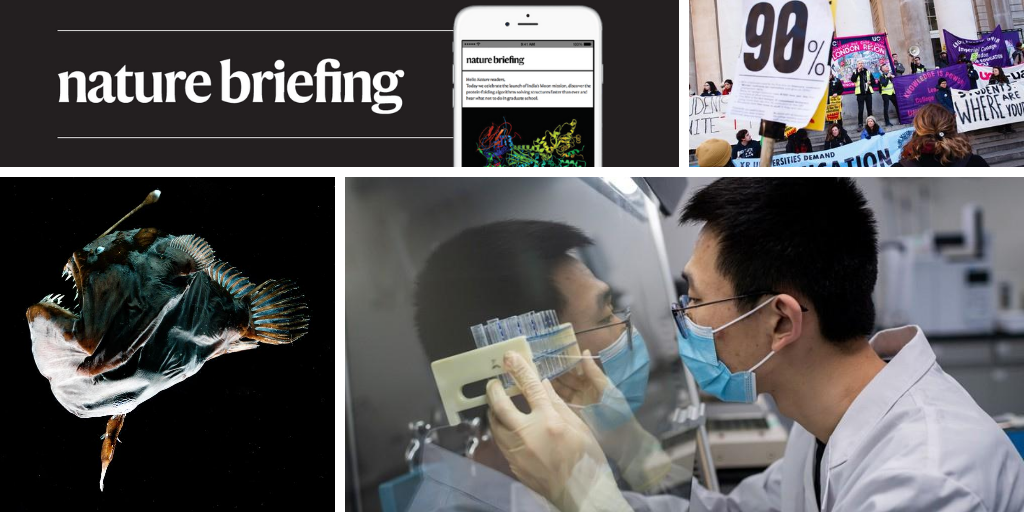 Genetic analysis has shed light on the notoriously bizarre mating ritual of the anglerfish. When these deep-sea fish mate, the male fuses its tissues with those of the much-larger female. For decades, scientists have been puzzled about how individuals are able to merge without triggering an immune response. Now, genetic tests on museum specimens and preserved anglerfish have shown that species that fuse to their mates lack genes that are important for the formation of key parts of the immune system. “It’s been an enigma, and it’s wonderful to think that we’ve finally got an answer,” says evolutionary biologist Ted Pietsch.

Chinese companies are leading global efforts to create a vaccine for the coronavirus, with more than half a dozen candidates in clinical development. The speed at which vaccine-makers are moving has raised hopes around the world. But as several potential vaccines enter phase III trials, a crucial stage of testing that is needed to prove efficacy and secure approval from regulators, companies could struggle to enrol enough trial participants, or to gather enough data to convince regulatory agencies that the shots work.Nature | 5 min read

Tough times ahead for universities

A survey of 200 university administrators worldwide about the effects of COVID-19 on institutional finances paints an uncertain future for early-career academic researchers. The survey, conducted by the London-based publication Times Higher Education, finds that 12% of respondents are planning redundancies for faculty members and staff in the next 6 months, with 19% planning furloughs or compulsory paid leave, and 12% planning pay cuts.

The technology to enable a car to complete a journey without human input is advancing rapidly. But there are still fundamental challenges to be overcome. Software engineer John McDermid explains five of the biggest remaining obstacles to producing safe, fully autonomous vehicles. These include the thorny issues of regulation and social acceptability as well as technical challenges. “There is, of course, a race to be the first company to introduce a fully self-driving car,” McDermid says. “But without collaboration on how we make the car safe, provide evidence of that safety, and work with regulators and the public to get a ‘stamp of approval’, these cars will remain on the test track for years to come.”

For decades it’s been known that stretching skin causes more skin to grow, but the reasons why have been a mystery. On this week’s Nature Podcast, we hear from researchers who have uncovered a mechanism to explain the phenomenon.

Experimental physicist Sheila Rowan works with laser beams and suspended mirrors to sharpen the detection of collapsing stars and other celestial events. “Here, in my laboratory at the University of Glasgow, UK, I’m reflected in a mirror attached to glass fibres,” she says. “By measuring how laser light at two different frequencies reflects off the interface between the mirror and the glass, just as my image does off the mirror, we can work out the thickness of the bond and other properties that are important for designing optical systems.” (Nature | 3 min read)

Climate scientist Dave Reay says that climate change is having an increasing impact on weather conditions in the United Kingdom. (The Guardian | 3 min read)

We are launching an Arabic edition of Nature Briefing. Every week for the next six months, the Arabic edition will help you stay up to date with the latest developments and news in science.