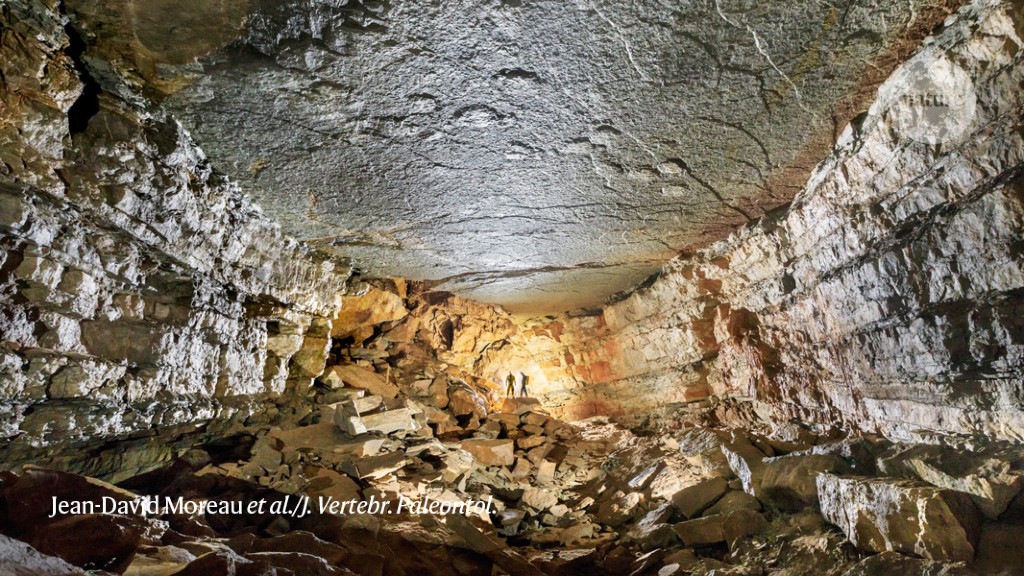 A scientist exploring deep inside a cave in France has discovered huge dinosaur footprints, measuring up to 1.25 metres long, made by some of the largest creatures ever to walk the Earth.

According to Jean-David Moreau at the University of Burgundy–Franche-Comté in France and his colleagues, the footprints probably belong to an unknown species of titanosaur, a category of long-necked herbivorous dinosaur that includes the heaviest and longest land animals in the planet’s history. The tracks were made 166 million to 168 million years ago, when three dinosaurs traversed the shoreline of a sea. The site was then at the planet’s surface, but geological processes have buried and tilted the sediments, and the prints are now on the cave’s roof, 500 metres underground.

Dinosaur footprints have often been discovered in mines and railway tunnels, but they are rarely found in natural caverns. The tracks were a chance discovery by one of the authors on a caving expedition in 2015. It’s a wonder they were ever found, as they can be reached only by way of a labyrinth of tight, frequently flooded crawl spaces 100 metres in length.

After oil’s best month ever, these are the key levels to watch
U.S. states sue Trump administration over fuel efficiency rollback
What’s Inside A Rattlesnake’s Tail?
4 views on the future of retail and the shopping experience
Dual-layer spectral CT proves feasible for routine practice – Physics World