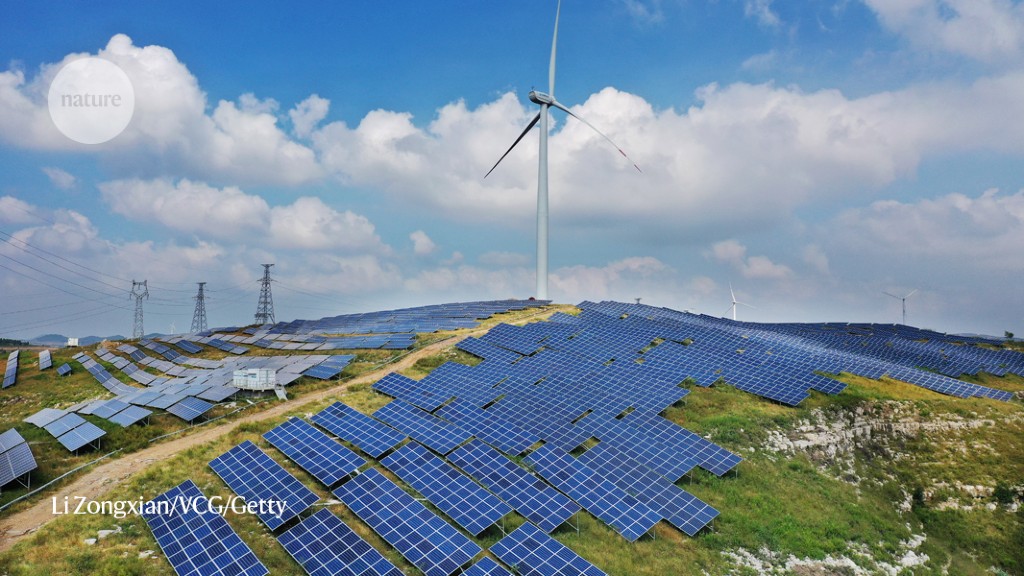 China, the world’s largest emitter of carbon dioxide, has promised to become carbon neutral before 2060, and to begin cutting its emissions within the next ten years.

President Xi Jinping made the ambitious pledge to a virtual audience of world leaders at a meeting of the United Nations General Assembly last month. The news came as a surprise to many researchers, even in China, who weren’t expecting such a bold target. It’s the country’s first long-term climate goal, and will require China to rein in CO2 and probably other greenhouse gas emissions to net zero, which means offsetting gases that are released, for example by planting trees or capturing carbon and storing it underground.

In the wake of the announcement, Nature explores several proposals from influential research groups that work closely with the government for how China could reach neutrality before 2060. The plans differ in their details, but agree that China must first begin to generate most of its electricity from zero-emission sources, and then expand the use of this clean power wherever possible, for example switching from petrol-fuelled cars to electric ones. It will also need technologies that can capture CO2 released from burning fossil fuels or biomass and store it underground, known as carbon capture and storage (CCS).

The news of China’s carbon neutrality target is a “game-changer” for the global climate and could encourage other countries to act faster than they otherwise would have, says Mark Levine, a retired energy-policy researcher at Lawrence Berkeley National Laboratory in Berkeley, California.

For China to achieve its target, electricity production would need to more than double, to 15,034 terawatt hours by 2060, largely from clean sources, according to a proposal developed by Zhang Xiliang, a climate modeller at Tsinghua University in Beijing. This growth would be driven by a massive ramp-up of renewable electricity generation over the next 40 years, including a 16-fold increase in solar and a 9-fold increase in wind. To replace coal-fired power generation, nuclear power would need to increase sixfold, and hydroelectricity to double.

Fossil fuels, including coal, oil and gas, would still account for 16% of energy consumed, so would need to be paired with CCS or offset by new forest growth and technologies that can suck CO2 directly out of the atmosphere.

Xiliang’s model, developed with the Massachusetts Institute of Technology in Cambridge, was part of a major national project on China’s low-carbon future, led by Tsingua University’s Institute of Climate Change and Sustainable Development. The work was presented at a meeting attended by environment officials on 12 October. “Our model is the primary one to support government policymaking,” says Xiliang.

But shifting China’s economy away from its dependence on fossil fuels in such a short time will be expensive, says Levine. Coal-fired power accounts for almost 65% of the country’s electricity generation, with more than 200 new coal-fired power stations planned or under construction. “There will be tremendous opposition” from industries that rely on fossil fuels, he says.

Frank Jotzo, an environmental economist at the Australian National University in Canberra, says that a major cost will be the energy storage required to integrate wind and solar at such scale.

But battery storage has become cheaper over the past decade, and that could bring costs down, says Gang He, an energy-systems modeller at Stony Brook University in New York. If trends in the cost of renewables technology continue, more than 60% of China’s electricity could come from non-fossil fuels by 2030, says Gang. “That is quite encouraging.”

However, ensuring stable operation of the electricity grid, given the intermittent nature of wind and solar power, will be another challenge, says Yu Sha, an energy researcher at the University of Maryland, in Washington DC, who has also worked on modeling China’s energy system.

Other teams have also envisioned a carbon-neutral future for China. A scenario led by energy modeller Jiang Kejun, at the Energy Research Institute, National Development and Reform Commission (NDRC) in Beijing, would see emissions peak as soon as 2022, at around 10 gigatonnes of CO2, followed by a steep drop to net zero by 2050.

This means that China’s nuclear capacity — currently 49 gigawatts across some 50 nuclear power plants — would need to increase fivefold, to 554 gigawatts by 2050, through rapid construction of new sites.

According to Jiang’s analysis, nuclear power can supply a more consistent base load of power than can solar and wind. He adds that the latest nuclear-plant designs are safe and produce minimal radioactive waste.

But many researchers are sceptical about nuclear’s potential. The cost and time required to build the plants has increased significantly, says Xiliang. And the 2011 meltdown at the Fukushima Daiichi nuclear power station in Japan has made building plants inland unacceptable to much of the public, he says.

Jiang’s model, which has informed government policies, also assumes that industries making up a large share of China’s energy demand, including steel, building and chemicals, have already peaked or are on the verge of doing so, which remains to be seen. But it relies on the idea that a fast drop in emissions will follow the falling costs of renewables, something that has been borne out when it comes to solar power over the last decade.

Jiang’s analysis also points to another crucial sticking point among researchers — the role of CCS. The model proposes that some 850 gigawatts of power generated from coal, gas and biofuels could be fitted with technologies that capture and store carbon emissions.

A “stringent climate target requires substantial deployment of CCS”, says Hongbo Duan, a climate economist at the University of the Chinese Academy of Sciences in Beijing, who has developed a model that also requires considerable use of the technology.

But this would require significant investment, because China currently has only one large CCS facility in operation, at an oil field. Seven more facilities are being planned or built. CCS would allow China to continue using some coal-fired power in the long term, but some researchers say the technology is still very expensive, which limits its application.

Many researchers think China should stop building new coal-fired power plants. Existing plants will reach the end of their life before the neutrality deadline in 40 years, says Kaare Sandholt, an energy systems modeller at the NDRC’s China National Renewable Energy Centre, who is based in Copenhagen.

But in making the shift, says Gang, China also needs to consider the well-being and economic security of some 3.5 million workers in the coal mining and power industry, as well as the many people who rely on cheap electricity and heating.

The path the country will follow to reach neutral emissions will probably become clearer in the coming months. China, like all nations that have signed the 2015 Paris climate agreement, is obliged to submit increased emissions-reduction targets before the end of the year.

At the Beijing meeting last week, He Jiankun, dean of Tsinghua University’s Institute of Low Carbon Economy, proposed increasing the target for the proportion of China’s energy that is produced by non-fossil-fuels in 2030 from 20% to 25%, and bringing the 20% goal forward to 2025. He says he thinks the neutrality target includes all greenhouse gases, including methane.

Officials are in the process of drafting the country’s latest five-year plan for social and economic development, which will be released in March and is expected to include policies to achieve neutrality.

A detailed breakdown of energy and climate targets will show how serious China is about reaching its carbon-neutrality goal, says Zhang ZhongXiang, an economist at Tianjin University.