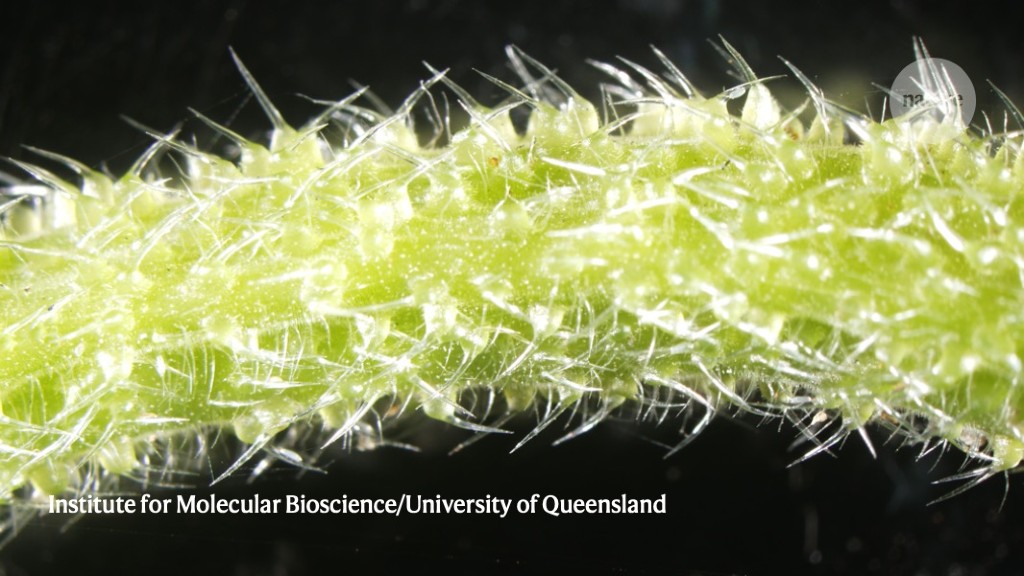 The unrelenting pain from an Australian tree’s sting is caused by newly identified peptides resembling those in spider venoms.

The leaves and stems of the giant stinging tree (Dendrocnide excelsa) carry what looks like an inviting fuzz, but is actually numerous tiny needles. When a passer-by brushes against the tree, the needles can inject their skin with a venom causing intense pain that sometimes lasts months and resists even morphine. Various molecules have been proposed as the venom’s active component, but none adequately accounted for the severity and duration of the pain.

Irina Vetter and Thomas Durek at the University of Queensland in Brisbane and their colleagues ventured out to harvest leaves of wild D. excelsa and the closely related tree Dendrocnide moroides. Chemical analysis of the venom-injecting needles revealed a previously unknown family of peptides. The researchers named them gympietides after gympie-gympie, the trees’ name in the Indigenous Gubbi Gubbi language.

Further investigation showed that gympietides not only generate pain signals, but also suppress a mechanism that stops those signals. The authors, all of them Dendrocnide victims, hope their findings spur research to develop a gympietide antidote.

EPA @ 50, and what it says about you and me
Accidentals By Susan M. Gaines — Review
Pandemic-Inspired Sales Of Telescopes Are Surging. Here’s The Naked Truth About Them You Need To Know
BP, Shell, oil giants fund research into mobile carbon capture from ships at sea
Remote schooling in the pandemic has made Chromebooks a bigger force in the computer market