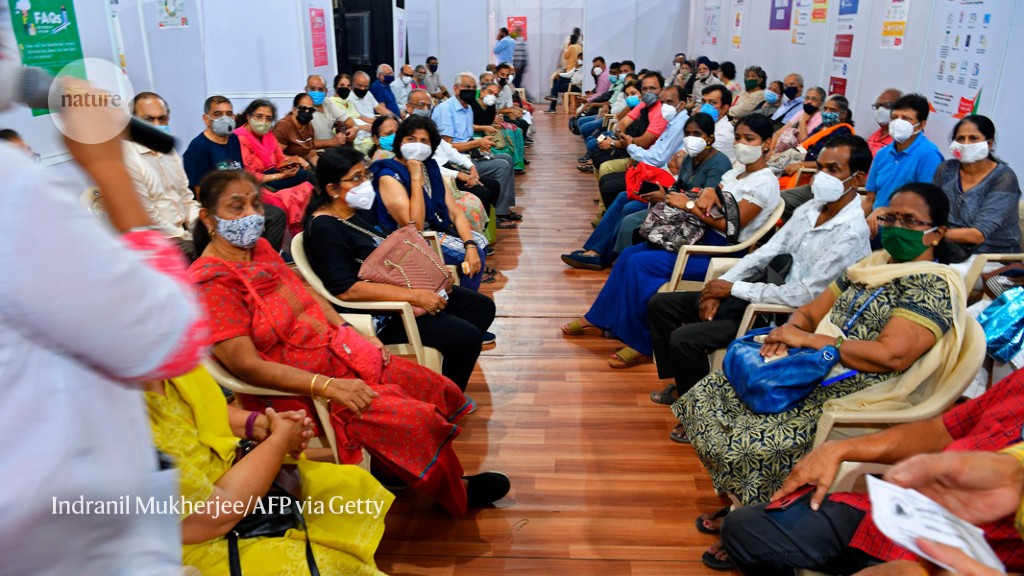 India, one of the world’s biggest suppliers of vaccines, is facing a COVID-19 vaccine crunch, partly due to an explosion of cases linked to new variants. This spells trouble for many countries relying on Indian-made vaccines supplied through the World Health Organization’s COVAX initiative for equitable access to vaccines.

On 12 April, India reported 168,912 new COVID-19 cases, its highest daily total yet. It has now had more than 13.5 million confirmed cases in total, overtaking Brazil as the world’s second-worst hit country, behind the United States.

“While new variants are surfacing in India, a decline in COVID-appropriate behaviour such as wearing masks and social distancing is adding to their faster spread,” says Randeep Guleria, director of the All India Institute of Medical Sciences in New Delhi.

By 14 April, more than 111 million people had been vaccinated in the country. But in March, fears of vaccine shortages led to the government temporarily halting exports of a version of the University of Oxford–AstraZeneca vaccine known as Covishield, which is produced by the Serum Institute of India (SII), based in Pune.

The SII, the world’s largest manufacturer of vaccine components, was expected to provide many of the doses for COVAX. But a fire at a facility in January is part of the reason that it hasn’t yet been able to live up to its production target of 100 million doses per month. Currently it produces between 60 million and 65 million per month.

Last June, AstraZeneca, which is based in Cambridge, UK, announced that it had licensed the SII to supply a total of one billion doses of Covishield for low- and middle-income countries. But only 64 million had been exported before the halt in exports last month, 28 million of which went to COVAX.

Earlier this year, chief executive Adar Poonawala said on Twitter that the SII had been directed by the Indian government “to prioritise the huge needs of India and along with that balance the needs of the rest of the world”.

India’s battle with a surge in cases could delay planned deliveries of Covishield to 64 lower-income countries through COVAX, according to a 25 March statement by initiative member Gavi, the Vaccine Alliance, a health partnership based in Geneva, Switzerland.

Domestically, India previously aimed to vaccinate 300 million people at high risk by the end of July, including 30 million health-care and front-line workers, and people with underlying health conditions. But state officials have complained of vaccine shortages.

Guleria argues that there are sufficient vaccines, but that they must be redistributed to the regions with the most infections.

Besides the SII, a second Indian company — Hyderabad-based Bharat Biotech — was given permission in January for emergency use of its own vaccine, Covaxin. The company, which developed the vaccine in collaboration with the Indian Council of Medical Research, can make 12.5 million doses each month, but these represent only a small proportion of the doses administered in the country so far.

Part of the solution to the current woes will be approving several other internationally developed vaccines that have manufacturing partners in India, such as Johnson & Johnson’s single-shot vaccine, says Shaheed Jameel, a virologist at Ashoka University in Sonipat. On Tuesday, India approved the use of Russia’s Sputnik V vaccine, which the government says will be imported until domestic production can begin.

In March, India’s health ministry said that gene sequencing by a consortium of ten national research laboratories has shown that several variants of the coronavirus are circulating in the country — including the B.1.1.7 variant first detected in the United Kingdom, which can spread more quickly than earlier variants.

The B.1.1.7 variant has been extensively reported in Punjab state and it is “likely that this mutant will move to neighbouring states and become the dominant mutant”, says Guleria.

But Indian scientists are particularly interested in reports of a newly discovered variant with two mutations that do not match previously catalogued variants of concern. The ‘double mutant’ has been found in 15–20% of samples from Maharashtra, India’s worst-hit state, says Jameel.

Little has yet been published on this variant, but Jameel says there is cause for concern. “The two mutations are likely to improve the virus’s binding capacity to the receptors and evade antibodies,” he says.

India must “conduct post-vaccine surveillance”, he argues, to find out whether vaccinated individuals are becoming infected, owing to mutating viruses or waning immunity.

A surface stays frost-free by showing water drops no mercy
The road to electric vehicles is paved with disruption
A pregnant ancient Egyptian mummy has been discovered in a shocking world first
How Do Cosmic Particles Break The Universe’s Energy Limit?
Apple will spend $1 billion to open 3,000-employee campus in North Carolina