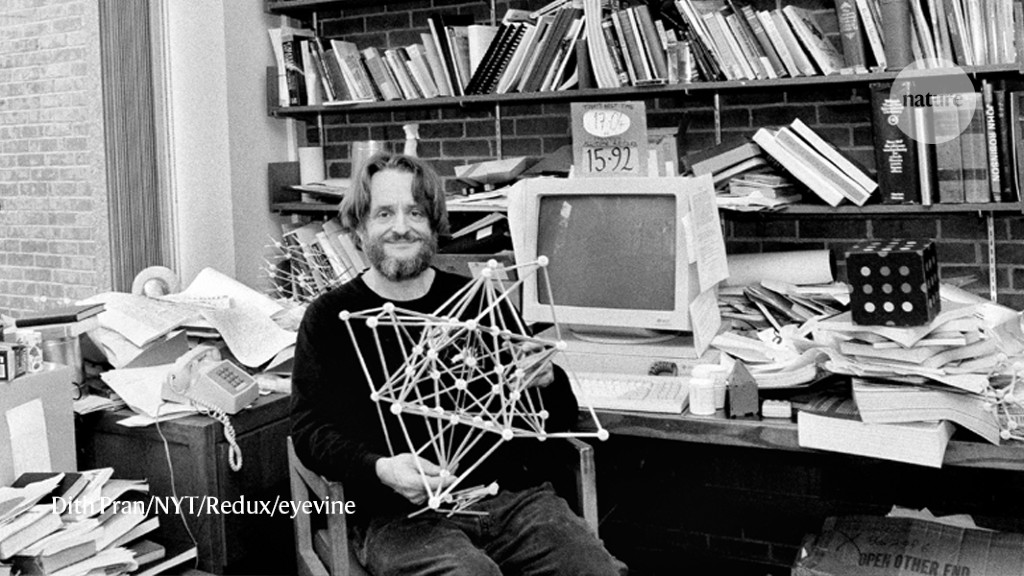 John Horton Conway was one of the most versatile mathematicians of the past century, who made influential contributions to group theory, analysis, topology, number theory, geometry, algebra and combinatorial game theory. His deep yet accessible work, larger-than-life personality, quirky sense of humour and ability to talk about mathematics with any and all who would listen made him the centre of attention and a pop icon everywhere he went, among mathematicians and amateurs alike. His lectures about numbers, games, magic, knots, rainbows, tilings, free will and more captured the public’s imagination.

Conway, who died at the age of 82 from complications related to COVID-19, was a lover of games of all kinds. He spent hours in the common rooms of the University of Cambridge, UK, and Princeton University in New Jersey playing backgammon, Go and other diversions, some of his own creation. Several of Conway’s most celebrated contributions were made while he was thinking about games and their strategies. Perhaps his greatest discovery was a surprising correspondence between numbers and games that led him to a truly gigantic system, the surreal numbers, which stunned the mathematics community. It contained not only the positive and negative real numbers that we all know, but also new infinitely large numbers, infinitesimally small ones, and all sorts of new numbers in between.

Conway’s work on surreal numbers emerged from the influential research project and book Winning Ways for your Mathematical Plays (1982), a compendium of information on the theory of games, written with Elwyn Berlekamp and Richard Guy. This fascination with games also led Conway to develop the Game of Life, a cellular automaton in which the pattern of live or dead cells in a two-dimensional grid evolves according to a set of rules for the ‘birth’ and ‘death’ of each cell, based on the status of its nearest neighbours. The simplicity and accessibility of this game was popularized in 1970 by Scientific American columnist Martin Gardner. By the mid-1970s, it was estimated that one-quarter of the world’s computers were running Conway’s Game of Life as their screensaver.

Conway, who was the John von Neumann professor of mathematics at Princeton University before his retirement in 2013, was born in Liverpool, UK, in 1937. His father made his living playing cards, and later worked as a chemistry laboratory technician at a local high school attended by George Harrison and Paul McCartney. Conway, like his mother, was an avid reader. He showed early interests in mathematics; by the age of 11, he wanted to be a mathematician at Cambridge. He received his PhD from the University of Cambridge in 1964 under the advisership of Harold Davenport, was subsequently hired at Cambridge as a lecturer, and became professor in 1983. In 1987, he moved to Princeton.

Conway first attained fame in 1968 for determining all 8,315,553,613,086,720,000 symmetries of the Leech lattice — a remarkably regular arrangement of points in 24-dimensional space discovered by John Leech in 1967. This led to his discovery of the Conway simple groups, which were fundamental in the classification of finite simple groups — one of the capstone achievements of twentieth-century mathematics.

Conway had a primary role in researching and assembling the iconic symmetry book ATLAS of Finite Groups (1985). His deep knowledge of symmetries led him to propose, with his ATLAS co-author Simon Norton, the Monstrous Moonshine conjectures. These, for the first time, seriously connected finite symmetry groups to analysis — and thus discrete maths to non-discrete maths. Today, the Moonshine conjectures play a key part in physics — including in the understanding of black holes in string theory — inspiring a wave of further such discoveries connecting algebra, analysis, physics and beyond.

Conway’s discovery of a new knot invariant — used to tell different knots apart — called the Conway polynomial became an important topic of research in topology. In geometry, he made key discoveries in the study of symmetries, sphere packings, lattices, polyhedra and tilings, including properties of quasi-periodic tilings as developed by Roger Penrose.

In algebra, Conway discovered another important system of numbers, the icosians, with his long-time collaborator Neil Sloane. In number theory, Conway showed that every whole number is the sum of at most 37 fifth powers. He also developed the 15-theorem (with his student William Schneeberger) and the 290-conjecture; these were vast generalizations of the four-squares theorem, proved by eighteenth-century mathematician Joseph-Louis Lagrange, which states that every positive whole number is the sum of four square numbers (for example, 21 is the sum of 16, 4, 1 and 0).

Conway was a memorable teacher and speaker, and the many tricks he performed to illustrate mathematical concepts included: stating immediately the day of the week for any date in history, twirling a hanger with a penny balanced on its inside edge, contorting his tongue into a variety of shapes, balancing objects on his chin, and delivering entire lectures in which every word he said had only one syllable.

He loved to talk about mathematics and games, as well as history, etymology and philosophy. His contributions to culture, through his work and outreach, will have a lasting impact. For the remarkable profundity of his mathematical discoveries — and the playful and generous way in which he shared these with others — he will be sorely missed.