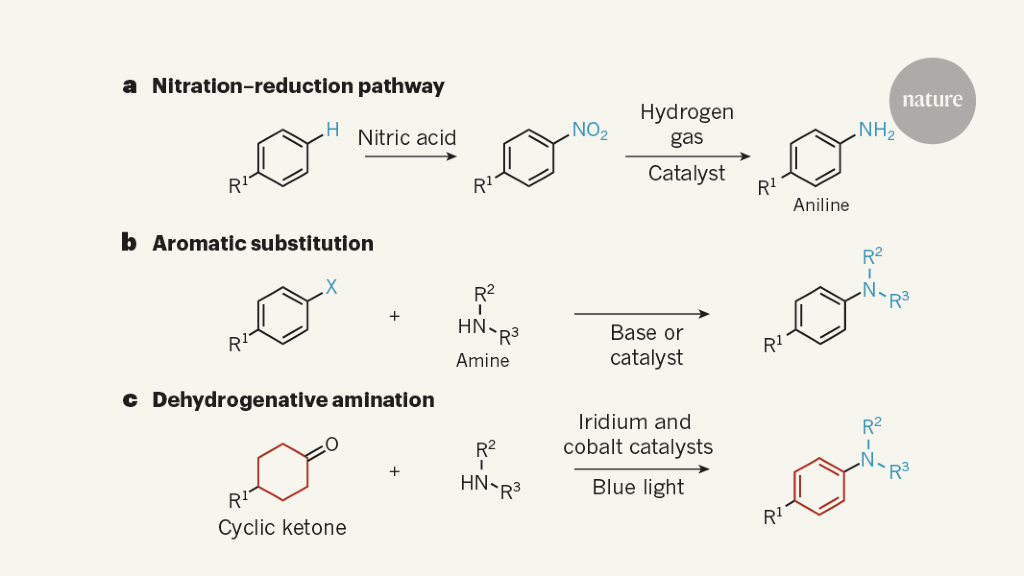 Decades of research have provided chemists with the tools to synthesize a diverse array of organic molecules in short sequences of high-yielding reactions, making use of inexpensive and widely available chemical building blocks. When a new reaction is reported that fundamentally alters the idea of what can be used as a building block, it can be a game changer. Writing in Nature, Dighe et al.1 report one such potentially transformative reaction that uses light and two transition-metal catalysts to make products known as anilines — key ingredients for making pharmaceuticals, agrochemicals, dyes, electronic materials and polymers2,3. 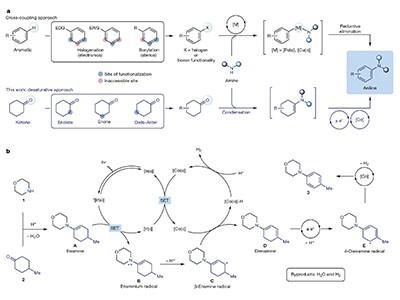 When chemists describe certain organic molecules as being aromatic, they aren’t referring to their smell. They’re actually describing molecules — such as those that contain benzene rings — that have a certain number of electrons interlocked into circular systems, thereby lowering the energy of the molecule concerned. Anilines are benzene rings with a nitrogen atom attached, and do often have a fishy smell. But their odour is one of the least noteworthy things about them.

Aniline groups were present in three of the top ten highest-grossing global pharmaceuticals in 2019 — Eliquis (apixaban), Revlimid (lenalidomide) and Xarelto (rivaroxaban), combined retail sales of which surpassed US$28 billion (see go.nature.com/2dirpwf; ref. 4). Aniline compounds are also precursors for one of the two monomers needed to produce polyurethane materials, which in turn are used to make everything from stretchy fabrics and compressible foams to the wheels of skateboards and rollercoasters5. These are all high-value commercial products, so finding versatile ways to make anilines from abundant chemicals is of great interest.

Simple anilines are generally derived from benzene, toluene and xylenes (BTX) — petrochemicals available at low cost in bulk quantities. These building blocks contain a benzene ring in which a carbon–hydrogen (C–H) bond can be replaced with a carbon–nitrogen (C–N) bond without disrupting the aromatic system, thus producing the nitrogenated aromatic framework of an aniline. This method for making anilines is known as the nitration–reduction pathway2 (Fig. 1a).

Alternatively, carbon–halogen bonds in BTX derivatives can be replaced by C–N bonds6, either using a strong base if the benzene ring is highly activated, or using sophisticated metal catalysts. Such reactions are broadly known as aromatic substitutions (Fig. 1b). Fundamentally, nitration–reduction pathways and aromatic substitutions both revolve around the entrenched idea that complex aromatic molecules are made only from building blocks that already contain aromatic rings. Aromatic frameworks are therefore generally not made from scratch during organic synthesis, but instead are used as raw materials that are ‘decorated’ with other chemical groups.

This is similar to how bakers think about making an apple pie. Apple pies are made using pastry dough for the crust and apples for the filling. Apples are the only ingredient that can be used, because there is no way to make an apple filling from other ingredients. Fortunately for bakers, apples are relatively inexpensive and widely available in most areas, but the resources needed to plant, grow, harvest and distribute the ripened fruit are taken for granted. This parallels the historical use of BTX as cheap, widely available ‘ingredients’ for making more-complex molecular targets. The time-intensive geological process by which crude oil is produced from organic material, and the many resources needed to extract the oil, to isolate BTX from it and to distribute the chemicals for use in manufacturing processes, are also taken for granted.

But what if apples weren’t the only ingredient that could be used for the filling? What if apple seeds — which contain all the basic genetic information needed to produce an apple — and a few speciality spices could somehow be used instead, and still produce a perfect apple pie? In this (admittedly far-fetched) scenario, the idea that apples are the only basic ingredient of an apple pie would have to be altered. Dighe et al. have essentially performed the chemical equivalent of making apple pie from apple seeds.

The authors have leveraged the inherent propensity of nitrogen-containing compounds called amines to react with carbonyl (C=O) groups to form a C–N bond. These reactions produce compounds known as enamines that contain a non-aromatic ring, which can readily lose an electron to a light-activated iridium catalyst (see Fig. 1b of the paper1). Loss of an electron produces a reactive intermediate called an enaminium radical, which contains an unpaired electron. This radical then engages a cobalt catalyst, which removes hydrogen atoms sequentially from the non-aromatic ring, thereby forming the aromatic ring of an aniline. This overall process is termed dehydrogenative amination (Fig. 1c), and it allows anilines to be produced from non-aromatic precursors. 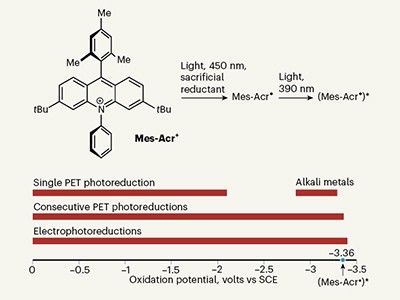 Light-activated iridium catalysts have previously been used for single-electron oxidations7 (processes in which an electron is lost from a molecule), and cobalt catalysts have also been used to remove hydrogen atoms from molecules8. But by melding these two processes together, Dighe et al. have produced a reaction that is greater than the sum of its parts. Other methods for preparing aromatic rings from scratch have previously been reported9,10, but have been challenging to use for organic synthesis.

The authors demonstrate that their reaction can make a wide array of anilines, nearly two-thirds of which contain structural motifs commonly found in biologically active compounds or pharmaceuticals. Indeed, the authors show that their reactions can be used to make seven medicines, including the local anaesthetic lidocaine and the cardiovascular drug vesnarinone. The use of dehydrogenative amination to synthesize those two compounds avoids the problems of the current industrial production routes, which start from aromatic building blocks.

Dighe and colleagues’ reactions might be beneficial when nitration–reduction approaches do not occur selectively at a single C–H bond on an aromatic ring, or when aromatic substitutions are low-yielding or prohibitively expensive. However, nitration–reduction pathways are generally reliable and scalable, and use inexpensive starting materials, and have therefore enabled the industrial-scale synthesis of anilines — this is, in part, why aniline-containing compounds are so widely used. By contrast, the chemical-engineering processes needed to scale up Dighe and co-workers’ light-activated, iridium-catalysed chemistry is unknown, and will be a factor that affects how extensively the reactions are adopted for the production of commercial chemicals. Moreover, iridium is one of the rarest elements in Earth’s crust, limiting supplies of the catalyst and increasing its cost.

Nevertheless, Dighe et al. have shown that aniline synthesis need not be bound by conventions that dictate the use of preformed aromatic rings. Time will tell whether the authors’ reactions will completely replace the status quo, but having the freedom to choose from an increased range of options for making anilines is a wonderful thing.