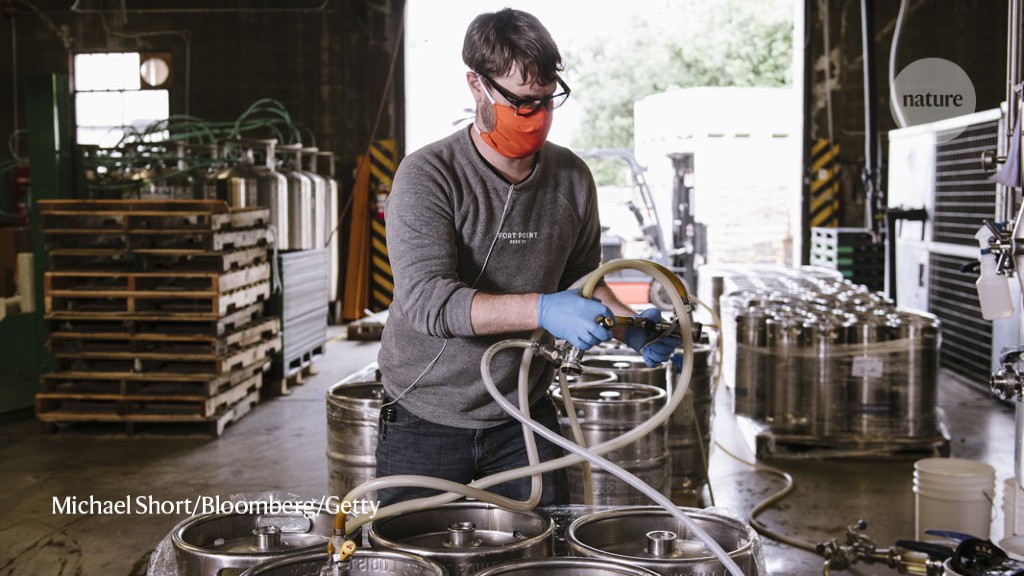 Many scientists start hobbies to take their minds off research and to connect with people outside academia. Some make these pastimes their careers. Nature spoke to four researchers who turned their brewing and fermentation hobbies into business ventures. The scientists — all at different stages in their careers and with varying connections to academic institutions — share their insights.

Andrew Rhodes is an aerospace engineer and founder of the Neighborhood Kombuchery in Morgantown, West Virginia.

I started brewing kombucha tea in 2016 after finishing an internship at NASA’s Johnson Space Centre in Houston, Texas. One of my colleagues was home-brewing the probiotic-rich, semi-sweet, semi-tangy, fermented beverage, and I thought it was delicious and super fun to brew. I brought home a symbiotic culture of bacteria and yeast, or SCOBY, used to produce the tea, and began brewing kombucha as a fun gig during a period when my PhD research at West Virginia University in Morgantown wasn’t going as smoothly as I had hoped. It released my mind from research and gave me an opportunity to work on something that was operating correctly — it gave me a moment of success. 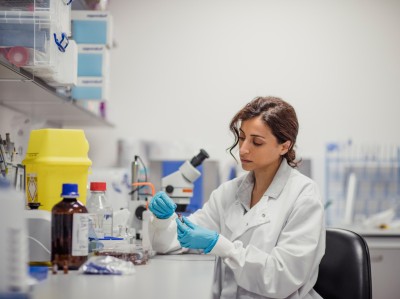 Towards the end of my PhD, I started looking into career opportunities outside university. Along with a passion for teaching, I’ve always wanted to become an entrepreneur. In 2018, my wife and I applied to the West Virginia Business Plan Competition, which is a contest for university students in the state to develop a business plan and receive funding for their idea. We wrote a plan for a kombucha brewery, or kombuchery, performed a feasibility study to determine whether our product was viable in our market, and I gave a 15-minute pitch in front of an audience and judges. In April 2019, we received US$12,000 to start our business.

In summer 2019, my wife and I found a location for the kombuchery and started purchasing equipment. I graduated the following December, so I worked on the business and my PhD together for a while. It was difficult writing a dissertation and then brewing kombucha late into the night. But by having two directions — research and the kombuchery — I maintained my excitement for both.

With kombucha, I’m juggling multiple brewing cycles and different flavours, while also dealing with accounting, distribution and sales. It’s the same as being in a PhD programme, in which you’re writing a journal paper, teaching a course and taking a class. Graduate studies teach you time management. I also learnt public speaking through teaching and presenting at conferences, which helped in the business competition because I felt confident in front of the judges.

A few months ago, I secured a full-time job as a teaching assistant professor in aerospace engineering at West Virginia University. It’s a once-in-a-lifetime opportunity, so I had to take it. I’m not quitting the kombucha business, so I’ll be juggling university and brewing again.

Richard Preiss is a microbiologist and co-founder of Escarpment Laboratories in Guelph, Canada.

I became curious about yeast and beer in 2012, when one of my undergraduate housemates at the University of Guelph in Canada started home-brewing. If you are scientifically minded, home-brewing gives you a chance to practically apply knowledge about biology, chemistry and physics, and at the end of the process, you end up with beer. As a microbiologist, I’m used to thinking about tiny organisms — but a lot of people don’t think about yeast’s role in beer, because it’s less tangible than hops or malt. A lot of the flavour in beer comes from yeast. You have to use a lager yeast to make a lager, for example. The flavour of a saison beer is just pure yeast expression — you’re letting the yeast take centre stage.

Back in 2012, I had access to a research laboratory and started storing some of the yeast I was using for home-brewing in a cryogenic freezer for long-term safe-keeping and periodic retrieval. Another researcher in the lab noticed the yeast and suggested we approach some of the local breweries to see if we could trade the yeast we grew for beer. The breweries were excited about potentially having a local supplier for yeast instead of importing it into Canada. We also worked with some local brewers to test and share Ontario wild yeasts. A few of these brewers mentioned we could start a business instead of offering our yeast in exchange for beer.

In 2015, we founded Escarpment Laboratories in Guelph to supply liquid yeast cultures to craft and home brewers. Now, we have a core list of about 30 yeasts or blends that we sell — each of which has its own flavour and chemistry. Our frozen collection has about 1,500 strains of yeast and other microbes.

Part of what fuels me is that I get to participate in research all the time. We do research internally for our product development and we work with academics at several institutions, including the University of Guelph and the University of Waterloo. We focus on understanding the natural diversity in flavours and functions of beer yeasts.

We often conduct experiments in which we put up to 50 yeast strains in the same environment and see which aroma and flavour traits are expressed. We’re also sequencing the genomes of these yeast strains to understand which genetic traits might underlie flavour production or properties such as alcohol tolerance and aroma production. Once we have that fundamental knowledge, we can start getting creative about customizing, hybridizing and modifying yeast strains.

Being a scientist prepares people for life in business, especially entrepreneurship, because science and business both involve experimentation and failure. You have to think in an agile manner, change plans on the fly and be creative. As a scientist, you learn how to deal with failure because sometimes 80% of your experiments don’t work.

J. Nikol Jackson-Beckham is a communication studies scholar, founder of Crafted for All and executive director of Craft x EDU in Richmond, Virginia.

I got into craft beer in the late 1990s, when I was an undergraduate at Virginia Polytechnic Institute and State University in Blacksburg. I started making it for personal consumption during a master’s programme in communication studies at San Diego State University in California. The craft-beer scene was massive in that area. During my PhD, I worked as a manager at several stores that sold supplies for home-brewing. I kept thinking, if I’m this into beer and I’m going to graduate school, why don’t I allow these two worlds to overlap?

My PhD dissertation was about beer, how its value was formed and manipulated in the US brewing industry from prohibition in the 1920s onwards. Although I enjoyed my PhD at the University of North Carolina at Chapel Hill, I kept thinking about equity and inclusion in the beer world. I’ve always been curious about the ethnic and gender disparities in the industry in terms of who drinks craft beer and who makes craft beer.

According to a survey conducted by the Brewers Association (BA), craft breweries in the United States are overwhelmingly owned by white people — people of colour own just a few per cent. There’s also not much ethnic or gender diversity among brewers. Women and people of colour tend to be in front-of-house jobs such as bartending and serving. Even though that’s not what my dissertation was about, I still wanted an outlet to explore those questions, so I started blogging and making visual art on my personal website.

After several years of working full-time in academia, a friend informed me that the BA was looking for a diversity ambassador. It was a part-time, contract position to conduct industry research, write educational materials, give seminars and work with the diversity committee to create programmes, including a Diversity and Inclusion Events Grant programme and a mentorship programme for under-represented people who want to get involved in the beer industry. After I became the BA’s first diversity ambassador in April 2018, breweries started asking me about individual consultations. A few months later, I launched Crafted For All, a platform for my consulting work with the BA, individual breweries and other brewing associations.

In mid-2019, I left Randolph College in Lynchburg, Virginia, where I was a professor of communication studies. In September, I started the non-profit organization Craft  EDU in Richmond, Virginia. It champions inclusion, equity and justice in the craft-brewing community through education and professional development. We have a few core programmes, including opportunity fairs at which the craft-brewing industry is introduced to people from under-represented communities who are seeking employment.

When people ask me what it’s like to no longer be an academic, I always say I’m definitely an academic, I just left the academy. A tenure-track job has three conventional roles: teaching, research and service. I teach through giving keynote talks and seminars. I do research by collecting data for the BA and leading data-driven projects and surveys as a consultant. And I do service as an executive director of a non-profit organization. All the research skills and analyses are still there, but when people look at my work now, they make decisions and implement recommendations in their workplaces.

Andrew Strang is a physicist and founder of Bread By Bike in London, UK.

I never really had a career plan, but knew that doing a PhD in physics at Imperial College London would leave a lot of doors open to me and I enjoyed doing research in interference optics.

I got very interested in making bread during my PhD and started selling it to friends and delivering it by bike. Towards the end of my programme, I started looking into careers in physics as well as bakery businesses in London. Those bakeries inspired me to start my own.

In 2017, I opened the Bread By Bike bakery in London with a few friends. We launched the business on a shoestring, with a small campaign on the crowdfunding platform Kickstarter and without borrowing money from a bank. It was a real do-it-yourself project and the learning curve was steep. Now, there are 21 people working at Bread By Bike and we’ve upgraded to an electric bike so we can carry about 80 kilograms of bread on deliveries to restaurants, cafes and bars. We decided to offer a home delivery service when people went into lockdown in London in March. A friend of mine wrote software to manage orders and delivery routes. We’ve been super busy and will probably stick with home deliveries after the coronavirus situation eases. My job has evolved from baking, delivering and cleaning into a managerial role.

Although the direct skills I was using in the lab are not much use for running a bakery, some of the skills I developed doing scientific research are useful in bread production. Bread is an amazing thing. There’s magic in every step of the process. Classic sourdough is just flour, water and salt, fermented without commercial yeast. But there are so many ways that making naturally fermented breads can go wrong, which is what’s so addictive about it.

Even though I bake the same breads every day, they react completely differently because microbial activity and some of the chemistry depends on the temperature and season. If you made sourdough in the lab, you’d be able to control those parameters and have a very consistent product, but we don’t have that. To produce a consistent product, I need to balance a scientific approach of trying to understand why things are happening and an intuitive understanding of how a dough is going to behave.

The key thing for me was the energy of a bakery — the activities, the sounds, the heat, the products coming out of the oven and chucked onto the rack. It’s extremely dynamic. I was inspired to create something like that for myself, and although my door to an academic career in physics has probably closed, it’s been a great journey making the bakery happen.