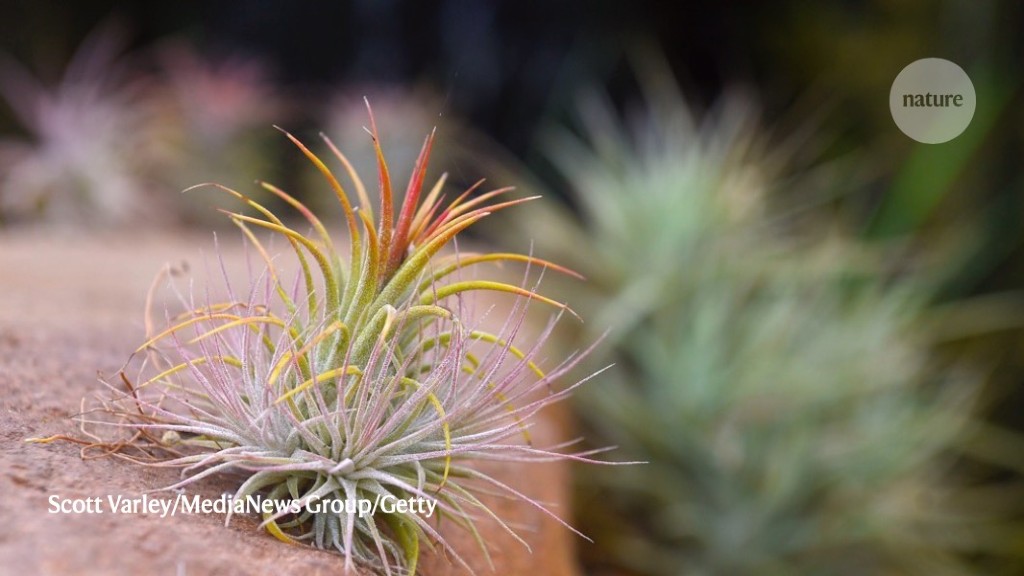 Inspired by ‘air plants’ that need no soil, a squishy material harvests water from the air at night and releases the moisture when warmed by the Sun.

Air plants, in the genus Tillandsia, absorb water vapour with their leaves, allowing them to live on tree trunks or inside glass bowls. To mimic Tillandsia foliage, Peng Xiao, Tao Chen and their colleagues at Ningbo Institute of Materials Technology and Engineering in China made a gel composed of a porous, water-attracting scaffold filled with a water-absorbing liquid. The gel also included long-chained molecules that can convert light energy to heat.

Water vapour in contact with the gel’s surface is first captured by the porous scaffold, then rapidly transported to the gel’s interior via the liquid. After a piece of gel spent the night on their building’s roof, the researchers transferred it into a closed container and set it under the Sun. The gel’s long-chained molecules generated heat and drove out the absorbed water, which condensed on the container’s walls.

As it took in water, the gel swelled to almost seven times its original volume without rupturing.

Trump agrees to deal in which TikTok will partner with Oracle and Walmart
Nikola shares open at lowest price since its public debut after company founder Trevor Milton resigns
This Week’s Equal Night, Equal Light: What Is Equinox, How Does It Work And Why Does It Matter To You?
Disused land and buildings are getting a new lease of life as regeneration gains traction
For the first time, an ‘ultra-hot Neptune’ has been discovered orbiting a Sun-like star