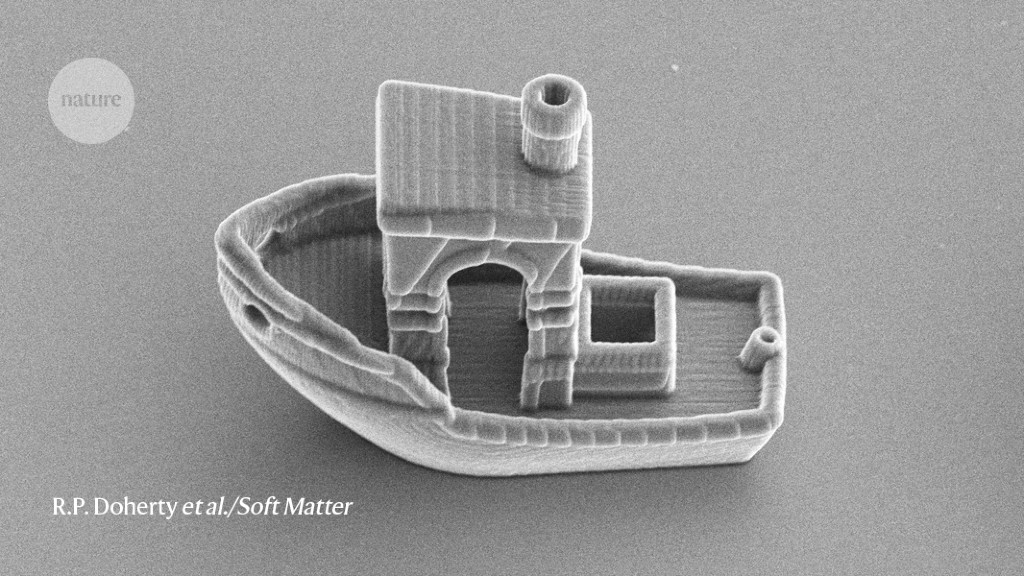 This boat-shaped particle measures just 30 micrometres in length, but is fully equipped with a cabin, chimney and flag post, and is able to propel itself through a solution of 10% hydrogen peroxide. It was 3D printed using a technique called two-photon polymerization, and was then coated with a mixture of platinum and palladium, which catalyses the breakdown of the hydrogen peroxide. This reaction produces bubbles of gas that propel the particle along. Daniela Kraft’s team at Leiden University in the Netherlands made many swimming shapes using the same method — including spheres, spirals, triangles and even a miniature starship (R. P. Doherty et al. Soft Matter https://doi.org/fjrf; 2020). They hope that this work will help them to study the effect of shape in microorganisms that swim, such as bacteria.

AI sums up TL;DR research in a sentence

The creators of a scientific search engine have unveiled software that automatically generates one-sentence summaries of research papers, which they say could help scientists to skim-read papers faster.

The free tool, called TLDR (the common Internet acronym for ‘Too long; didn’t read’), was activated this week for search results at Semantic Scholar, a search engine created by the non-profit Allen Institute for Artificial Intelligence (AI2) in Seattle, Washington. For the moment, TLDR generates sentences only for the ten million computer-science papers covered by Semantic Scholar, but the researchers say that papers from other disciplines should be getting summaries in the next month or so, once the software has been fine-tuned.

A preprint describing the tool was first published on the arXiv preprint server in April (I. Cachola et al. Preprint at https://arxiv.org/abs/2004.15011; 2020), and was accepted for publication after peer review by a natural-language-processing conference taking place this month. The authors have made their code freely available, along with a working demo website where anyone can try the tool (see go.nature.com/3psfs3t).

The immune system’s memory of the new coronavirus lingers for at least six months in most people.

Sporadic accounts of coronavirus reinfection and reports of rapidly declining antibody levels have raised concerns that immunity to SARS-CoV-2 could dwindle within weeks of recovery from infection. Shane Crotty at the La Jolla Institute for Immunology in California and his colleagues analysed markers of the immune response in blood samples from 185 people who had a range of COVID-19 symptoms; 41 study participants were followed for at least 6 months (J. M. Dan et al. Preprint at bioRxiv https://doi.org/ghkc5k; 2020).

The team found that participants’ immune responses varied widely. But several components of immune memory for SARS-CoV-2 tended to persist for at least 6 months. Among the persistent immune defenders were memory B cells (pictured), which jump-start antibody production when a pathogen is re-encountered, and two important classes of T cell: memory CD4+ and memory CD8+ T cells. The results have not yet been peer reviewed.

How India Could Strike A Blow For The Global Scientific Community
Apple removes Parler from App Store in wake of U.S. Capitol riot
GM’s electric delivery foray, plus other mobility trends headlining CES
Yes, The James Webb Space Telescope Really Should Launch In 2021
The mysterious extinction of the dire wolf