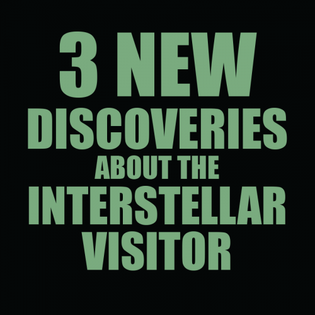 There have been a few new discoveries concerning the interstellar object Oumuamua so I thought I would write a brief update. Here are three new things that scientists have discovered:

1, It is tumbling through space

The variations in brightness that were observed through the world’s telescopes have given scientists an idea of what the object looks like. Not only were they able to determine that the object was around 10 times as long as it is wide they were also able to determine that it is tumbling through space. Which means that the object is rotating on more than one axis. It’s not spiraling like a well-thrown football but it is instead rotating end over end and sideways, like a very poorly thrown football. It seems to complete a rotation every 7.3 hours.

An international team of scientists has been looking at the data that was collected when Oumuamua passed by our Sun. They have recently discovered that the object gained some speed that was unrelated to the gravity of the Sun or any of the planets. This change in speed is consistent with the behavior of a comet. One of the only things that can change the speed of an object like this is gas being expelled from its surface.

The problem is no outgassing was detected. We just didn’t see it happen. The images of Oumuamua all show a clear bright dot with no tale or emission cloud. This means that the gas must have been a small amount or a type of gas that would have been hard to see. This could also mean that something else changed the speed of the object.

3, Where is it and where did it come from?

The interstellar visitor is headed away from us and is now as far away as Jupiter. It’s traveling at about 70,000 mph. After analyzing the path it took past the Sun scientists are now ready to say that its path was hyperbolic and not elliptical. Meaning that Oumuamua will not ever return to our solar system. This also means that scientists are certain that the object did not originate in our solar system and is truly an interstellar object.

The infographic below has more details.

The study of the interstellar visitor is ongoing. There is a lot of data to look at and scientist will continue to learn more and more. To keep up with these discoveries follow me here on Forbes and visit our friends at NASA.