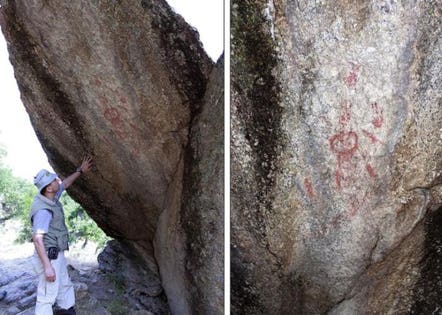 Rock-shelter near Çakallar volcano in modern Turkey showing rock art that may depict the erupting volcano.

Research, published in the journal Quaternary Science Reviews, aimed to determine the age of prehistoric footprints found in the ash layer produced by the Çakallar volcano eruption, which took place in the Kula UNESCO Geopark, in Manisa Province, Turkey. The “Kula footprints”, preserved in fine-grained volcanic ash, were discovered in the 1960s during construction work. Previous studies suggested the footprints were 247,000-years-old and belonged to Homo neanderthalensis. However, using modern radiometric dating methods, a research team from Istanbul Technical University, Hacettepe University, Celal Bayar University and Curtin University, Perth, was able to precisely date the volcanic ash into the Bronze Age, 4,700 years ago. This new date suggests that the footprints were left behind by modern humans and that they witnessed the final stages of the volcanic eruption from a safe distance. The footprints were left in a wet ash layer. As the volcanic eruption continued, the footprints were buried by a protective ash layer and preserved to this day. A red ochre painting, discovered in 2008 in a rock-shelter located near the volcano, may even show the moment of the prehistoric eruption. The rock-shelter is a mere 1.2 miles from the fossil footprints, about a 20-minute walk away. The art, known by the locals as the Kanlitas rock painting, shows a combination of abstract symbols and handmarks. According to the research, the abstract symbols, lines and a circle, may show the volcanic edifice of Çakallar with its crater. The handprints above the volcano may symbolize a cloud of ash and the glowing volcanic ejecta, as often seen during a volcanic eruption. An intriguing interpretation, but like sometimes in modern art, we may never know what exactly the ancient artist wanted to show us.

How Do They Make Baklava?
Cupcakes | How It’s Made
After the age of contagion, what’s the ‘new normal’?
Gamma rays and gravitational lensing provide hints of dark matter – Physics World
Wheat in Whitehorse: how climate change helps feed Canada’s remote regions