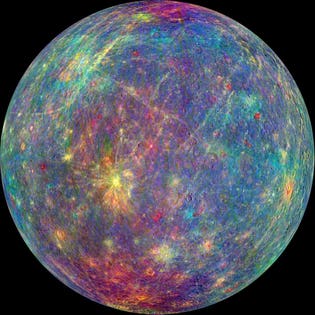 Mercury, the blazingly hot little world at the inner edge of our solar system, largely remains the enigma it has always been. That’s mostly because it’s 88-day solar orbit makes it so tough to reach.

Only two spacecraft have flown by or orbited Mercury. A third — the European Space Agency’s (ESA) and the Japan Aerospace Exploration Agency’s (JAXA) Bepi-Colombo orbital mission due for launch this week, should arrive at the planet in late 2025.

To date, the details of Mercury’s bombardment history, surface geology, surface composition, and interior structure still remain a mystery. We know much more about Venus and Mars than Mercury .

— The mystery of water ice at its poles.

Although Mercury is the closest planet to the Sun, there are areas inside craters at the North and South pole that never see sunlight and are cold enough for ice to be stable.

We think that a lot of these permanently shadowed regions do indeed contain deposits of water ice, Michael Sori, a planetary scientist at the University of Arizona, told me. But he says the mystery is where its ice originated?

Some planetary scientists think Mercury’s ice may have come from a geologically-recent cometary impact.

“The comet hypothesis is certainly viable, but it’s not confirmed,” said Sori.

— The mystery of its hollows.

“Hollows are seen only on Mercury and commonly display high surface reflectance and often bright halos,” Sean Solomon, a geophysicist at Columbia University and MESSENGER’s principal investigator, told me.

Solomon says it’s thought that hollow formation scenarios may be related to geologically-recent loss of volatile compounds at Mercury’s surface. Such mechanisms are thought to include space weathering, outgassing and sublimation (in which a substance passes directly from a solid to a gas without a liquid phase).

NASA’s MESSENGER orbital spacecraft permitted measurements of the depths of hundreds of Mercury’s individual hollows. It revealed they had an average depth of some 24 meters. However, even the highest-resolution images of Mercury’s hollows says Solomon, revealed no impact craters, implying that hollows are very young.

— The mystery of its ancient magnetic field.

Although the planet’s magnetic field is largely shaped like that of Earth’s, it is not centered on the

planet’s center, but rather a few hundred kilometers north of the equator, Larry Nittler, a cosmochemist at the Carnegie Institution of Washington, told me.

This situation is unique in the solar system and is not well understood, says Margot.

Ideas about why it has such an odd alignment include Mercury’s distinctive 3:2 spin-orbit resonance, in which the planet spins three times on its axis for every two revolutions around the Sun.

Although Mercury is only a little more than a third the size of Earth, its present-day field is only about one percent that of Earth’s own surface field, as I noted here earlier.

In fact, the planet’s magnetic field was discovered by NASA’s Mariner 10 spacecraft which flew by the planet in the 1970s. But Solomon says the geometry of the field was not known until MESSENGER made magnetic field observations from orbit.

— The mystery of its surface composition.

MESSENGER found that Mercury’s surface contains much higher abundances of volatile elements such as sulfur, sodium, potassium, and chlorine than predicted.

The planet’s surface composition is puzzling says Solomon, because most hypotheses of Mercury’s formation dictates that there should have been a high-temperature phase either during or following formation that would have vaporized and driven off such materials.

But it’s thought that Mercury formed under more oxygen-poor conditions than the other rocky planets, says Nittler. That’s especially puzzling, he says, because as he notes most of the

— The mystery of its formation and anomalous large iron core.

Mercury’s high bulk density has been interpreted as indicating a higher ratio of metal (mostly iron) to silicate than for the other inner planets, says Solomon.

As a result, Solomon says it’s likely that Mercury accreted from solid material formed in a different part of the solar nebula than the source materials for the other inner planets. Thus, he says, it could include substantial silicon (as well as sulfur) alloyed with the iron.

The radius of the core extends to an astounding 83% of the planetary radius, a situation that is unique in the solar system, says Margot. However, the origin of Mercury’s anomalously large metal fraction, which is required for such a large core, remains a mystery.