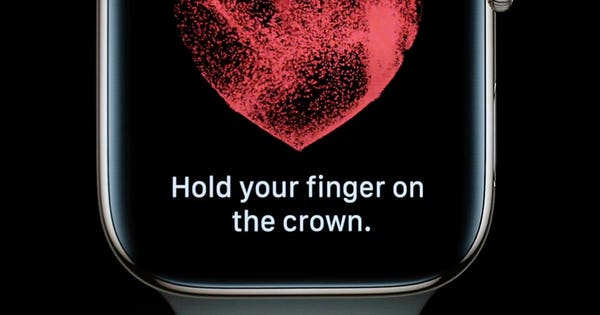 On September 12, 2018, Apple’s COO Jeff William announced that the Apple Watch Series 4 would contain an FDA-cleared ECG sensor. This immediately triggered a mixed-bag reaction in the digital health community, from healthy skepticism to an outcry about its effect on the already overwhelmed cardiac care ecosystem.

Apple announced three separate but related features, in the September launch. First, a heart rate monitoring service that will alert patients when their resting heart rate systematically falls below a certain threshold. Second, an FDA approved algorithm that can predict atrial fibrillation from heart rate obtained from its optical sensor. Third, an FDA approved single lead ECG that can more accurately compute heart rate and predict atrial fibrillation (this feature and the EKG app will be available later in 2018).

These feature sets are of particular interest to medical signal processing startups who can now develop, test and deliver their own health monitoring applications, using the Apple Watch Series 4 as a wearable medical device platform. Companies like Cardiogram and Qardio are already building personal healthcare assistants, by collecting heart rate and movement data from the Apple Watch.

Here are 5 Reasons why a consumer should be excited about the Apple Watch 4’s ECG sensor,

1. Can detect Atrial Fibrillation, a leading cause of stroke

Arterial fibrillation (Afib) is the leading cause of stroke and is responsible for approximately 130,000 deaths and 750,000 hospitalizations in the US every year. Since most patients don’t experience symptoms, so AFib often goes undiagnosed. Both the optical and ECG sensors embedded in the Apple Watch can individually detect AFib. The clinical validation of the optical sensor is called the Apple Heart Study and was done in collaboration with Stanford Medicine, which started in September 2017 and will end in January 2019.

Since AFib is only one of the many types of arrhythmias, there is a growing concern among cardiologist that potential costs in terms of false alerts could outweigh the proposed benefits in terms of early detection. However, cardiologists must remember that Afib detection is only the first step for this wearable device. Future algorithmic developments can also cover a majority of arrhythmias including identifying extra beats, supraventricular tachycardias, ventricular arrhythmias, and bradyarrhythmias.

Heart rate variability (HRV) measures the variation in the time interval between heartbeats. HRV is related to emotional arousal and can be used to predict stress. There is a strong evidence that the autonomic nervous system regulates HRV (the polyvagal theory).

Raw signals from both the optical and the ECG sensor can be used to detect HRV. Historically HRV has been poorly standardized, which make designing, implementing and comparing HRV studies difficult. However, a standard piece of hardware like Apple Watch 4 could be the first stepping stone to standardize HRV measurements and use this for predicting stress and fatigue.

The optical sensor in the Apple Watch 4 continuously measures heart rate. The ECG sensor could be used intermediately by the user to measure heart rate more accurately. To get a heart rate form the ECG sensor the user has to physically touch the Digital Crown for a 30-second interval.

By combining data from both the optical and ECG sensor the device will be able to predict more accurate heart rate continuously. This well-known technique in biomedical engineering is called sensor fusion.

4. Can potentially be used as a virtual coach

The Apple Watch 4 has accelerometers and gyroscopes, that can be used to track and classify human movements like sleeping, sitting, walking, running, swimming, rowing, pushups. This information could be coupled with biometric data to design a virtual coach.

For example by automatically tracking how the user’s heart rate changes with their running speed, the Apple Watch 4 can detect the optimal running speed where the user can build endurance. The haptic feedback can then be used to instruct users to run at that particular speed, and hence help them build endurance in the shortest amount of time.

5. Can potentially be used to measure stress ECG, a predictor of heart health

Stress ECG is used to quantify the overall heart health. Stress ECG measures the change is heart rate when the user is subjected to controlled exhaustion while running on the treadmill, or pedaling a stationary exercise bicycle.

Since Apple Watch 4 can keep users running at a particular speed, as well as measure their heart rate, a modified Bruce Protocol can be designed to qualitatively predict heart health. The advantage will be that the users can regularly do such Stress ECG tests at home, instead of enrolling in heart clinics.

How Your Brain Makes Decisions Impacts How It Evaluates (Mis)Information
IQ test scores are getting higher, but are humans actually getting smarter?
Scientists discover new auroral phenomenon hidden in 19-year-old video footage
Sharks Use Earth’s Magnetic Fields To Navigate
China’s push to cut carbon emissions boosts risks for part of the country