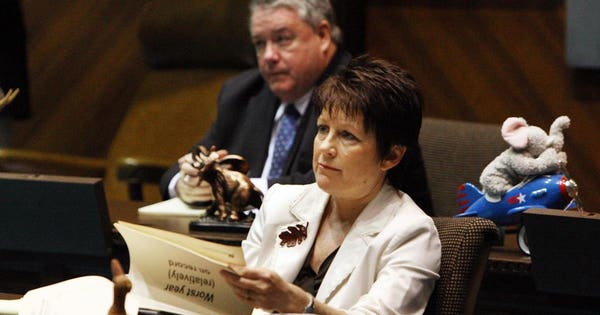 Raising Arizona is a fictional movie. Raising Arizona vaccination rates is something that’s needed for real. So what then do you think the Arizona state legislature should do?

Before you answer that here’s a reminder of what is occurring outside Arizona. The case count for the ongoing Washington measles outbreak has now reached 65. The state of Washington legislature is considering two new bills that would pull back the option of parents from opting out of vaccination for “philosophical” reasons. In Madagascar since last September, over 900 people have died from a measles outbreak that emerged due to low measles vaccination rates.

With all of that under consideration, here is the question again: what do you think the Arizona state legislature should do? How about pass three bills that would expand vaccine exemption categories and make it easier to get a vaccine exemption by remove the current requirement that parents sign a state health department form, as reported by Stephanie Innes for the Arizona Republic?

Huh? The Grand Canyon may not be the only big gap in Arizona. Pushing these three bills through would seem like a huge gap between what is being done and what is truly needed. The state of Washington had to declare a statewide emergency and has already spent over a million dollars of taxpayer money dealing with the measles outbreak. All scientific evidence suggests that lower vaccination rates in Clark County, Washington, led to the outbreak. Therefore, the focus in Washington has been trying to increase vaccination rates.

You would think that other states, like Arizona, would learn from the Washington example, would look for ways to increase vaccination rates. After all, nothing else, no supplement, no special diet, no homeopathic remedy, and no chiropractic maneuver, comes remotely close to the vaccine in preventing the measles and measles outbreaks. You can look far, wide, and on Facebook and you won’t find anything else to replace the vaccine. That’s apparently what one mother was doing when she asked the “Natural Health Anti-Vaxx Community” Facebook group the question shown on the following Tweet:

On top of all this, Arizona may have the lowest measles-mumps-rubella (MMR) vaccination rates in the country at 84.1%, according to a Centers for Disease Control and Prevention (CDC) survey as Claire Cleveland and Jessi Schultz reported for the Cronkite News Service. Such a rate would be well below the 95% critical immunization threshold needed to prevent the measles virus from more readily spreading in a population, as I described previously for Forbes.

Yet, despite all of this, Nancy K. Barto, a Republican member of the Arizona House of Representatives has sponsored House Bills 2470, 2471, and 2472 that could end up further lowering vaccination rates in Arizona. Paul Boyer, a Republican member of the Arizona State Senate, co-sponsored all three bills, which on Thursday, passed the Arizona House Health and Human Services Committee via a 5 to 4 vote. All five committee members voting for the bills were Republican and all four voting against were Democrats. If voting in the general legislature (where the Republicans hold the majority in both the Senate and the House) follows similar party lines, the trio of bills have a good chance of passing.

House Bill 2470 essentially would make it easier to get a vaccine exemption by changing the current language of the relevant Arizona law. This certainly won’t help increase vaccination rates and could lower them, making the low vaccine coverage problem and the risk of disease outbreaks even worse. This is also exactly opposite to what is being considered in the Washington state legislature as described in this KING 5 news segment:

Speaking of worsening problems. Doctors are already overloaded with paperwork, spending, based on a study I covered for Forbes, around two-thirds of their precious time shuffling and filling out forms. Well, doctors in Arizona, get ready for potentially more paperwork. House Bill 2471 would require doctors and other health professionals to provide more information about vaccines, beyond what they already provide, before administering a vaccine. Legitimate scientific and health organizations like the National Library of Medicine, the National Institutes of Health, the Food and Drug Administration, the CDC, and the World Health Organization, already provide a plethora of information on vaccine, and there is something called the Internet that allows you to access this information.  Plus, you can always ask your doctor or pharmacist for such information if you so desire. Requiring your doctor to provide additional information as a routine will create more paperwork and potentially more litter.

Moreover, why make this requirement for vaccination, an intervention that has abundance of scientific evidence supporting its efficacy and safety, and not other health interventions? For example, a New England Journal of Medicine study estimated that around 23,000 emergency departments occur in the U.S. every year due to adverse events related to dietary supplements. As I have written previously for Forbes, studies have found unapproved ingredients in a number of different supplements.

House Bill 2472 also has the potential of adding more problems. This bill wants to give patients the option of getting an antibody titer test to check for immunity before a vaccine is administered. The trouble is antibody tests certainly are not perfect measures of immunity. They only test what may be in your blood that specific day and not in the future. False positives are possible, especially for diseases that are rare, because others have been vaccinated. For example, other viruses can lead to a positive IgM test for rubella. False negatives are also possible. Your test can be negative, even if you are protected. Then, there’s the cost of these additional tests.

If vaccination rates remain where they are at based on the CDC survey or worse get even lower, Arizona could very well be a sequel of what’s currently occurring in Washington. And as is often is the case with movies, the sequel could be worse.