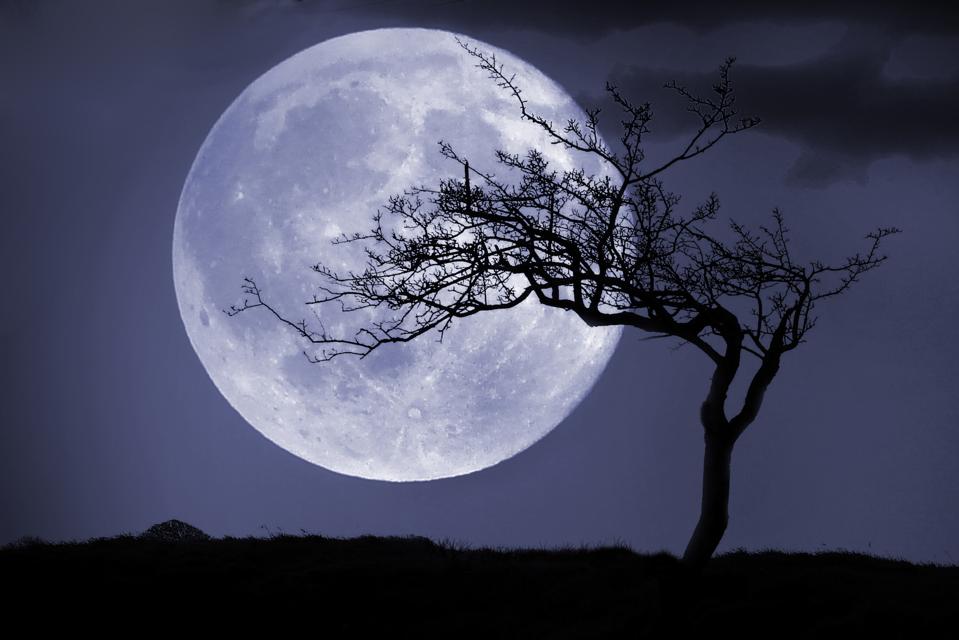 Each Monday I pick out the northern hemisphere’s celestial highlights (mid-northern latitudes) for the week ahead, but be sure to check my main feed for more in-depth articles on stargazing, astronomy, eclipses and more.

MORE FROM FORBESStop Looking For An ‘Earth 2.0,’ Say Scientists As They Detect An Even Better ‘Superhabitable’ WorldBy Jamie Carter

What To Watch For In The Night Sky This Week: October 26 through November 1, 2020

This week will be dominated by a “Blue Moon,” the second full Moon of the month, which rises at dusk on Saturday’s Halloween. It will be the first full Moon to do that since 1944.

However, before we get treated to a “Halloween Hunter’s Blue Moon,” our satellite will glide close to the bright red planet Mars. It’s still so bright because it was recently at opposition, the closest to Earth that it gets.

The weekend also sees the opposition of Uranus, the seventh planet from the Sun, which will just about be a naked eye sight for those lucky enough to be under spooky dark skies this Halloween.

There’s also a new comet in town! See below for details.

Below is a star-chart to help you find Mars and Uranus, and everything else you need to know about stargazing this week.

A bright waxing Moon will tonight appear to be just 3° from the planet Mars in the eastern sky right after dark. In clear skies it will make a wonderful sight. Tonight the Moon is also at apogee, the furthest it gets from Earth this month.

Look to the lower left of the duo to see the Pleiades star cluster sparkling as it rises above the eastern horizon. The Pleiades will be followed into the night sky by the constellation of Taurus, which later tonight may also deliver to your eyes some fleeting celestial sights …

It’s not regarded as one of the year’s major meteor showers, but it’s worth knowing about the Southern Taurids. Producing between five and 10 “shooting stars” per hour, the Southern Taurids are famous for the occasional bright “fireballs” they produce, which can be quite a sight. Appearing to originate from the constellation of Taurus, they’re the result of debris and dust left in Earth’s orbital path around the Sun by Comet 2P Encke.

The shower runs from September 10 to November 20, but peaks tonight. Be outside after midnight in the early hours of Friday. That bright Moon will get in the way, so don’t make a big effort to travel to a dark sky for this one.

My advice is to take some time to stargaze late tonight and you might see a Southern Taurid or two.

As the second full Moon of the month after the “Harvest Moon” on October 1, 2020, tonight’s “Hunter’s Moon” on Halloween will also be known as a “Blue Moon” simply because it will be the second in one calendar month.

It will be best seen in the east at moonrise where you are. Only at that time (and for about 20 minutes after) will you see its muted orange hues as it appears on, and lifts above, your eastern horizon.

Planet of the week: Uranus at opposition

Saturday also sees the distant planet Uranus reach opposition. With Earth in between the Sun and Uranus, the blue-green planet will be the closest it ever gets to us, though tonight that’s still almost 19 times the Sun-Earth distance.

Shining at a magnitude of +5.7, the seventh planet from the Sun is right on the cusp of naked-eye visibility. You can try to look at Uranus anytime this month and next, though tonight it rises in the east at sunset and sets in the west at sunrise, so it’s a good choice.

It can be found—with keen eyes under a dark sky or, more likely, in a pair of binoculars or a small telescope—close to the constellation of Cetus. Since it takes 84 years to orbit the Sun, it won’t budge much in the coming weeks. It will look a blue-green color.

It’s not going to be a naked-eye object, but if you have a pair of binoculars then you’ll be able to see Comet P1 NEOWISE—also known as Comet C/2020 P1 NEOWISE—during late October and early November. According to Universe Today you need to look low to the east before dawn.

Flame thrower
We’re About to Witness a Super-Rare Planetary Alignment Not Seen in 800 Years
AAC Clyde Space to develop cubesats to offer array of services
Space surveillance technologies a top need for U.S. military
Goldman questions the future and purpose of OPEC+ ahead of a critical meeting