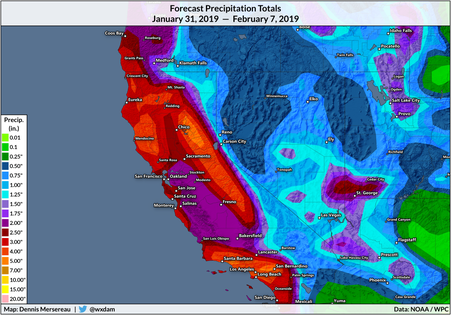 Forecasters expect a strong low-pressure system to develop in the eastern Pacific Ocean on Friday and move toward northern and central California through the weekend. The storm system will likely bring heavy rain and gusty winds to much of the state over the next couple of days, leading to the potential for flash flooding and scattered wind damage.

An upper-level trough moving across the northeastern Pacific Ocean this afternoon will lead to the development of a low-pressure system at the surface on Friday. The storm will develop fairly close to the coast and quickly strengthen as it moves closer to land.

Heavy rain at lower elevations, and heavy snow at higher elevations, will begin to overspread California on Friday evening and continue through Monday. The latest forecast from the Weather Prediction Center shows a couple of inches of rain across coastal areas and higher elevations, with slightly less expected in rain shadows. Some of the rain in the forecast for southern California is occurring today as a result of an unrelated batch of thunderstorms moving across the area.

The greatest potential for flash flooding (and mudslides) will exist in and near higher elevations, especially across terrain that was burned in recent wildfires. Burn scars are particularly vulnerable to mudslides during heavy rain events. Flash flooding in urban areas is also possible if the storm sewers on some streets are clogged or the system struggles to keep up with the heavy rain.

The deep moisture moving into the region will allow for bountiful Sierra snowfall, with the ridges seeing multiple feet of fresh snow by next week. The WPC’s 72-hour snowfall forecast shows more than three feet of snow along the ridges; the heavy snow combined with gusty winds could lead to blizzard conditions on Sunday night around Lake Tahoe.

The risk for gusty winds is nothing to sneeze at. Models continue to show very strong winds not too far above the surface. It won’t take much of a heavy downpour or thunderstorm to help mix those strong winds down to the surface. National Weather Service offices across central California have issued high wind watches for many regions—including San Francisco proper—in anticipation of wind gusts of 50 to 60 MPH this weekend, with higher gusts at higher elevations. The combination of strong winds and wet ground will increase the risk for fallen trees and power outages.

Electronic Health Records: Here Is How Much Time Doctors Are Spending With Them
ESA seeks new cooperative agreement with EU
Can Better Goggles Improve Your Skiing?
What’s For Dinner? For Hammerhead Sharks, It’s Family!
Oldest stuff on Earth found inside meteorite that hit Australia