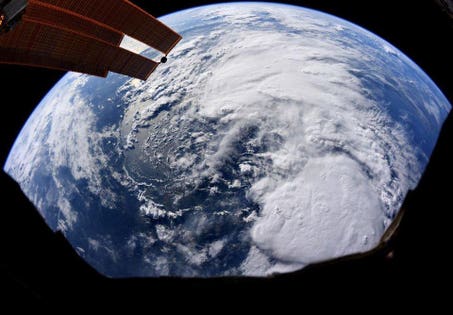 Hurricane Barry is now a tropical depression at the time of writing. It still has the potential to produce a few inches of rainfall in parts of the Mississippi River valley. Barry was one of the oddest hurricanes that I can recall. Speaking with my meteorologist and atmospheric sciences professor hat on, the storm emerged from a upper level vortex that wondered from the U.S. mainland to the Gulf of Mexico. This “spin” in the atmosphere produced Hurricane Barry. However, this is where the story gets interesting. Depending on how you look at the forecast, very different stories emerge. Was it a success or bust?

Tropical Storm Barry on July 11th as seen from the International Space Station. The asymmetric nature of the thunderstorms around a broad center is seen.

Tropical Storm Barry on July 11th as seen from the International Space Station. The asymmetric nature of the thunderstorms around a broad center is seen.

Many meteorologists, including me, remarked about how the computer models persistently resolved the sequence of events roughly 8 to 10 days ahead of time. I first wrote in Forbes nine days ago about the potential for a “mesoscale convective vortex” to spawn a tropical system. Some meteorologists were talking about it even earlier. The European model, which was consistently bullish on development, initially had a stronger system evolving, but tropical meteorologist Phillips Papin tweeted on July 11th, “First, it appears the GFS (American model) handled Barry’s initial structure better, with a low-level circulation removed from the mid-level vortex.” Barry never developed into a classic looking hurricane or tropical storm because it was constantly battling wind shear (strong wind speeds or directional change in the atmosphere), dry air from an area of upper level high pressure called a ridge, and a very jargony meteorological processes called a potential vorticity (PV) streamer. Papin is the expert on PV streamers and has a pretty solid tutorial on them at this link.

Spaghetti plots illustrate the track uncertainty with the storm.

Earlier model forecasts also had Barry drifting southward and westward over the Gulf of Mexico. This would have placed Barry over warmer waters longer, but the storm ended up on the eastward side of the forecast model tracks. Stepping back from the details, many meteorologists were impressed with how the models “saw” this situation unfolding. As National Hurricane Center meteorologist Eric Blake tweeted on July 6th

Well I was walking in Memphis