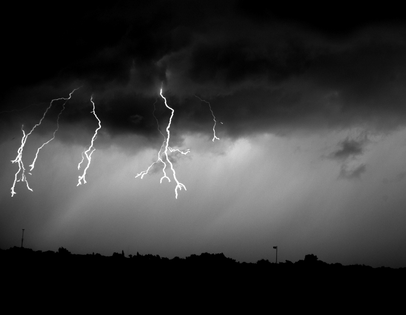 The shocking science news of the week was about black holes, but a new finding about lightning also got my attention. Researchers at the University of New Hampshire have found a unique set of events that happens just before a lightning flash. While the finding itself is interesting, it also challenges current thinking about how air transports electricity in a cloud. What is exactly is going on?

The lightning seen here starts out deep inside the cloud where scientists continue to study its first moments. In their study, UNH researchers observed a possible new way that lightning forms called “fast negative breakdown.”

Research on lightning has been conducted for over 250 years, but a definitive explanation of how it forms has remained elusive. This study  used a network of ground-based antennas at Kennedy Space Center to detect radio waves coming from deep inside lightning-producing storm clouds. The research team, which also included collaborators from the New Mexico Institute of Mining and Technology, conducted their study in an ideal geographic area. Central Florida is a hotbed of lightning activity because of storm development that initiates with sea breeze fronts, outflow boundaries (the leading edge of cold, dense air from other storms), and the interactions among them.

The study was published in the journal Nature Communications. A press release issued by the University of New Hampshire and published at Science Daily states:

Recently, the problem of lightning initiation seemed to be solved with the discovery of “fast positive breakdown” of air, which matched the theory long held by lightning researchers. Fast positive breakdown involves the downward development of a pathway in the cloud, moving from the positive charge at the top of the cloud to the negative charge in the middle of the cloud. The pathway forms at one-fifth the speed of light and can trigger lightning. However, the newly reported observation of fast negative breakdown shows that an upward pathway – going in the opposite direction and just as fast – can be created in a thundercloud, indicating there’s another way to start electricity in the air.

The Climatological Lightning Threat in Florida from 2 pm to 8 pm.

Ningyu Liu is one of the scientists involved in the study. He said, “This is the first time fast negative breakdown has ever been observed, so it’s very exciting.” Another really interesting aspect of the study is that techniques from the world of radio astronomy than were employed in a meteorology study. Intra-cloud discharges known as narrow bipolar events (NBEs) almost always occur at the beginning of a lightning flash or sometimes as an isolated event. Scientists have long believed that this indicates how critical they are in the initiation of electrical discharges in thunderstorms.

According to an article in Phys.org, a Japanese study found that NBEs are found at relatively high altitudes in thunderclouds. The article points out that ”Based on their observations, the authors suggest that there is a critical cloud height—around 15 kilometers (9 miles) altitude—below which negative narrow bipolar discharges will not occur.” This means that they may be useful for studying other aspects of formation, structure, and storm height.

NBEs can be positive or negative discharges. However, the characteristic most relevant to the new study is that NBEs emit the strongest radio frequency radiation from lightning. Such emissions can be detected by radio wave detectors. This study used something called a VHF radio interferometer and a Lightning Mapping Array.

The “So What?” factor from this study is that lightning can be a significant hazard for people, airplanes and our infrastructure. New understanding of how lightning forms might lead to better diagnostic and predictive capabilities.

The next big challenge is getting people not to spell lightning with an “e.”