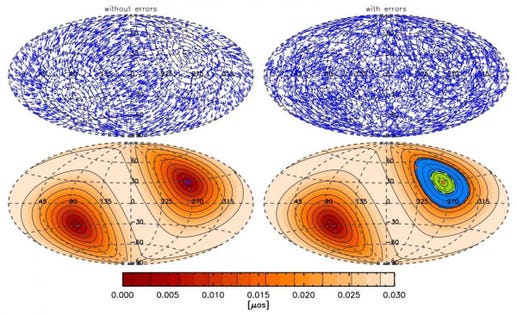 The motion of any object is relative. On Earth we tend to ignore that, because the vast background of the ground gives us a seemingly fixed and absolute frame of reference. Sitting comfortably at our desk, it certainly seems that we are not moving, since our desk, our office, and everything around us seems to likewise be at rest. But of course the Earth spins on its axis, and it orbits the Sun at 30 kilometers per second, and the Sun speeds through the galaxy. We are moving through the cosmos at great speed, even though it doesn’t feel like it. So what about our Milky Way galaxy? Surely it, too, is moving through space. But relative to what? And how can we measure it?

One way is to use the cosmic microwave background (CMB). Just as the Earth provides a large background against which we can measure our personal motion, the CMB provides a cosmic backdrop against which we can measure the motion of the Milky Way. We see the CMB as a faint glow of microwaves coming from all directions. It is caused by the primordial fireball of the big bang that has been cooled over billions of years due to cosmic expansion. Except for small fluctuations, its temperature is very uniform. But since the Milky Way is speeding through space, light from the CMB is blueshifted in the direction of our motion, and redshifted in the direction we’re speeding from. By observing the CMB, we know that the Milky Way and other nearby galaxies are moving at about 630 kilometers per second relative to the cosmic background.

The accuracy of this speed is limited by the overall data of the CMB. This makes it difficult to make more precise measurements, or measure the change of our galaxy’s speed over time. But recently there’s been a proposal for a new way to measure our cosmic speed. The idea is that rather than use the CMB, look instead at the countless distant galaxies. Since each galaxy is a specific source of light, rather than a cosmic background, we can measure our speed relative to it with much greater accuracy. But because an individual galaxy also moves relative to the cosmic background, we can’t just use the data of one galaxy. We’d have to take an average of millions or billions of galaxies we can observe. It would be similar to measuring our speed relative to the Earth by measuring our speed relative to people all over the world. Measuring only a few wouldn’t be very accurate, but if we measured the motion of billions of people it would provide an excellent measure of our speed. And because we would measure galaxies, our result wouldn’t depend upon the assumption that the CMB is uniform in temperature.

At this point the idea is just a proposal. The amount of galactic data we would need is far larger than what we currently have. But when large sky survey telescopes come online, such as the Large Synoptic Survey Telescope or the Square Kilometer Array (both currently being constructed) we could capture enough data to make the idea feasible. If we succeed, we’d not only have a new measure of our galactic motion, we’d have a better understanding of the cosmic microwave background.

Making Progress on Our Artemis Moon Rocket on This Week @NASA – June 11, 2021
GM accelerates electric car investments, announces 2 new battery cell factories in the US
What Are The Hottest Stars In The Universe?
Amphibious fish get smart — by working out on land
The global extinction of languages is threatening a vital type of human knowledge