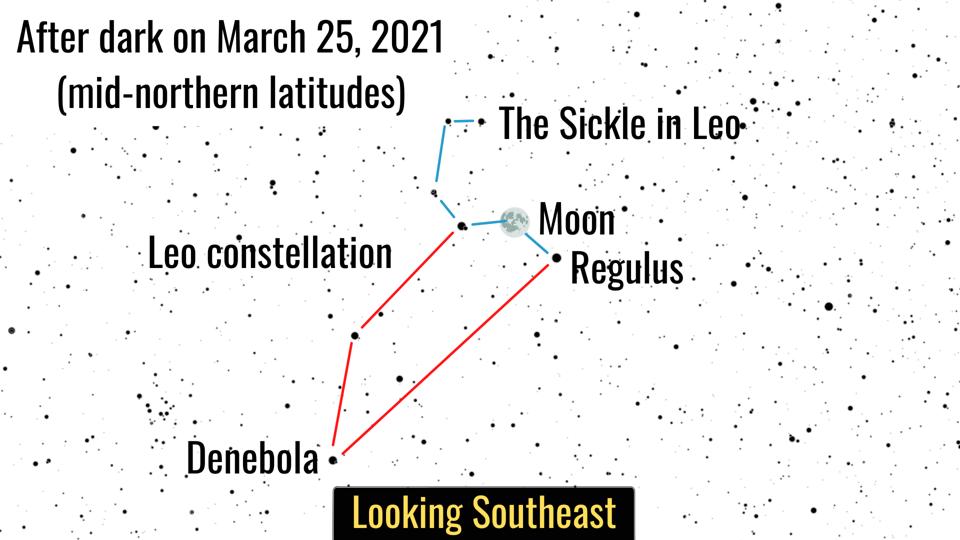 Each Monday I pick out the northern hemisphere’s celestial highlights (mid-northern latitudes) for the week ahead, but be sure to check my main feed for more in-depth articles on stargazing, astronomy, eclipses and more.

This week isn’t the best for stargazing. Why not? Our satellite reached its “first quarter” phase yesterday, which means it was 50% illuminated and already very bright indeed at sunset. As such, it tends to bleach the night skies, a problem that worsens as the week unfolds and virtually ruins Saturday’s annual “Earth Hour” lights-off event, at least as a chance for stargazing.

Fainter stars may be harder to see, but the prize at the end of the week is the fabulous sight of a full moonrise as a “Super Worm Moon” appears in the east at dusk on Sunday.

Get in position to see our satellite appear as a (slightly larger than usual) delicate orangey orb.

Look high to the southeast this week after dark and you’ll see the classic spring-time constellation of Leo, the Lion. It’s dominated by the bright star Denebola at the tip of its tail and Regulus at one of the lion’s front paws.

Regulus (79 light years distant) forms the period in the “Sickle” (backwards “question mark” shape) that makes-up the lion’s head. Look on Thursday to see a 90%-lit waxing Moon about 4° above Regulus.

The annual “lights-out’” event called “Earth Hour” is a symbolic show of support for our planet, but the organisers don’t seem to know about the Moon.

It’s almost full tonight, so the night sky will be bright and appear light-polluted to anyone switching off all of their lights at 8:30 p.m.

Today at 19:48 Universal Time is March’s full Moon—known in North America as the “Worm Moon—which by some definitions is also a supermoon.

That’s because it occurs just a couple of days before perigee, the time of the Moon’s slightly elliptical orbit when it’s closest to the Earth.

Practically-speaking that doesn’t mean very much because the best time to watch a full Moon of any kind is always at moonrise wherever you are tonight.

Star-lore of the week: Leo and its ‘realm of galaxies’

Between Denebola (36 light years distant) and Regulus in Leo, the Lion, there are some interesting (though invisible to the naked eye) objects.

The M96 or Leo I Group of galaxies is a cluster of about nine galaxies around 30 million light-years from Earth. All are just a small part of what’s known as the “local group” of galaxies close to our home, the Milky Way.

That means when you’re looking at Leo, the Lion, you’re peering outside of the Milky Way and into deep space at the galaxies beyond.

Also in this region is Wolf 359, a red dwarf star that’s one of the closest stars to us at just 7.9 light years.

Knowing a little of cosmic geography can hugely improve the enjoyment you get from the night sky.

Times and dates given apply to mid-northern latitudes. For the most accurate location-specific information consult online planetariums like Stellarium and The Sky Live. Check planet-rise/planet-set, sunrise/sunset and moonrise/moonset times for where you are.