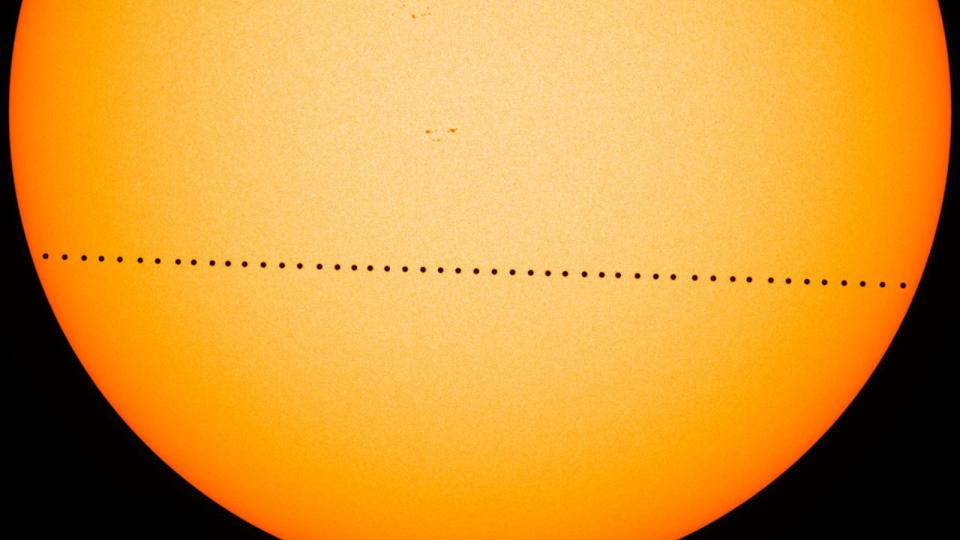 On Monday, November 11, Mercury will pass in front of the Sun as seen from Earth. It is known as a transit. It last happened in 2016, but the next one won’t happen again until 2032. Catch it if you can.

Most people won’t see the transit. While a transit of Venus is relatively easy to observe, a Mercury transit is much more difficult. Unless you have a telescope set up to view the Sun (don’t try it if you don’t know what you’re doing) Mercury is too small to distinguish.

These days the transit of Mercury is not much more than an astronomical curiosity. Amateur astronomers observe it for the challenge, but not much science is done. There was a time, however, when a Mercury transit pushed the limits of astronomy, and set the stage for one of its most important measurements: the size of the universe.

While early astronomers were experts at observing the night sky, they were limited in what they could measure. They could find the position of a star or planet at a particular time, but knew nothing of its distance. Within the solar system, they could only determine relative distance.

For example, one of the measurements astronomers can make is elongation, which is the apparent angle of a planet from the Sun. The maximum elongation of Venus is about 46°. If you assume the orbits of Venus and Earth are circular, a bit of geometry tells you that Venus is about 70% of Earth’s distance from the Sun. The maximum elongation of Mercury is about 28°, meaning Mercury is about 40% of Earth’s solar distance. But neither of these tell you their actual distance.

Over the centuries lots of relative distances were calculated, so astronomers knew the relative scale of the solar system. But Earth’s distance from the Sun was still very uncertain. In the mid-200s BCE, Aristarchus of Samos used measurements of the Sun and Moon to estimate that our planet was about 400 Earth radii from the Sun. That’s about 60 times smaller than its actual value. Hipparchus later refined that distance to 1,200 Earth radii, and it became the generally accepted value well into the 1400s.

The problem was that astronomical objects move across the sky over time. You can make an extremely good distance measurement using parallax, but that requires observing an object from two places on Earth at the same time. Mechanical clocks weren’t nearly precise enough to do that. But the transit of a planet lets you bypass the need for a clock. When two astronomers observe a transit, they know they are observing at the same time.

In the early 1600s, the race was on to observe a transit of Mercury. The first successful observation was made by Pierre Gassendi in 1631. He noted that Mercury appeared as a much smaller shadow on the Sun than expected. This meant that Earth must be much farther from the Sun than generally thought. It was the first clue to the true scale of the solar system.

In 1677 Edmund Hally and Richard Towneley both observed Mercury’s transit, and made a reasonable measure of Earth’s distance from the Sun. This calculation was further refined by observations of a Venus transit in the 1700s. While the Venus observations were the most precise, it was the transits of Mercury that first gave us an understanding of just how big the universe was.