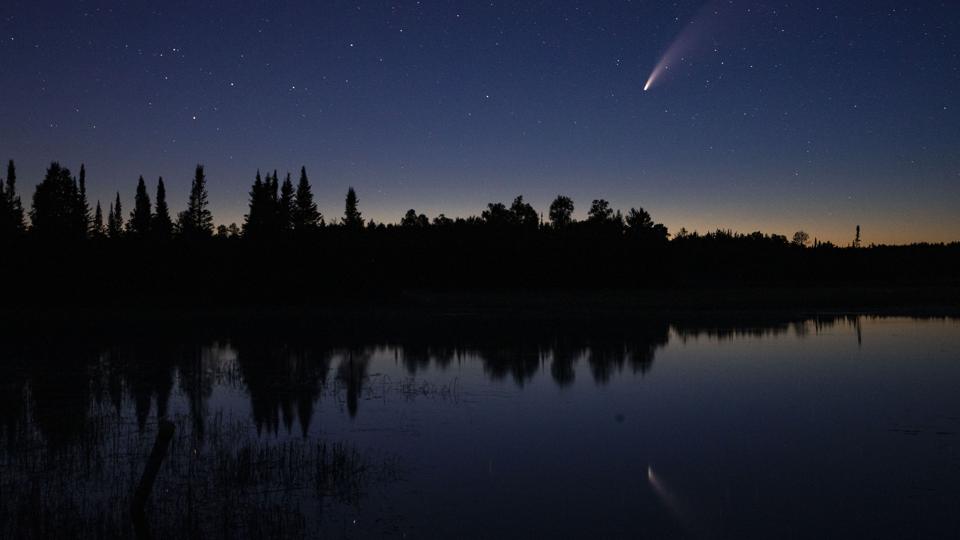 Have you seen Comet NEOWISE yet? Scroll down for night-by-night skycharts for this weekend.

This fuzzy little visitor from the outer Solar System is a magnificent sight to behold, but although a lot of people in the northern hemisphere have now seen this “Great Comet,” just as many have been struggling to find it in their night skies.

Do it right and Comet NEOWISE is unmissable—for now. Here are a few things you need to know about the comet before you go out hunting, followed by exactly how, when and where to find it:

When to look at Comet NEOWISE this weekend

Wait until 90 minutes after the time of sunset where you are. You can then look for the rest of the night because Comet NEOWISE is circumpolar—it never sets (at least for now).

Where to look at Comet NEOWISE this weekend

You need somewhere with a good, clear view to the northwest horizon. Preferably you also want to be somewhere with as little light pollution as possible. Choose a park on the edge of town rather than one in the center of a city, but if you can get as far from urban areas as possible. However, even if you get quite far away, try to keep that northern horizon free from light pollution.

There’s no need to overthink this, but as an example, it would be a bad idea to travel to a dark place southeast of Las Vegas to then look northwest for Comet NEOWISE—the glow of the city would be in exactly the “wrong” place.

The comet will be in the northwestern sky after dusk, moving towards the northeastern sky before dawn. The easiest way to find the comet is to look under the Big Dipper/Plough/Saucepan—that collection of seven bright stars that most of us will recognise. Then look down from there to the horizon and you should find the comet—by scanning the area either with the unaided eye, or with a pair of binoculars (see below).

As with all stars, the position of the stars and the comet moves slightly depending on when you look at them. These particular stars are circumpolar, so they appear to move anti-clockwise around Polaris, the North Star (the only star in the northern hemisphere’s night sky that doesn’t appear to move). It’s their orientation that appears to move most of all.

However, if you follow the curve of the tail of the Big Dipper/Plough/Saucepan you should more-or-less hit Comet NEOWISE. Here are some skycharts for mid-northern latitudes this weekend for a couple of hours after sunset:

How to find Comet NEOWISE on Friday, July 24

How to find Comet NEOWISE on Saturday, July 25

How to find Comet NEOWISE on Sunday, July 26

How to look at Comet NEOWISE this weekend

Although it should be possible to see Comet NEOWISE with the unaided eye this weekend, it is now fading. Take any pair of binoculars, which in any case has always been the best way to observe the comet over the past few weeks.

It’s important to know that the comet appears to be traveling down towards the horizon—to its tail is trailing behind it, higher in the sky. It’s beginning to glow a slight blue-green as it gradually fades.

The best way to look at the comet—whether unaided eye or through binoculars—is by using the “averted vision” technique. The human eye’s peripheral vision is the most sensitive to brightness, whereas the center of the eye is more sensitive to color. When observing the comet with the naked eye or through binoculars, look slightly to the left or right of it, and its tail. That way, your peripheral vision will better detect its brightness.

How to dark-adapt your eyes

It also helps to dark-adapt your eyes. Stand somewhere completely dark for 20 minutes and your pupils will dilate to let in as much light as possible. That way, you’ll see far more stars, and you’ll see the comet more clearly.

There’s no need to wait around; begin stargazing and looking for the comet straight away, but just bear in mind that your night vision will kick-in gradually. The best advice is also apparently the hardest for modern humans to heed; do not look at your smartphone, for its white light will completely kill your night vision.

Follow all of this advice and a glimpse of one the most scenic comet in over 20 years will be yours—but hurry!

Why nature is the next frontier for sustainable business
Trump agrees to deal in which TikTok will partner with Oracle and Walmart
Airbus announces concept designs for zero-emission, hydrogen-powered airplanes
Astranis adds former NASA Administrator Dan Goldin to advisory board
Episode 238: Facebook faces up to criticism, Climate Week conversation