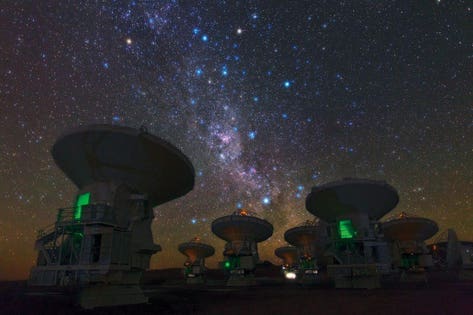 The southern Milky Way as viewed above ALMA is illustrative of one way we search for signals of intelligent aliens: through the radio band. If we found a signal, or if we transmitted a signal that was then found and responded to, it would be one of the greatest achievements in our planet’s history. As with many of humanity’s greatest endeavors, we have not made the critical breakthrough we so desperately seek, but we continue to look, explore, and learn with the best tools we can possibly construct.

It’s pretty easy to look at the world we live in today and come away feeling either extremely pessimistic or optimistic, depending on which aspects you focus on. Optimistically, you could look at our life expectancy, our technological conveniences, our high standard of living and the scientific breakthroughs we continue to make and pursue. From biotech to space exploration, from robotics to artificial intelligence, the present is incredible and the future looks even brighter.

Of course, there’s the flipside: a pessimistic point of view. Even a course look at the world shows a growing rejection of science in favor of ideology on issues from climate change to vaccinations to dental health to whether the Earth is flat or humans have landed on the Moon. We are rolling back environmental protections and seeing a rise in bigotry, isolationism, and authoritarianism. Our prospects are simultaneously both bright and dim, and what the 21st century holds will depend largely on our collective actions during the next critical decade.

This 1989 image was taken just one year after a catastrophic wildfire destroyed hundreds of thousands of acres of land and burned down countlessly many lodgepole pine trees. However, the very next year, wildflowers littered the burned forest landscape, one of the first major steps in the regrowth and regeneration of this ecosystem. Humans may wreak havoc on the planet, but nature will recover. The question of how resilient human civilization is has not yet been determined.

When you think about your own dreams for the future of humanity, what does it include? Do you think about the existential, large-scale problems the world is facing today, and how we might improve them? Depending on where you live and what issues plague your local corner of the globe, you might see:

all while we burn more fossil fuels and consume more energy, as a planet, than ever before.

The Patagonian glaciers of South America are sadly among the fastest melting in the world, but their beauty is undeniable. This photo was taken by the International Space Station, which completes a full orbit around Earth in approximately 90 minutes. Just minutes earlier, the ISS was flying over a tropical rainforest, showcasing how small our planet truly is and how a huge diversity of ecosystems are threatened by the changes humans have wrought upon our planet.

The history of humanity is a history of survival through endurance, tool-making and tool use, and through outsmarting every other form of nature: animal, plant, fungus, and even non-living threats. We have leveraged our acquired knowledge of the natural world ⁠— including the laws and rules that govern how it works ⁠— to rise to prominence and defeat so many of the natural challenges that every other species has been constrained by.

The development of agriculture, first by farming and later through ranching, revolutionized humanity’s relationship with food. Sanitation, through infrastructure projects like granaries, sewers, and (more recently) transit systems have enabled our population centers to grow from villages to towns to cities to the modern metropolis. And the industrial revolution, coupled with the rise of electricity, has led humanity to conquer a multitude of inconvenient obstacles, including even the darkness of night itself.

This composite image of the Earth at night shows the effects of artificial lighting on how our planet appears along the portion that isn’t illuminated by sunlight. This image was constructed based on 1994 and 1995 data, and the intervening 25 years have seen approximately a twofold increase in the amount of light humans create at night on Earth. We have conquered the night, but only at a great environmental cost.

But our dominance over the environment and our technological progress comes with a cost: as we’ve gained the ability to transform our planet, we’ve ended up transforming it in more ways than we imagined. This was true in the 20th century as well, as problems like:

all plagued our society. Each one of these problems, at the time, seemed like an existential threat to our advanced civilization continuing as we know it.

The famed ‘dust bowl’ of the 1930s occurred in the United States as a combination of sustained drought, winds, and sub-optimal farming practices led to an agricultural disaster. Elsewhere in the world, these conditions, even with better farming practices, are still at risk of arising. Here, young Australian boy Harry Taylor plays on the dust bowl his family farm became during the 2018 drought. This drought was cited by many as the worst in recorded history, rivaling the catastrophe of 1902 that no one who lived through it is still alive to recount. (Brook Mitchell/Getty Images)

However, for each of these problems, humanity was able to band together and address these obstacles. Improved sanitation practices and new medical therapies help manage or even cure those afflicted with a myriad of infectious diseases and illnesses. Better farming practices have ended the risk of another dust bowl. Air and water regulations make it safe for us to breathe air and drink water.

Even the two most recent problems we faced ⁠— acid rain and the ozone layer ⁠— were able to be solved. Through worldwide agreements on what can and cannot be produced and sold to consumers, we’ve seen the pH of rain return to normal and the hole in the ozone has not only stopped growing, but has begun to repair itself.

From 1998 to the present, the mid-latitudes of Earth have seen a rise in ozone levels in the upper stratosphere. However, the lower stratosphere indicates an offset of the same magnitude. This is evidence that even as the hole in the ozone repairs itself, we must remain vigilant in ensuring this problem is as thoroughly ‘solved’ as we think our actions should have rendered it.

Of course, the 21st century poses challenges for humanity that we’ve never faced before. The internet has been a great force for the worldwide spread and access of factual information in places where it had previously never reached, but it’s also a great force for the spread of misinformation. We’ve explored more of our planet than ever, and are realizing that humanity is responsible for a currently ongoing mass extinction that Earth has not witnessed for tens of millions of years.

The CO2 concentration in the atmosphere is higher than humans have ever experienced. Global average temperatures continue to rise, as do sea levels, now at an accelerated rate, and will continue to do so for decades. The human population continues to grow, and the past 12 months has seen our species add more CO2 to the atmosphere than any other 12 month span in history.

Although the CO2 emissions produced by the United States this past year is still 13% below the 2005 maximum produced in this country, the world’s total emissions have jumped by 23% since that same time. The past few years have seen a continued increase in global greenhouse gas emissions, as energy use has taken off largely due to the rise of new computing practices like Blockchain and Cryptocurrency.

We now live in a time where the actions of a small group of people ⁠— whether through malicious or benign intentions ⁠— are capable of leading to global catastrophe. It’s not just climate change or the threat of nuclear war that hangs over us; it’s a slew of facts.

It matters that a mass extinction is occurring right now: we’re destroying this planet’s proverbial “book of life” before we’ve even read it.

It matters that computers are permeating ever-increasing facets of our life, as humanity’s recently rising electricity use (after a plateau earlier this decade) is almost entirely due to new computational uses, like cryptocurrencies and blockchain.

It matters that the population is greater than ever before, as managing and distributing the edible food and drinkable water we produce is a greater challenge than ever before.

This August 2019 photograph shows wheat fields (foreground) and canola fields (towards the horizon) grown for food and oil to be pressed from the plant’s seed, respectively. According to the South African government’s statistical service, “The agriculture, forestry and fishing industry decreased by 13,2% in (2019’s) first quarter. The decrease was mainly because of a drop in the production of field crops and horticultural products”. Drought, climate change, economic downturn, security issues in rural areas, and uncertainty about the future of land reform in South Africa all pose difficulties for the food, water, and even the economic security of the country. (RODGER BOSCH/AFP/Getty Images)

The big questions facing our species now is how we will tackle these problems, and many of the other existential worries facing humanity today. Can we survive our technological infancy? Can we overcome our greed, our bigotries, and our squabbling nature? Can we band together to find and enact solutions that benefit us all: friend and foe alike?

This Wednesday, October 2, 2019, at 7 PM Eastern Time (4 PM Pacific Time), Sir Martin Rees of Cambridge will deliver a public lecture at Perimeter Institute entitled “Surviving the Century.” Martin’s latest book, On The Future: Prospects For Humanity, was released in 2018, and his lecture will closely follow much of the ground covered in that tome.

I’m so pleased to be able to live-blog this talk, which you can follow along with in real-time below, or by reading at any time after the conclusion of the lecture. It’s always wonderful to get a firsthand perspective on science and society from someone who’s concerned with the ever-changing role of a good scientist — who pushes our understanding forward for the betterment of humanity — and their responsibility to society.

After all, as climate scientist Ben Santer eloquently put it:

Our understanding of practically everything is more advanced than ever. Maybe, if we listen to that understanding, we can figure out the best way forward.

(The live-blog will begin, below, just before 7 PM Eastern/4 PM Pacific time. All times are displayed in bold and in Pacific time, and correspond to the actual time the commentary was published.)