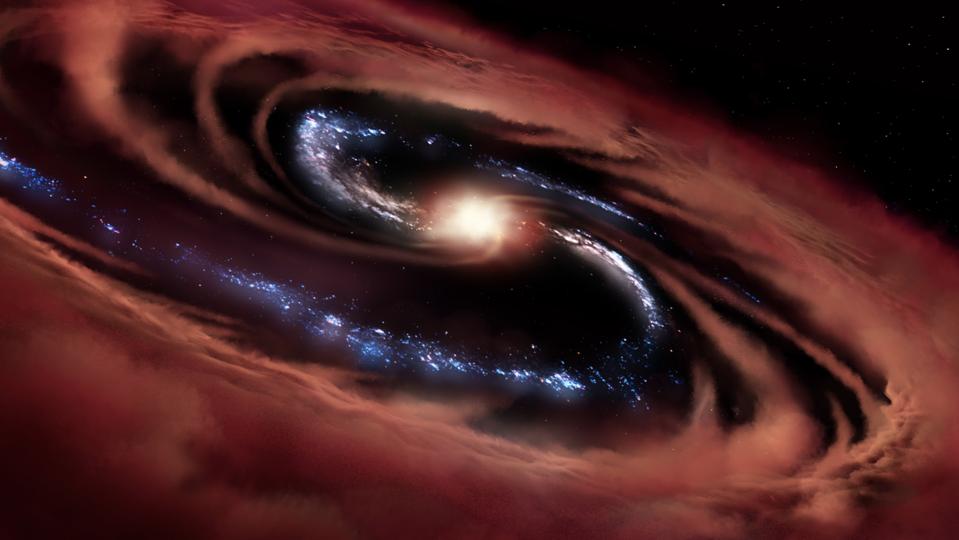 A research team at the University of Kansas has found something a little strange in the cosmos. A galaxy that sits 5.25 billion light-years away has been creating new stars when it should be past that time in its life cycle. It’s known as CQ 4479 and at the moment it is considered to be a quasar. A regular quasar is simply a galaxy that has a luminous active galactic nucleus. Inside that nucleus is a supermassive black hole that is slowly pulling all of the nearby material towards it. As the material falls toward the black hole energy gets released in the form of electromagnetic radiation which then heats the gasses in the surrounding accretion disk. This heat prevents the formation of new stars.

In a cold quasar, there is not enough heat to keep stars from forming. CQ 4479 is showing the properties of a regular and a cold quasar. Which means that its sending out electromagnetic radiation but stars are still forming.

How do we know?

Scientists are trying to understand how CQ 4479 can have a luminous active galactic nucleus and a large amount of star producing cold gases. Based on what we know about how galaxies work and how stars are formed this should not be possible. However, according to the research done by Kevin Cooke, lead author and postdoctoral researcher in KU’s Department of Physics & Astronomy and co-author Allison Kirkpatrick, assistant professor of physics & astronomy at KU, it is, in fact, happening. There findings were recently published in the Astrophysical Journal.

This cosmic oddity was observed using NASA’s SOFIA infrared telescope and FUV-FIR photometry and optical spectroscopy. The data that was collected came back with contradictory information about the galaxy.

All of this points to the possibility that the galaxy is changing from having an active nucleus to an inactive one. As Kirkpatrick herself put it “I think this is a galaxy undergoing a midlife crisis. It’s going through one last burst of star formation. Most of its solar mass is already in place. It’s forming a few more stars now, and the thing that’s ultimately going to kill it is starting to kick in.”

To confirm this theory the team will need better data. Currently, they cannot get the best images of CQ 4479 because the nucleus is so bright that it outshines the rest of the galaxy, making everything else hard to see. Further study could prove to be useful in our understanding of the life cycle of galaxies and star formation. However, to collect new data more powerful equipment is required. The team has put in the paperwork to use NASA’s James Webb Space Telescope which is set to launch on Oct 31, 2021. Hopefully, that will shed some light on the subject and they will be able to understand what is happening.