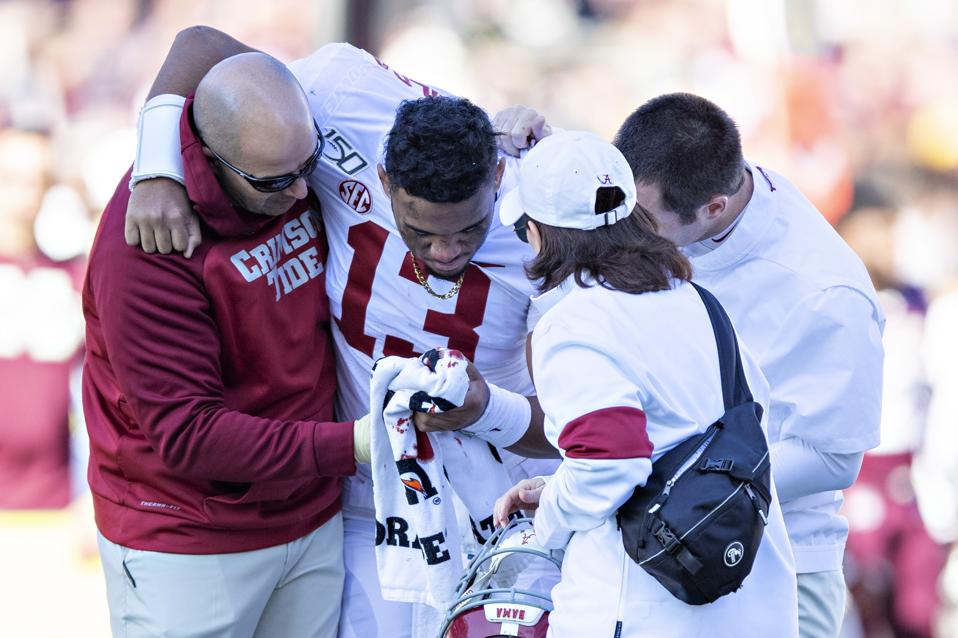 Today, the University of Alabama football team won 38-7 over Mississippi State but at the same time suffered a big loss. Their star quarterback and Heisman Trophy candidate Tua Tagovailoa took a tumble while tackled with a ton of defenders on top of him. The result was a right hip injury as seen after the 4:40 mark in this ESPN video:

According to ESPN’s Mark Schlabach, Tagovailoa is done for the season with a right hip dislocation and a posterior wall fracture. Ouch plus ouch multiplied by ouch.

Normally, your thigh bone (also called your femur in fancy medical speak) connects to your hip bone (also called your pelvic bone) via a ball-and-socket joint. Your femur rhymes with the word lemur, screamer, and tramp steamer and extends from your hip down to your knee. As you can see in the picture below, the top portion of your femur (otherwise known as your femoral head) forms a ball that sits inside a round pit in the side of your pelvic bone that serves as a socket:

The socket is otherwise known in medical speak as the acetabulum. It is pronounced “ass-eh-tab-yule-um.” The first part of this word may be easy to remember because the structure is close to that part of your body. Assuming that you are not a caterpillar, you should have no more than two femurs and two acetabulums, one on each side of your body.

This ball-and-socket type of arrangement types allows you to move your thigh and hips in many different directions and do things like splits, upward dog, high kicks, and The Funky Chicken and The Sprinkler dance, not necessarily in that order. Muscles and ligaments are supposed to keep your femoral head in your acetabulum on each side, just like your friends are supposed to keep you from doing The Sprinkler on the dance floor.

But both of these restrictions aren’t always the case. When a strong force pushes your femoral head outside your acetabular socket, it’s called a hip dislocation. This can occur more readily when a portion of your acetabulum is broken (which in medical speak is a fracture) thus compromising what’s supposed to be a rather tight fit between your ball and socket. In other words, your ball is out of place.

Of course, whenever a fracture or dislocation occurs, the big question is whether surgery is the next step. As the saying goes, surgery is only minor when it is done on somebody else. And hip surgery can be quite major surgery. Therefore, typically you want to avoid surgery whenever you can.

With a hip dislocation and acetabular fracture, if your femoral head can be put back in your socket, if all of your bones remain in the right places with the edges of the fracture directly next to each other, and if there is no other damage to your surrounding structures, you could avoid surgery. Time and keeping weight off your affected hip for a while can allow the fracture to heal. That means using crutches or a walker for up to three months and certainly no Funky Chicken. That may also mean wearing or using some type of device to keep your femoral head from slipping out of your acetabular socket until things in and around your hip are adequately strengthened.

Most cases of acetabular fractures require surgery though. So that you can continue to do The Sprinkler at inappropriate occasions (which is basically every occasion), in the femoral-acetabular joint, your ball needs to be very smooth and so does the surface of your socket. This means that any disruption should be fixed. During the operation, the surgeon will move all the pieces of your bones back to where they belong and may insert screws and a metal plate to hold them in place. If the damage happens to be too great, the surgeon may have to replace your hip with an artificial hip.

After surgery, you can’t place any weight on your hip until at least six to eight weeks after the surgery. Then you can begin to place some weight but not all until about three to four months of healing have occurred. Whether you get surgery or not, effective physical therapy will be an essential part of your recovery. Thus, it is important to not only get a good surgeon but also a a good physical therapist.

If you are wondering when Tagovailoa may return to football, assuming that he gets surgery, consider what the American Academy of Orthopedic Surgery (AAOS) website says: “it can take from 6 to 12 months to return to more vigorous sports activities.”

Therefore, regardless of whether Tagovailoa ends up getting surgery, he won’t be available for the Crimson Tide for the rest of the season. Of course, if you are thinking of writing off Nick Saban’s Alabama team for this season, realize that his team is like Thanos’ army. It’s very deep with lots of talent, and with five national championships, Saban has gotta have the Infinity Stones hidden somewhere. The bigger question is how will this injury affect Tagovailoa, who as a junior may enter the NFL draft next year. We aren’t hip to the full extent of Tagovailoa’s injury yet. Knowing more about this and the subsequent outcome of his surgery, if he gets surgery, will then help determine if and when he can make a full recovery.