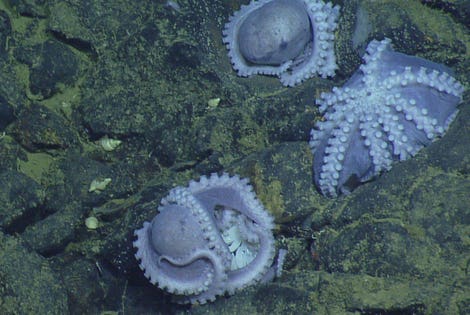 Approximately 75 miles west of the Monterey, California exists the Davidson Seamount, an extinct volcano and one of the world’s largest underwater mountains. Despite being nearly one-quarter the height of Mount Everest, its summit is still 4,000 feet below the water’s surface. The Davidson Seamount resides within the Monterey Bay National Marine Sanctuary and harbors a wide variety of sea life. Researchers aboard the E/V Nautilus recently observed a particularly unusual phenomenon at the base of the former volcano – an immense assemblage of octopuses (Mussoctopus robustus).

Little is know about octopuses in the genus Mussoctopus, but it is well-established that they do not produce their own ink. This may be because these octopuses have evolved to live in the deep sea where little light penetrates and using ink to obscure prospective predators may not be an effective survival strategy.

The octopuses seen at the Davidson Seamount were nestled in the crevices of volcanic rock to brood eggs. Female octopuses assume a ”brooding pose” to protect their eggs – this consists of an inverted posture, with the octopuses’ mouthparts exposed to the surrounding environment and their tentacles extending around their “heads” (anatomically referred to as ‘mantles’).

The octopuses may have selected this site for brooding due to its “shimmering seeps”, which likely emit warm water that is conducive for the development of the young octopuses the mothers are brooding. Additionally, the bubbling waters may increase the amount of oxygen available to the mothers during this delicate, but energy-consuming period.

Although a cluster of 100 octopuses was observed earlier this year near Costa Rica, this is the first sighting of a Mussoctopus congregation along the coast of the western United States. Researchers estimated that there were over 1,000 octopuses in this aggregation, which is possibly the largest gathering of octopuses ever observed in a single area. Given that octopuses are generally solitary creatures, this enormous co-brooding event is especially unexpected.

According to the Chief Scientist of this E/V Nautilus expedition, Chad King, “I’ve never in my career come across something like this, where these could potentially be nursery habitats, and another extremely important reason why we need to protect this area.”

Analyze change over time to predict what’s next
Astronomers detect a huge gas giant orbiting a much smaller dead star
Episode 236: Banking for the planet and behind the scenes of Generation Green New Deal
Bermuda Could Suffer Direct Hit From Strengthening Hurricane Paulette On Sunday Night
How science should support researchers with visual impairments