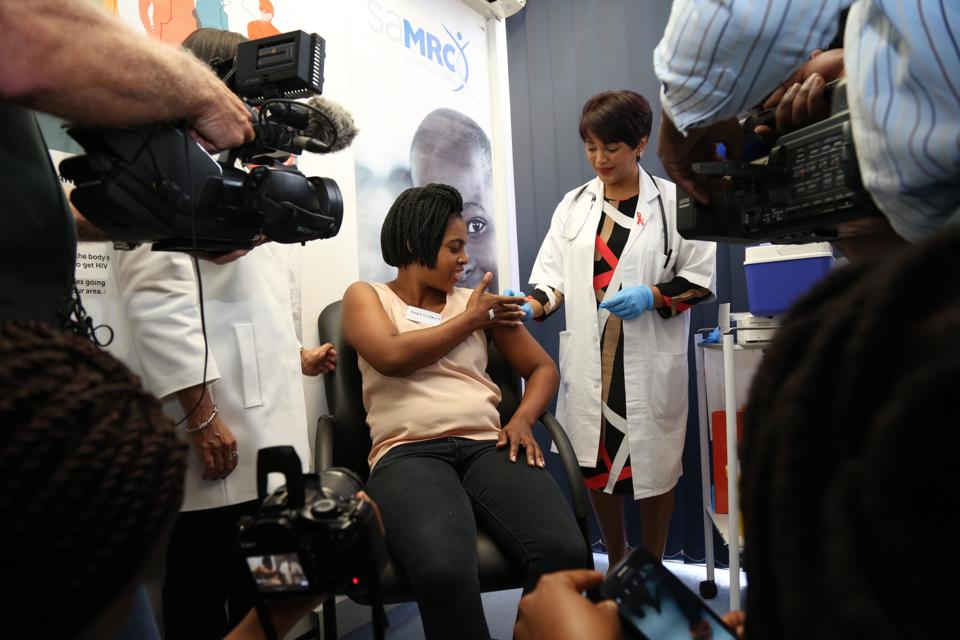 Wait for it. Wait for it. That’s what the world has been doing ever since 1984 with the “it” being an effective and safe HIV vaccine. That year Margaret Heckler, then the U.S. Secretary of Health and Human Services, said in a press conference, “we hope to have a vaccine ready for testing in about two years,” and added, “”yet another terrible disease is about to yield to patience, persistence and outright genius.” Those words offered some encouragement that an HIV vaccine could have been available for use before the end of the 1980’s. Well, that prediction turned out to be off by oh about 30 years and counting. But after years of “wait for it,” there is optimism that the legendary arrival of a real HIV vaccine could happen as soon as 2021.

That’s because there are now, count them, three different late-stage human clinical trials of HIV vaccine candidates underway. That’s three more than in 1984, when scientists had just identified the human immunodeficiency virus (HIV) to be the cause of acquired immunodeficiency syndrome (AIDS). Ah, the 1980’s were naively optimistic in more ways than one. Identifying a virus by no means guarantees that an effective and safe vaccine can be developed anytime soon.

But here we are, after decades of disappointments, eyeing three clinical trials named HVTN 702, Imbokodo, and Mosaico. If you are wondering what HVTN is, besides being an unpronounceable string of consonants, it is an acronym for the HIV Vaccine Trials Network. Here’s where each of these three trials currently stands:

Beginning in October 2016, this is a Phase III/IIb clinical trial to study the efficacy, safety, and tolerability of a vaccine candidate called ALVAC-HIV (vCP2438) + Bivalent Subtype C gp120/MF59. This may sound like an amazingly effective password to use but actually represents two types of intramuscular injections.

The first type includes a re-engineered canarypox virus combined with pieces of HIV that can’t cause HIV infection on their own. This is the priming part of the vaccine, the part that primes or alerts your immune to the virus. It is, in a way, the canarypox in the coal mine that warns your defense system. The second type of injection consists of pieces of the protein envelope that surround the HIV along with an adjuvant that uses squalene. An adjuvant is a substance that doesn’t on its own generate immune responses but instead can boost your immune system’s responses to parts of the virus. This is the boost part of the so-called “prime-boost” strategy. Once the the immune system is alerted to the virus, this part boosts the troops, which are B cells.

The setting for the trial is South Africa. Already 5,400 HIV-negative adults from 18 years to 35 years old are enrolled. They will be followed for 24 to 36 months to determine if they develop any new HIV infections after enrollment. Participants will receive a series of intramuscular injections of either the vaccine or a placebo that is basically just salt water. Currently, the trial is expected to conclude July 2021. The National Institute of Allergy and Infectious Diseases (NIAID) is sponsoring this trial.

This NIAID video offers a tour of a HVTN 702 trial site:

This VICE News video, released around the time of the launch of HVTN 702, touched upon the burden of HIV in South Africa and why this country served as the setting for the trial:

This Phase IIb study began in November 2017 and completed enrollment in May 2019 of 2,600 sexually-active women between the ages of 18 and 35 in five southern African countries: Malawi, Mozambique, South Africa, Zambia, and Zimbabwe. Like the vaccine used in HTVN 702, the vaccine for the Imbokodo Study consists of two different types of injections, albeit with different ingredients, and uses a “prime-boost” approach as well. The prime injection (called Ad26.Mos4.HIV) includes an adenovirus, a virus that typically causes the common cold, that’s been re-engineered and combined with pieces of HIV. The boost injection consists of pieces of the HIV protein envelope along with an aluminum phosphate adjuvant. Like the HVTN 702 trial, this trial will randomly assign participants to receive either the vaccine or a salt water placebo and follow them to see if they get infected with HIV in locations where HIV prevalence is high. The trial is expected to conclude February 2022. Janssen Vaccines and Prevention B.V. are the sponsors for this trial.

Unlike the other two trials, this Phase III trial will proceed in multiple sites in North America, South America and Europe rather than in southern Africa. The study just launched in July of this year and will aim to enroll 3,800 HIV-negative men and transgender people who are between 18 and 60 years old and have sex with either men or transgender people. The Mosaico trial will use the same vaccine as the Imbokodo trial. Janssen Vaccines and Prevention B.V. are the sponsors for this trial as well with NIAID providing funding.

Another Reason for Optimism

By late 2020, we should have a much better sense of how at least two of these three trials are going. An additional reason for optimism is that the HVTN 702 trial is using a modified regimen and adjusted version of a vaccine candidate that showed some success in preventing HIV infections in the previous completed RV144 clinical trial. That trial, which had nothing to do with recreational vehicles, included over 16,000 study participants in Thailand and concluded in 2009. Although the findings were encouraging, showing the vaccine to reduce HIV infections by about 30%, scientists didn’t consider such a protection level high enough to merit moving forward with the vaccine as it was. They subsequently made changes bringing us to the vaccine and regimen that’s now part of HVTN 702.

Why Developing an HIV Vaccine Has Been So Challenging

While the world is closer to an HIV vaccine than it’s ever been, don’t forget that HIV is a tough, tough villain. HIV has a number of features that make it difficult to vaccinated against. One is that it doesn’t naturally stimulate enough of an immune response when it infects you. As Seth Berkley, CEO of Gavi, explained in this TED-Ed talk, HIV uses various methods to distract and hide from your immune system:

That has meant that scientists have had to find clever ways to prod your immune system to marshal its troops. Secondly, HIV is a bit like Loki or Mystique, coming in many different forms. An immune response against one form may not be effective against other forms. Third is lack of correlates of protective immunity. These are ways to measure your level of immunity against HIV. For example, if you want to check your immunity against the measles after vaccination, you can measure levels of antibodies to the measles virus. The equivalent is not there for HIV.

Finally, an HIV vaccine has to offer a high enough level of protection. After all, people may become more lax with other HIV prevention measures such as practicing safe sex if they believe the vaccine is supposed to offer a certain level of protection. Offering a vaccine with relatively low protective levels could be like giving you a set of clothes that may or may not dissolve. Thinking that you are fully clothed, you may blithely go to work or on a date, when, oops. For these reasons, a vaccine may have to offer at least 50% protective efficacy to be viable for use.

All of these challenges means that you should “wait for it” and see what actually happens with these three trials before making bold predictions about 2021. The world has never been closer to a real HIV vaccine. So there is indeed reason for optimism. HIV is a really tough foe, but if a vaccine can emerge that offers at least 50% protection against HIV infection along with being acceptably safe, 2021 could be legendary.

Fluids flow faster in liquid-walled channels – Physics World
4 views on the future of retail and the shopping experience
Why Cities Have So Many Pigeons
NASA set to resume human spaceflight from U.S. soil with historic SpaceX launch
Artificial eye has the potential to outperform human vision – Physics World