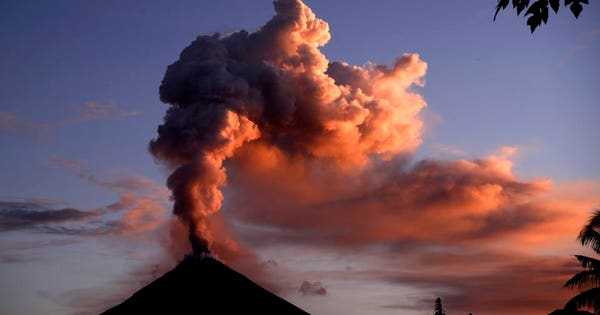 Soputan, a stratovolcano in Indonesia, is showing signs of restlessness, according to volcanologists in the region. This volcano also happens to be on Sulawesi, the island that was just subjected to a horrific earthquake and tsunami.

Let me be absolutely clear before we dive in to the details here: there’s no way of saying whether this volcano will erupt, or when. It’s simply showing signs of increased activity beneath the surface, which means that scientists are maintaining a careful watch. Unless it’s already erupting by the time you read this, do not buy into stories that are making apocalyptic prophecies about the future.

Soputan, per the Smithsonian Institution’s Global Volcanism Program, is one of the island’s most active volcanoes. According to a 2012 review of the volcano, it’s quite complex. Although it features free-flowing, stream-like basaltic lava, something typified by a shield volcano like Hawaii’s Kilauea, its strange plumbing system means that it can also produce explosive eruptions.

There are historical records of eruptions of varying types going back to 1450 CE, including effusive lava flows and high-altitude ash plumes to pyroclastic flows – those superheated, fast-moving clouds of gas and ash that most recently killed dozens of people on the flanks of Guatemala’s Volcan de Fuego. These can form when the ash column loses buoyancy and collapses, or when a thick lava dome growth bursts and spills over the crater rim. There’s also a risk of lahars, mudflows made of volcanic debris, that form when rain saturates the volcanic ash after it’s been deposited.

Soputan is a bit of a pyrotechnical artiste, capable of many things, all of which can be deadly if enough people are in the way. It also means that it’s somewhat unpredictable.

Per that 2012 paper, “a rapid ramp up in seismicity preceding the recent eruptions suggests that future eruptions may have no more than a few days of seismic warning.” The authors also note that the risk to people is greatest for those located on the southern and western flanks of the volcano, where things like pyroclastic flows are naturally funnelled into.

So, what’s happening with Soputan right now? According to a press release by the Center for Volcanology and Geological Disaster Mitigation (PVMBG), released on its MAGMA site – and highlighted by Concord University volcanologist Janine Krippner – it’s showing increased seismic and thermal activity.

Thermal cameras are showing that the top of the volcano is hotter than it was a few weeks back, suggesting a high temperature magma is pooling there. Although no ash plumes have been observed, it appears that far more volcanic gas is escaping at the summit today compared to a month ago. In addition, back in September, there were around 2 quakes on the volcano per day. Now, on average, there are 101 per day, and it appears that number is now increasing very rapidly. This could potentially indicate magma moving through the crust, perhaps toward the surface.

This all suggests that, as the PVMBG puts it, “the potential for an eruption at Soputan has increased.” The local alert level has been raised, and several recommendations have gone out.

The most important is that there is now an exclusion zone 4 kilometres (2.5 miles) around the volcano, which extends to 6.5 kilometres (about 4 miles) around the south and western flanks historically known to channel volcanic flows. Communities in the area are advised to have their face masks ready in case of ash fallout, and warnings about the potential for lahars, those incredibly dangerous mudflows, have also been issued. A warning for planes flying near the area has also been released.

Arguably, the most important thing about this press release was that it gave me a chance to get ahead of the sensationalism and misinformation. No matter how clear and cautious the authorities in Indonesia are being, and will continue to be, there’s no doubt that you’ll see headlines and stories screaming about an imminent and/or deadly eruption any second now.

So, let’s clear up a few things. I have a primer here that explains whether or not you should believe such headlines, but in this specific case, I’ll  explain what this activity at the volcano definitely isn’t telling us.

The geological activity does not reveal when, or even if, the volcano will erupt. There’s no signal right now that an eruption is imminent, just that it’s giving off signs that it is closer to an eruptive state than it was a few months back. Soputan, like plenty of explosive-style volcanoes, does not follow a clear pattern of eruptions, and there’s no smoking gun weeks in advance that heralds the exact time of an eruption. The best thing authorities can do is to monitor it, and issue warnings like this one.

There’s also no way to tell how it will erupt. You can make broad generalisations based on its eruptive history, but no-one can say if there will be an ash column of a particular height and duration, lahars, lava flows, pyroclastic flows, and so forth.

In both cases, if this type of geological activity continues to ramp up, a heightened eruption alert may be issued. The volcano may then, hours or days afterwards, erupt. It also may not. The volcanologists are doing the best with the data they’ve got; if there are indications that an eruption of any kind if increasingly likely, they will keep the relevant authorities updated to make sure that people are kept away just in case one does occur.

I know, uncertainty’s awful, isn’t it? Sadly, that’s the way the world works for now, and an abundance of caution early on is better than incorrect attempts at certainty. Misinformation causes panic and can endanger lives, whether it’s intentional or accidental, so it’s best to stick with what is known rather than what is unknown.

Speaking of which, it’s likely that several outlets will try to connect the recent earthquake and tsunami with Soputan’s restlessness. The ability of earthquakes to trigger volcanic eruptions is still heavily debated, and at present, there’s not enough convincing evidence to link the two. At the very least you’d need the volcano to be primed to erupt for an earthquake to potentially trigger it.

Either way, the key piece of information here is that the volcano has been getting more agitated for some time now, since at least August – way before the earthquake of last Friday occurred. You can’t just link the two because they happened, or are happening, contemporaneously.

“I know it is easy to jump to conclusions about volcanic activity being linked to earthquakes when they are in the news, but the reality is that Indonesia is a very active country when it comes to both earthquakes and volcanic eruptions,” Krippner says.

“The activity at Soputan has been increasing for a few months now,” which isn’t anything new. The key point here, she emphasises, is that it has reached a point where people in the area need to pay attention.”