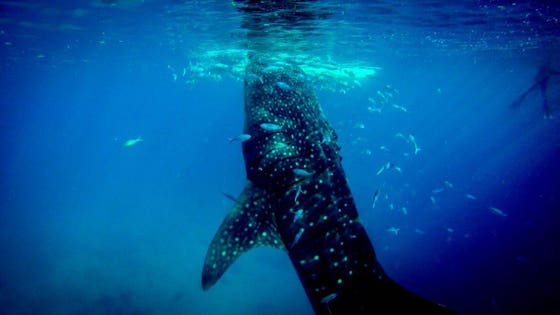 The internet (sort of) broke when research came out that the second smallest member of the hammerhead family, bonnethead sharks (Sphyrna tiburo), eat and digest seagrass. This made them the first known omnivorous shark. But it’s about to be joined at the dinner table with a larger shark species: the whale shark (Rhincodon typus).

Whale sharks hold many animal kingdom records, as they are the largest species of shark, reaching lengths of 30 feet or more and weighing in at more than 20 tons. Their starry constellation pattern makes it one of the most recognizable of the sharks in the carpet shark family, Orectolobidae. The carpet sharks are a diverse group with varying sizes, looks, diets, and habits. Preferring warm waters, whale sharks are seen in all tropical seas, and are famous for their spring migration to various “hot spots” around the world, such as Ningaloo Reef off Western Australia.

Although their size may scare many, they are a gentle giant and a filter feeder. It engorges itself by filtering massive amounts oceanic water to eat krill, fish eggs, sometimes small fish, squid, or prawns. It was thought they were carnivorous like all other sharks… until now. Researchers in Japan recently uncovered that whale sharks diets are a mixture of fish, sea plants, and sometimes they even periodically fast! Why the fast is a mystery, although it may be either by choice or because they just can’t find enough food to sustain themselves.

If it’s the latter, it isn’t good. Whale sharks have been classified as Endangered by the International Union for the Conservation of Nature Red List of Threatened Species™. The IUCN Red List is the “world’s most comprehensive inventory of the global conservation status of plant and animal species,” according to their website, and they recently assessed 31% of sharks and rays to be threatened with extinction, an increase from the previous 25% number. Whale shark numbers worldwide have gone down due to a number of human-related threats such as fishing, fishery bycatch, vessel strikes, and other more local or regional threats.

Whale shark swimming in a clean ocean- but for how long will it stay clean?Jeremy Bishop/Unsplash

That’s why this new information in regards to their diet is so interesting, from a conservation standpoint. In order to truly conserve and protect a species, one must fully know it. And currently, there is a lot we don’t know about whale sharks.

The team, led by researchers at the University of Tokyo, took blood and tissue samples from eight whale sharks that were caught in fishing nets off Japan between 2015 and 2016. The researchers freed the animals once samples were collected. They also took blood and tissue samples from three whale sharks currently residing in the Okinawa Churaumi Aquarium in Okinawa, Japan. “Similar to blood tests performed when you visit the doctor, we are able to assess the health of whale sharks based on the contents of their blood,” said Alex Wyatt, a research biologist in the Atmosphere and Ocean Research Institute at the University of Tokyo and lead author of the study, to ZME Science. “We combine blood tests and tissue isotope analyses to create an accurate health check for the animals.”

The whale sharks at the aquarium are fed a regular diet of two species of krill, with supplements of squid, fish, and prawns. Researchers sampled them six different times over the course of 2012. Wyatt and the team were able to track stable forms of carbon and nitrogen in the shark tissue collected, which allowed the researchers to track what (and when) they had eaten. The data showed they ate a carnivorous diet, which makes sense, given their normal diet at the aquarium of no greens. The researchers also showed that these sharks fasted for two to three days before going back to eating about 90 pounds (45 kg) per day. Meanwhile, the whale sharks in the wild, had blood and tissue chemistry showing that roughly half of their diet came from plant materials, such as algae or sea grass. Two out of the eight wild sharks sampled also appeared to be fasting or starving at the time the blood and tissue samples were taken.

While eating their greens and periodically fasting may be a never-before-known part of their biology, it could also point to a more distressing reason: that whale sharks are in dire trouble. “If whale sharks are depending on omnivory as a response to prey reductions, in response for instance to fishing pressures or climate change, this has significant conservation implications,” says Wyatt. Wyatt believes whale sharks don’t eat while migrating; and that the fasting sharks in the Japanese aquarium could have been refusing to eat based on their normal, migratory routines.

Wyatt says the findings might be applicable to only particular wild populations of whale sharks, and is making preparations to carry out more thorough health checks in the future. This study has been published in the journal Ecological Monographs

Former Pollen employees were asked to sign an ‘NDA masked as a severance agreement’
Work on JWST ramps up again
How to upgrade your at-home videoconference setup: Lighting edition
India’s richest man built a telecom operator everyone wants a piece of
U.S. Space Force to expand presence inside the Pentagon