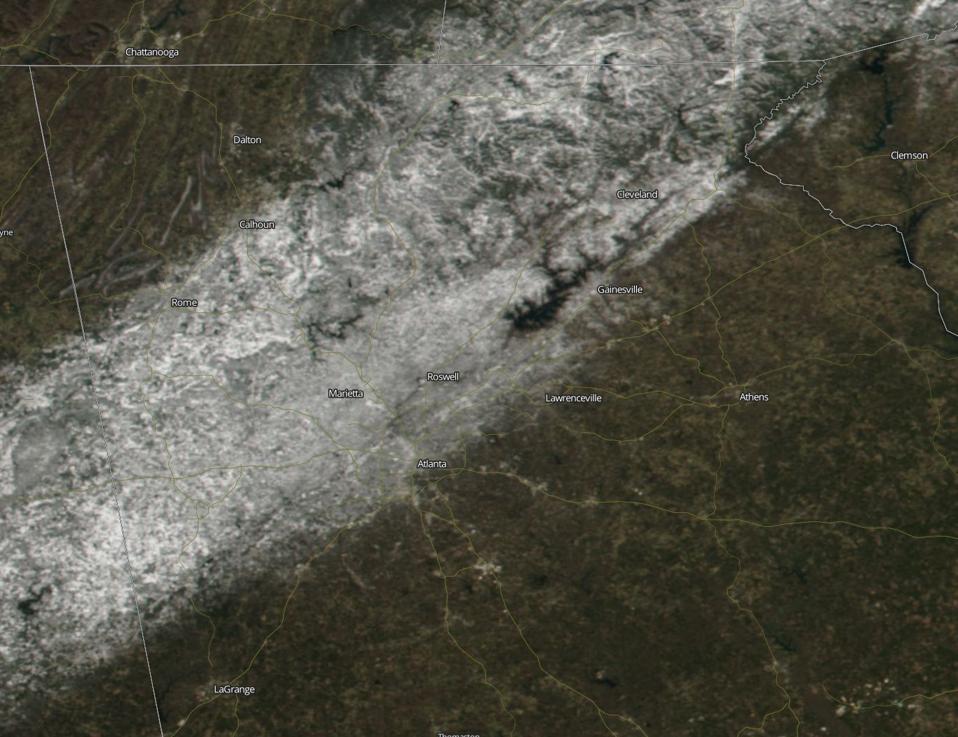 As meteorologists, there are a “bag of questions” that we always receive from people in our public and professional lives. Some of these questions include:

Since I live in the Deep South, I generally prepare myself for this question also: Are we going to get any snow this year? For many of you reading this, the answer is “Yes” because you live in a climatologically and geographically-conducive region for snowfall. However in the Deep South (and even in the Washington DC area where I previously lived), there are at least 3 credible ways that I answer the question depending on my mood and available time (smile).

I was inspired to write this article because just the other day a family member asked me if we were going to get any snow this year. Meteorologists in much of the gray shaded area in the map below undoubtedly receive the same question. Since I live in Georgia, I will use it as a backdrop for this discussion. Here are my 3 perfectly viable answers:

PROBABLY. This answer is based simply on the climatology of the area. According to the Southeast Regional Climate Center at the University of North Carolina, Atlanta, Georgia receives 2.2 inches of snowfall per year. This would suggests that snow is likely at some point this year based on annualized averages. For a list of average annual snowfall totals in major U.S. cities, NOAA’s National Centers For Environmental Information maintains the website found at this link.

I DON’T KNOW. Though it sounds flippant. This may be the most accurate answer. I know that many meteorologists would likely not give this answer because we don’t like to present a perception that “we don’t know.” There is already a perception by many people that meteorologists are “guessing” when, in fact, we use a host of computer models, satellites, observations, and forecaster knowledge. For example, I have found that many people don’t really know what “% chance of rain” actually means. I explored this in a previous Forbes article. Though there is often areal coverage in a “percent chance of rain,” many meteorologists won’t say there is a 50% chance of rain (even if that is what the data shows) because of the fear that people will interpret it as 50/50 or a coin toss. Let me further break down, the “I don’t know” answer based on simple statistics.

Earlier, I noted that Atlanta receives approximately 2 inches of snow per year. However, let’s look closely at averages. We calculate the average or mean by taking the sum of the measurements and dividing it by the total number of measurements. Each of the following hypothetical snowfall totals over a 3-year period in Atlanta would yield an average of 2 inches:

This simply means that we could get no snow this year in Atlanta and still maintain the average of 2 inches because of a year with a relatively significant (for us) snowfall.

IT DEPENDS. I would give this answer when trying to explain that meteorological forecasts are not as reliable beyond about 10-14 days or so. A scientific study from Pennsylvania State University was recently published in the Journal of Atmospheric Sciences. It affirmed what most meteorologists have long understood about the atmosphere. Our models predict how a dynamically-evolving fluid on a rotating planet is changing based on a set of initial observations and complex equations. The problem with this process is what legendary meteorologist Edward Lorenz articulated: The atmospheric system is chaotic and non-linear so there will be limits to its predictability. Hopefully, it is clear now why it is somewhat meaningless to ask me on December 9th if Atlanta is going to receive snowfall in January, February or March. NOAA’s Climate Prediction Center issues week-to-week and seasonal outlooks, but they only provide probabilities of how wet, dry, cool or warm regions will be (graphic below). As of now, the next few months are projected to be warmer than normal in much of the South, but that doesn’t mean there will not be any cold days (Remember: Averages).

I hope this little essay provides you with a bit more understanding of why I say there are three potential answers (and likely more) to the question posed in the title. As we progress through the winter season, beware of the snow “wishcasters” that start posting about every little hint of snow from long-range models, questionable sources in social media, Almanacs or Weather Apps.