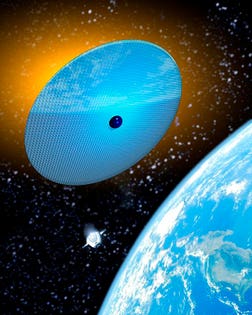 It’s 2020, and not only is the Earth warmer than it has been in over 100,000 years, but the concentration of greenhouse gases that drives this warming continues to increase unabated. If we want to cool the Earth down, perhaps it’s time to look beyond simply advocating for clean, green energy and an end to reliance on fossil fuels. Perhaps, instead, we should be thinking about geoengineering solutions, like going to space and intercepting some of the Sun’s light before it ever reaches us. That’s Dan Goerke’s idea, as he asks:

[A]s a fan of terraforming options in the solar system, especially Mars, I thought that I would leverage my knowledge to assuage the fears of innocents. In this case, I thought to myself “If global warming is such a critical issue, why don’t we do something ‘cheap’ and ‘simple’ like building a solar shade at a Lagrange point?”

It’s a clever idea with a lot of potential. Let’s take a closer look.

The first step is to understand why Earth’s temperature is what it is. You might think that it’s the Sun that gives us our warmth, but that’s only mostly correct. If you were to apply the most straightforward method for estimating Earth’s average temperature, you would:

That calculation is pretty straightforward from a physics perspective, and gives an answer of 255 K, which works out to either -18 °C or 0 °F in more familiar units.

This value, unfortunately, doesn’t even come close to matching reality. The mean temperature of Earth is much warmer than that ⁠— by 33 °C or 59 °F, in familiar terms ⁠— and it’s for reasons that have nothing to do with the Sun at all. Instead, this extra bump in temperature is due to the insulating effects of Earth’s atmosphere, which doesn’t just reflect or transmit incoming radiation from the Sun, but outgoing radiation emanating from Earth’s surface.

Without an atmosphere, sunlight comes in, gets either reflected or absorbed, and then the absorbed heat gets re-radiated as infrared light. But with an atmosphere, some of that infrared light gets absorbed or re-reflected back down to Earth’s surface, particularly due to the presence of water vapor, carbon dioxide, and methane. All three of these gases act like a blanket for the entire planet: they restrict the ability of Earth’s heat to escape into space.

Since the dawn of the industrial revolution, humanity has caused Earth’s carbon dioxide concentration to skyrocket; it is currently just over 50% higher than it was in the mid-18th century. While many other complex effects are also at play in determining Earth’s temperature, these two basic ones ⁠— the Sun’s energy arriving at Earth and the Earth’s ability to retain it due (mostly) to its atmosphere ⁠— are by far the most important.

For more than 40 years, scientists have understood that human-caused increased concentrations of greenhouse gases are what’s driving global warming and climate change, but efforts to curtail these emissions have not been successful. It’s now 2020, and our collective climate inaction is leading many to consider geoengineering solutions. While most geoengineering ideas involve altering Earth’s atmosphere or surface, the option with the least risk is what Dan proposes: to intercept a portion of the Sun’s light before it ever arrives on Earth.

The simplest way to do this is to launch something up into space, far from Earth but in between our planet and the Sun, that prevents a portion of the incoming sunlight from impacting the Earth. With a lower solar irradiance on our world, temperatures can be controlled, even with the currently elevated (and still rising) greenhouse gas concentrations.

Sure, Earth’s atmosphere will continue to trap more heat as time goes on, acting like a progressively thicker and thicker blanket as our greenhouse gas emissions continue unabated. But just as you need more/thicker blankets to maintain the same comfortable temperature when the ambient temperature is colder, it stands to reason that if we know what the blanket situation is but can control the ambient temperature, maybe we should.

If we wanted to completely counteract the cumulative effects of human-caused global warming to date, we’d only need to block out approximately 2% of the Sun’s light that would normally arrive at Earth on a continuous basis. While that sounds like (and, in actuality, is) an enormous amount of energy, there’s some help that the Universe gives us — for free — in implementing either a blocking or deflecting of sunlight as a climate solution.

In between the Earth and the Sun, there’s a gravitationally quasi-stable point where the combined gravitational forces of the Earth and the Sun cause any object located there to remain at the same relative Earth-Sun position all year round: a Lagrange point. While there are 5 total Lagrange points in practice, the L1 point is most interesting, as an object placed at L1 will always remain between the Earth and Sun, intercepting a portion of the emitted sunlight that would otherwise arrive at Earth.

The physical location of L1 is quite distant: 1,500,000 kilometers away from the Earth. This is approximately four times the average Earth-Moon distance, meaning you’d need a physical object larger than the size of our planet to cast a shadow on Earth and block out the Sun’s light completely. But even a series of small objects that either blocked or deflected the incoming sunlight, so long as the total reduction added up to 2%, would do the job.

How practical is this?

In order to reduce the sunlight we receive at Earth’s surface by 2%, we’d have to stop approximately 2% of the sunlight headed towards Earth at or near the L1 Lagrange point. That corresponds to about 1 million square kilometers, or an area comparable to the disk of the full Moon: an enormous amount to cover. However, there are two brilliant ideas that could accomplish exactly this.

1.) Place an enormous constellation of small spacecrafts at L1. Proposed by astronomer Roger Angel, an array of lightweight, thin circles approximately 1 foot (30 cm) in radius could significantly reduce the amount of sunlight reaching Earth, if there were enough of them.

Instead of reflecting light like a mirror (where they’d experience significant radiation pressure) or absorbing the sunlight directly (which would degrade the quasi-stable orbit at L1), these circles would simply blur any sunlight that was transmitted through it. Most of the transmitted light would then miss the Earth, reducing the total irradiance proportionally.

The big downside is that we’d need a lot of them: 16 trillion, to be specific, to achieve the reduction that we’d want, which would require covering 4.5 million square kilometers (4.5 × 1012 m2). However, if we wanted to require less surface area, we could go with an alternate proposal.

2.) Place a large space lens (or a series of smaller lenses) in orbit at L1. Proposed way back in 1989 by James Early, a device as simple as a glass shield a few millimeters thick could act as a lens, which would diffuse a large amount of sunlight away from the Earth. Because of how efficiently lenses can cause the Sun’s parallel rays to diverge (or converge for a brief while and then diverge), only about 1 million square kilometers (1 × 1012 m2) of coverage would do the job.

It wouldn’t have to be one single lens, either, as an array of smaller space lenses could accomplish the same goal. The smaller the lenses, the more of them you’d need, but it’s a low-risk, high-reward option, as the danger to Earth from anything going awry is practically nil.

However, both of these potential solutions have some drawbacks: they’re very expensive and the solution is temporary. We have experience launching objects to L1, as the majority of our Sun-observing satellites are located there. But it’s very difficult to send large quantities of mass to space, and that’s what would be required here. If we considered the lighter proposal of a series of thin film circles, with each one just 1/5000th of an inch this and weighing just 1 gram, that would still add up to ~20 million tonnes of mass.

With present-day launch costs, we’d be spending trillions of dollars to launch an array to L1. There are reasons to hope that as reusable launch technology becomes more reliable, this might decrease launch costs to under a trillion by the end of the 2020s, making it more feasible than many of the current proposals to combat climate change terrestrially. Once we get these spacecraft to L1, however, there’s another problem: their orbits will decay.

It would be a remarkable feat if we could counteract global climate change with a one-time investment in space, but due to the way gravitation works, even the idea of blocking sunlight before it arrives will require enormous ongoing investments in maintenance.

And yet still, for all of it, this might be the most economical solution to the problem of global warming. As launch costs continue to drop, as we get better at placing our satellites in their ideal orbits on the first try, and as we develop artificial intelligence and new in-space technologies like ion drives and solar sails, we could conceivably mitigate the ill effects of global warming for just a few trillion dollars per decade.

Moreover, the solution of intercepting and deflecting incoming sunlight is the one geoengineering idea that would have no long-term negative environmental effects for Earth. Unlike adding chemicals to the atmosphere, strategically injecting particulates or cloud nucleation sites into the skies or oceans, or placing satellites in low-Earth orbit, this won’t alter the Earth itself, just the incoming sunlight before it arrives.

As the planet continues to warm and greenhouse gas levels continue to rise, many are lamenting the lack of effective strategies to combat the effects of climate change. While ocean acidification and other problems arising from the increased greenhouse gases won’t be helped, a solution to the warming problem may lie with a Space Sunshade, an idea whose costs are literally astronomical but continue to drop with time. The longer we wait to act, the more compelling the case becomes for this unique geoengineering solution.