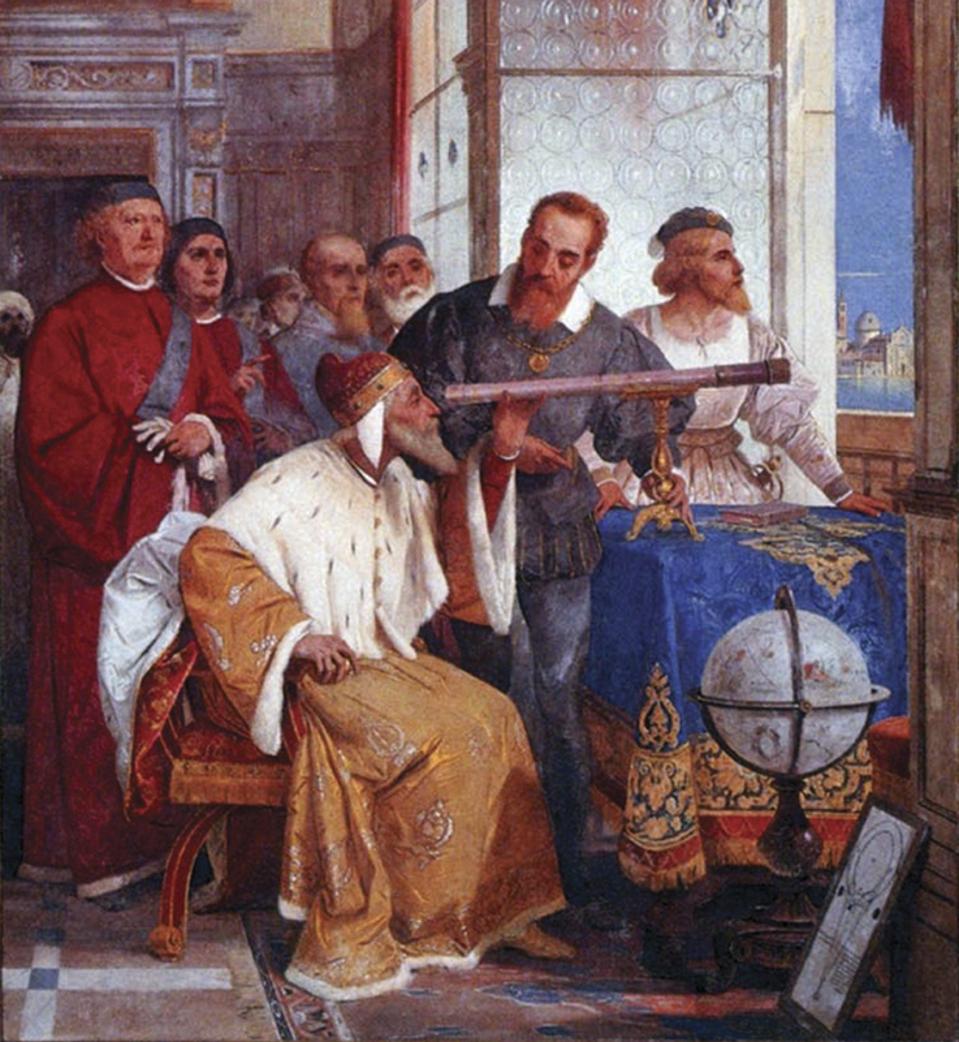 In this life and this Universe, there will always be questions beyond the capabilities of humanity to answer. There’s so much that we’ve learned and experienced, from the subatomic structure of matter to the existence of unstable, fundamental particles to the origin of our Universe in a hot Big Bang and much, much more, but we’ll never know it all. There are limits to everything: to the high energies we can achieve, to how close we can reach towards absolute zero, to how far back we can view the Universe, etc. Some information is forever lost to the past; other information will never be revealed, even infinitely far into the future. And yet, what if we could somehow know the unknowable? What would we choose? That’s what Patreon supporter Tomas Wallgren wants to know, asking:

“Let’s say you came in contact with an all-knowing oracle and you were allowed to ask two questions that would be answered thoroughly. What would you ask? How would you formulate the questions? Why these two? Are you afraid of any possible answer?”

It’s a great opportunity, so I’d want to make sure not to squander it.

There are all sorts of existential questions we could ask that we’d love to know the answer to, but that would be a wasted question. For example, I wouldn’t ask, “is there life beyond Earth,” because we know the answer is yes. We know that terrestrial life forms have already left our planet:

As anyone who’s familiar with role-playing games and the idea of “making a wish” can attest, you have to word your question very carefully — closing all the loopholes — to make sure that what you receive addresses the central point of what you’re seeking.

Instead, if you wanted to know about life in the Universe, you might do better to ask about where the nearest complex, differentiated, biological life form is located outside of our Solar System’s Oort cloud. This would give us an answer to the question of whether there is such complex life beyond our Solar System (and would exclude any tardigrades aboard Voyager 1 and 2), and would give us a location to set out sights on if we ever hoped to investigate it.

However, I wouldn’t choose that question — or any question about life in the Universe, for that matter — because it cheats us out of obtaining the answer ourselves. Science isn’t just a set of facts or a body of knowledge, remember, although that’s a big part of it. We’d gain that from asking an oracle a carefully-worded question or two, but we’d miss the second part of science: all that we learn from the investigative procedure inherent to it. Science is about interrogating the Universe itself and learning from not only the results we obtain, but the process of finding things out.

If we demanded the answer to a big, existential question from an oracle, we’d learn the answer to that question, sure, but we wouldn’t reap the benefits of actually performing the investigation ourselves. We are currently developing new techniques and instruments to survey planets throughout our galaxy for molecular biosignatures (or at least “bio-hints”), determining where life is likely to be present.

We’re working on developing direct imaging technology for Earth-sized planets around Sun-sized stars, where worlds that are likely to have life will stand out from the rest. And we’re currently looking at and listening to the Universe for possibly intelligent signals. The process of investigation reveals a more comprehensive answer, and opens up us to possible surprise discoveries, than simply asking an oracle could ever reveal.

For that reason, there are lots of enticing options that I would shy away from. Today’s greatest mysteries about the Universe — like dark matter and dark energy — might be chief among the questions we’re curious about, but simply being told “what they are” would cheat us out of the process of both discovery and attempted discovery. In biology, it might be what the critical step was that took place to bring about the existence of life from non-life. In computer science, it might be tempting to know whether “P = NP” or not. Unfortunately, even having those answers wouldn’t truly help us solve the types of practical problems we’re interested in (efficiently) solving.

It’s sort of like knowing what Fermat, the mathematician behind the infamous Fermat’s Last Theorem, would have written in that notorious margin if only he had the space. It’s almost certain that Fermat would have arrived at an incorrect, false solution to his conjecture, and many, including me, remain curious as to what his line of thinking actually was. But even though we suspected it was correct, the centuries-long quest to solve that mathematical problem, finally achieved with the brilliant work of Andrew Wiles in 1994, was far more insightful than simply “knowing” the answer would have been.

For that reason, I’d have to choose questions that we’re extraordinarily unlikely to ever find scientific answers to, yet would be transformative to humanity if we could know them. Lots of people would immediately move to the religious, wanting to know about the existence of God, the meaning or purpose of life, or what it means to be a good person. I’m not entirely sure that learning these answers would do anything other than satisfy the person asking the questions, however they chose to pose it to satisfy their own curiosities, and so I tend to shy away from those as well.

The most tempting question for me, and the hardest one to not ask, would be about the origin of our Universe. There’s so much we don’t know about what happened before the hot Big Bang — and so much we can never know about cosmological inflation, if what we surmise today is correct — as so much of that information is inevitably erased from our observable Universe. And yet, there are bigger, more important questions to ask.

If I had two questions to ask an oracle, I couldn’t justify wasting one on such a selfish point, no matter how curious I am about it. Here’s why.

1.) How do we successfully develop and implement scalable, safe, low-waste, self-sustaining nuclear fusion power infrastructure to provide virtually unlimited energy to the entire world? This one is a question I admit I’m assuming there’s an affirmative answer to, but I think it’s one of the most transformative questions we could possibly ask. If we can unlock the secret to self-sustaining nuclear fusion, whether that’s through plasma fusion, inertial confinement, or any other method, we could solve a whole slew of problems on planet Earth.

We would solve the problems of global warming and climate change, as there would be no need for fossil fuels to provide energy. We would have no need to plunder or compete for a variety of energy resources on Earth. We could devote our efforts to energy storage and transmission technologies, rather than looking for fuel sources. And we could eliminate a type of inequality that’s found all across the world: unequal access to needed power. Much in the same vein as the Star Trek franchise, this would be a way to advance technology that benefits the entirety of humanity.

It’s always possible that nuclear fusion, in order to achieve these things, necessitates something as massive as a star of some type, which means I’ll have wasted that question. That’s always a concern, and should be. But this is not dependent on demanding the existence of new or novel physics that might not be a part of our Universe; fusion has been demonstrated under a variety of circumstances. The main problem, today, is with controlling it and leveraging it to power the world.

Unlike nuclear fission, it produces only very small amounts of radioactive waste (largely from neutrons), and contains no risk of either a meltdown or a runaway reaction. Unlike chemical-based fuels, it’s not based on near-term limited resources, nor does it produce large amounts of pollutants, nor are the ingredients difficult to come by or hazardous to obtain. Given the number of people on Earth and our energy demands, this is a technological solution to one of the longest-standing problems facing humanity. If we could simply ask an oracle and know the answer, I’d consider myself a monster if I didn’t choose it.

2.) How can we overcome our divisive nature — our social problems, our technological infancy, our war-like history, our tendency to solve frustrating problems with violence, etc. — to work together towards the common goal of devoting our lives to not only our own individual betterment, but to the betterment of all humans and all living creatures? What, did you think I was going to ask about the secret to an interstellar spacecraft, time travel, or a transporter? Those are chief among my technological dreams, it’s true, but we don’t know whether these dreams are physically possible with the limited resources currently available. Not when our survival is on the line. After all, it’s pretty clear that our undoing can come very easily from our own worst impulses.

Right now, we are seeing a rising tide of “us vs. them” in the world. We are seeing divisiveness; we are seeing people who disagree with us on any issue being branded as pure evil. (Some people are evil, of course; I’m not denying their existence.) But most of us have a genuine desire to do good and be good to each other in the world. With nuclear, chemical, and biological weapons at our disposal, and our demonstrated willingness to use them against our fellow humans, the challenge is how to choose kindness and compassion in a way that doesn’t result in our differences leading to our own destruction. It’s not a problem that I know how to solve for society. But if an oracle could do it, I honestly believe it could be the transformation that brings about world peace and a unified Earth for the common good.

We live on a world with limited resources, in a galaxy with a finite number of stars and planets, in a Universe that contains a finite number of particles and a finite amount of information. No matter what scale we view the Universe on, we will always run into limits. Although we could gain some fascinating knowledge if we had access to an oracle, we would still be left to our own devices to use that knowledge for the benefit of us all, and to find the solution to the myriad of problems that the oracle didn’t give us the answer to.

Yet in all the Universe, for everything we’ve learned about it, there is no evidence that anyone else is coming to save us from ourselves. We must figure out, no matter how impossible or unlikely it seems, how to overcome our ignorance, our fear, and our divisive impulses all on our own.

We don’t have oracles that we can appeal to; it is up to us to figure out the correct path forward. All we can do is trust the best expertise that the human enterprise can obtain — in science, health, medicine, and so on — and act with kindness and compassion towards all. It might seem more of a fantasy than even an omniscient oracle does, but it isn’t. It’s within our power to make it a reality, but it’s up to us to make it so.

The US National Academy of Sciences can now kick out harassers. So why hasn’t it?
Researchers Identify The 6 Most Common Problems That Plague Romantic Relationships
Reverse and forward engineering of Drosophila corneal nanocoatings
From Butts To Bricks, This Is The Plan To Recycle Cigarettes Into Construction Materials
New York and Boston maintain their lead