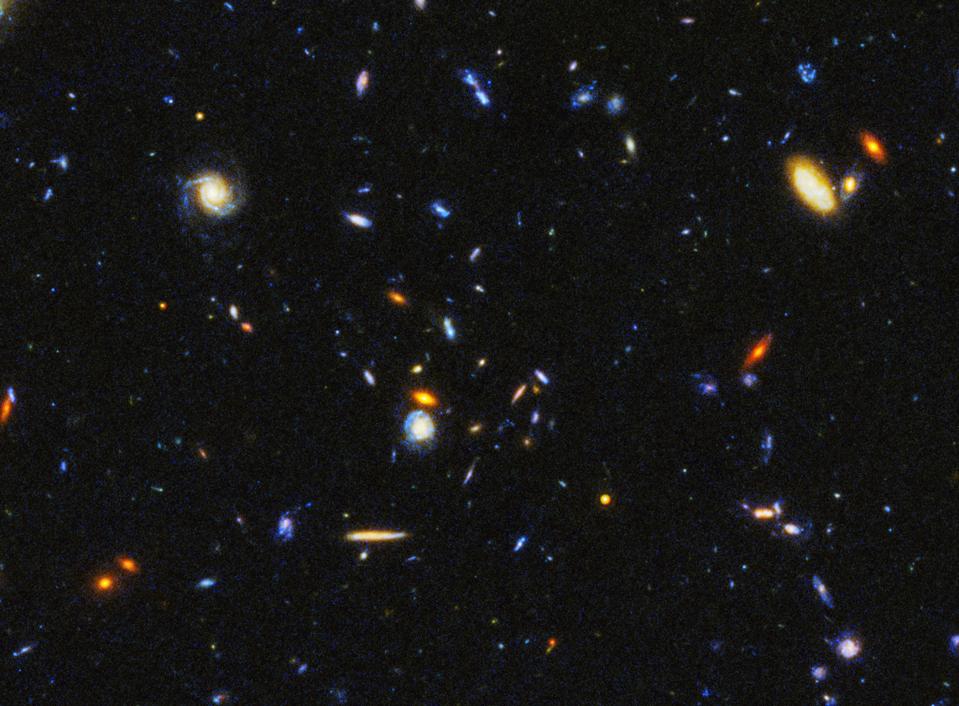 When we look out at the Universe today, we see sources of light practically everywhere we look. In all directions, stars shine, gas clouds contract, galaxies merge together, and a myriad of other processes occur that release energy and emit radiation of some type. So long as some process in the Universe can release energy, interesting reactions can occur. But at some point, every process in the Universe that can release a quantum of energy will emit its very last one, and if that occurs, the Universe will truly run out of energy. Is that our ultimate fate? That’s the question of Dennis O’Brien, who wants to know:

“The universe is theorized to end with a “big freeze” when even black holes evaporate. Dark energy is thought to expand (but not become more dense) as space expands. Assuming the universe continues to expand at that point of the big freeze, will dark energy eventually stabilize the universes temperature or will it continue to decrease ever closer to absolute zero?”

It’s a fascinating line of thought to explore. Let’s learn what the Universe has in store for us.

Billions of years ago, the Universe was hotter, denser, more uniform, and was forming stars at a much more rapid pace than today. If we want reactions to spontaneously occur, the primary ingredient that we need is a source of energy: a way to transition from a higher-energy state to a lower-energy state, releasing energy. That energy can then be absorbed by something in the environment, and used to actually create or synthesize something that is — for lack of a better scientific word — “interesting.”

When a photon of sunlight with the right wavelength strikes a chlorophyll molecule, that energy can be absorbed, exciting the molecule and leading to the production of sugars. When an animal ingests a sugar molecule, it can metabolically digest it to provide energy for its activity. And sunlight isn’t necessarily even required, as hydrothermal vents deep within the ocean can also add energy to the environment, which can again be absorbed and put to use by whatever’s in their surroundings.

But as time goes on, the Universe tells stories like these less and less frequently. The star formation rate, today, is just 3-5% of what it was at its peak some 11 billion years ago, meaning that smaller numbers of new stars are converting less matter into energy via Einstein’s E = mc² as time goes on. The more time that passes since the Big Bang, the more the Universe expands and cools, shifting the leftover radiation from the Big Bang to longer wavelengths, lower densities, and lower temperatures; it’s already just 2.725 K, and continues to cool.

Meanwhile, the stars themselves, although they continue to shine, are fundamentally limited. Deep within the cores of these nuclear furnaces, light elements fuse together into heavier ones, releasing energy in the process. Even once star-formation ceases entirely, the existing stars will continue to burn, giving off radiation and converting mass into energy. But someday, each one of those will run out of fuel, too.

The most massive stars, when they run out of fuel in their core, will end their lives in a supernova explosion. Their cores will collapse while their outer layers get ejected into the interstellar medium. What’s left behind is debris, some of which will get recycled into future generations of stars, and stellar remnants — neutron stars or black holes — from the cores themselves. Stars like this live for only millions of years: a cosmic blink-of-an-eye.

Less massive stars, like our Sun, will gently blow off their outer layers over a much longer period of time, while their cores contract slowly down to a white dwarf. These stars live for much longer: billions of years, typically. The outer layers are returned to the interstellar medium, and when two white dwarfs collide, accrete enough mass, or merge, they can also produce a brilliant cataclysm: a type Ia supernova.

And finally, there are the least massive stars of all, like Proxima Centauri. They’ll burn through fuel for trillions of years, very slowly, until the entire star is composed of helium. When that occurs, the entire star will contract down to a white dwarf: a stellar remnant of the same mass as the star that spawned it.

The thing about imagining the far future, though, is this: we can always imagine waiting a longer amount of time than whatever process we’re considering. Neutron stars and white dwarfs may be hot, small, and massive, but they will eventually radiate all of their energy away, too. After hundreds of trillions of years, they’ll fade away and become invisible; after quadrillions of years, they’ll finally approach absolute zero.

New stars will occasionally form as gas clouds collapse and brown dwarfs (failed stars) merge, while stellar cataclysms and collisions will sporadically light up the Universe. Matter that passes too close to a black hole will get tidally disrupted and/or devoured, giving off flashes of brilliant radiation.

But if we wait long enough, those will cease, too. After about a quintillion years, give or take a factor of 10, gravitational interactions will eject most of the objects in our galaxy into interstellar space, leaving only remnant systems behind.

When we’ve waited long enough, the leftover glow from the Big Bang will fade away to become negligible. There will be no more radiation from stars, from stellar remnants, or from gas. Atoms will all be in their lowest energy states, and most of the solar systems that ever existed will have been kicked out of the galaxy. There will only be three major sources of energy that persist beyond that point.

1.) Gravitational radiation: as masses orbit one another and otherwise move through the space that’s curved by the presence of other masses, they emit gravitational radiation. The emitted energy comes from somewhere, though, as the orbits themselves decay. On timescales of ~1026 years, a planet like Earth will spiral into the remnant of a star like our Sun.

3.) Dark energy: this is the trickiest one of them all. Dark energy, as we know it, is an extra form of energy in the Universe apart from matter, antimatter and radiation. It behaves differently, and is the component required to explain the accelerated expansion of the Universe. As time goes on and the Universe expands — if dark energy behaves in the simplest fashion that are consistent with observations — the energy density of dark energy will remain constant.

If that’s how dark energy works, and it’s indistinguishable from a cosmological constant, it teaches us that the Universe will never run out of energy, as there will always be a finite amount of energy inherent to the fabric of space itself. But, as an important counterpoint, it isn’t useful, extractable energy. Because the dark energy density is the same everywhere, there’s no way to leverage its presence to do any form of work. Dark energy might always be there, but it isn’t going to be useful the way other forms of energy are.

If you want to release energy, which you’ll need to perform any sort of work in the Universe, you need to transition from a higher-energy state to a lower-energy state. On Earth, that can be as simple as putting a mass atop a hill and letting go. As the ball rolls down the hill, it transitions from a state of higher gravitational potential energy to a state of lower gravitational potential energy, as it moves closer to the center of the Earth. That energy gets converted into kinetic energy — the energy of motion of the ball — and can be used for practically any applicable purpose you like.

But what if, instead of having hills, valleys, and otherwise interesting topography, our planet were perfectly uniform? There would be no transitions possible; every point on the surface would be at the same energy level as every other point, and no way to go from a higher energy state to a lower energy state.

Now, here’s the kicker: it doesn’t matter what that energy state is. Whether the world was entirely at sea level or atop a large, raised plateau wouldn’t matter. The “absolute” energy is irrelevant for these purposes; we’re only interested in energy differences that can be leveraged.

That’s the tricky part about dark energy. If there were no dark energy at all, that would be the equivalent of having a zero-point (lowest-energy) state to the Universe that was exactly zero. The fact that we have dark energy is fascinating in the sense that the zero-point energy, or the lowest-energy state of the Universe, appears to be finite and non-zero. To look at it a different way, the Universe has a cosmological constant, and it’s positive and finite, and nobody knows why.

But dark energy doesn’t add anything to the Universe in terms of temperature. Yes, it’s a form of energy, but temperature is all about the energy that particles — or quanta of some type — possess in a system. As dark energy continues to expand the Universe, the quanta that exist will all decay, fly apart, or redshift until they reach arbitrarily large wavelengths. After enough time passes, the temperature of everything, from gravitational waves to photons to anything else we can fathom, will truly asymptote to zero.

There is a ray of hope, however, that perhaps a big freeze fate — where the Universe reaches a state where no further energy can be extracted — could be avoided. Perhaps the energy that’s bound up in the fabric of space due to dark energy itself isn’t actually the lowest-energy state of all. Perhaps there’s a lower-energy state that dark energy can transition to, fundamentally releasing energy wherever that transition occurs.

That, along with any scenario where dark energy evolves with time (i.e., isn’t a constant), could vastly change the fate of the Universe. If this energy could somehow be extracted, we could either:

Over the next decade, observatories such as Euclid, Vera Rubin, and Nancy Roman will measure whether dark energy is a constant or not to within ~1% precision. The Universe is probably destined for a big freeze, but until we make the critical measurements, we cannot know for certain.

How LGBT+ scientists would like to be included and welcomed in STEM workplaces
Apple’s iPhone sales peaked years ago, but the pieces are in place for a new ‘super cycle’
Covid-19 Hits New TB Case Notifications In High-Burden Countries: WHO Report
Solar ETF soars as Biden leads in polls. Other groups that could benefit from a Democratic win
AAC Clyde Space to acquire SpaceQuest for $8.4 million