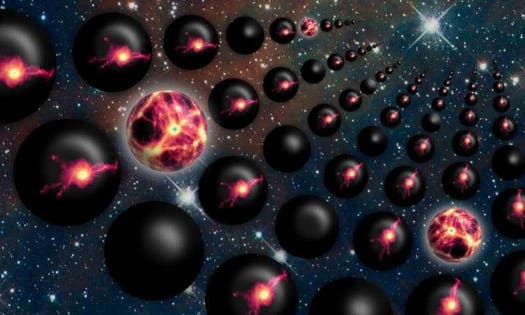 We’ve all had the dream of traveling back in time. Whether there’s a wrong we want to right, a mistake we want to undo, a life we want to save, or a horror story we want to prevent, the amount of good we could accomplish seems immeasurable. We haven’t figured out how to do it, and there might be a fundamental reason why time travel to the past is impossible.

Could Doc Brown from Back To The Future have been right? That’s what Alex Knapp wants to know, as he asks:

My 8 year old watched the Back to the Future movies for the first time and would like to know if, as Doc Brown suggests, the creation of a temporal paradox could unravel the space-time continuum and destroy the entire universe?

It might be a little hyperbolic, but temporal paradoxes are more than a little worrisome. Let’s think about why.

When it comes to the way the Universe actually is today, you have to realize how unlikely this particular outcome was. Over the course of 13.8 billion years, just the visible part of our Universe has seen all the particles within it — numbering somewhere around 1090 — interact and collide with one another countless times.

It’s only through those interactions that we formed stars and galaxies on the largest scales, but also the heavy elements, organic molecules, and planets (like Earth) that allow life to have arisen.

The path our planet took to bring each one of us about has been a string of extraordinarily unlikely outcomes, due to the sheer number of possibilities that the Universe could have admitted. A tiny change that might have been imperceptible a decade ago, like whether a buzzing fly caught your attention or not, might have been the difference between whether you noticed the future love-of-your-life or not. The fall of your foot along a hiking trail could be the difference between whether a young, poisonous snake emerged and bit you or not. The flow of a stream of water molecules along the ocean shore could be the difference between a pleasant day at the beach and the day a child tragically drowned.

In physics, we call this phenomenon “chaos.” A tiny difference in the initial conditions of a system could, over time, lead to dramatically different outcomes. If we were to somehow trace back the entire history of every particle in the Universe, we would find that there was a particular path and set of interactions that each one experienced. That path was by no means set in stone; if you were to rewind and run a simulation of the Universe a second time, it would be extraordinarily unlikely to give you the same outcome.

Many of the processes in our Universe are random, including at a fundamental, quantum mechanical level. Their outcomes are inherently uncertain, and intrinsically unpredictable. In quantum physics, all we can compute are the probabilities of outcomes, not any certain outcome itself.

The point of going over all of this is to emphasize how the Universe we have today, exactly the way it is, was the result of a mind-bogglingly large number of quantum decisions that have occurred over the Unvierse’s history. The chance of having this exact outcome, even given the same conditions and the same laws again, are practically nil.

So if you talk about going back in time and changing the past, you’re definitely not going to arrive at the same Universe we have today. Things will inevitably be different, and that could have some terrible repercussions.

For example, what if you went back in time, à la Marty McFly, and intervened in a critical situation for your own existence? What if you prevented your parents from meeting and falling in love? Certainly, there would be no way for you to have come into existence. And yet, you clearly do exist, so how would you therefore travel back in time to do something like prevent your parents from conceiving you?

Thought experiments like this have led many to conjecture, on philosophical grounds, that time travel to the past is impossible. There is an associated paradox with this, known as the “grandfather paradox,” which states that the Universe must not admit the possibility of traveling back in time to kill your own grandfather, therefore preventing your own existence.

But would this unravel the spacetime continuum? Would this destroy the entire Universe?

Perhaps not. Paradoxes tell us that our conventional way of thinking about a subject is, at best, incomplete. But it doesn’t mean that the consequences will be as dire as unraveling spacetime or destroying the Universe. It may simply mean that there is something else going on in the Universe beyond what our initial thoughts have told us.

As far as whether this is a catastrophic paradox or not, my bet is on “not.” Given the laws of physics as we understand them today, there are two potentially viable ways out.

The first one is to say that the past is indelibly written, and nothing we do can change it. This isn’t necessarily incompatible with the idea of time travel to the past! Imagine you learned that a disaster was going to befall your best friend, and you needed to go back in time to warn him. So you get into your time machine, go back, warn your friend, and return.

Well, under this scenario, this is something that had already occurred! Your friend would have remembered meeting your time-traveling form in the past, receiving a warning, and prepared for the inevitable appropriately. You would have traveled back, done whatever you did, and returned. All of this already occurred, before you even realized it, because the events that are occurring now for you have already occurred in the Universe’s past.

Under that first scenario, then, the way out of the paradox is to note that whatever it is that you would do and affect by traveling back in time has already occurred. The way the Universe arrived at its present state is due, in part, to the actions you took at every step of your existence, including the steps where you traveled back in time.

The thing you give up, though, is the ability to change the Universe through your own actions. You’re well aware that, today, the actions you take have incredible importance for tomorrow’s outcomes. Whether you go to work, punch your boss, or drive your car into the sea have tremendous consequences. But if you traveled back to the past and acted there, those consequences would already have been determined. It’s an unsettling thought.

The second way out is to assume that the past isn’t written, and your actions do matter. The Universe, as it exists today, is not bound to the state its in right now if you travel back to the past. In a way, every action you take creates a new, alternate history for the Universe. You can kill your own grandpa before your parents are conceived; you can prevent your parents from meeting and falling in love; you can kill Hitler before World War II or assassinate Brutus and Cassius and Marc Antony before they assassinate Caesar.

In short, you can change history.

The only thing you have to give up, then, is that the Universe you inhabit after traveling back in time is the same as the Universe you inhabit before you went back. Your actions can change the future, but at a cost: everything that occurs after your time travel escapades gets rewritten by a new, alternate history. The Universe as-you-knew-it, in the now-future, is unwritten, or is written in a Universe that you can no longer inhabit.

Where you are, now, is going to have the entire future unfold differently than if you hadn’t gone back. And in this new future, you may not even be born. You may simply have come into existence at the moment you arrived at your time-traveling destination. You would literally be a visitor from another Universe.

Time travel to the past is certainly mathematically possible, but whether it’s physically possible or not is open to debate. If it is possible, though, it won’t help you or your friends avoid whatever fates have already befallen them in this Universe. What is true today is a result of what has happened in the past, and that record is already written. It’s what we do in the present that truly counts for the future.

Send in your Ask Ethan suggestions and questions to startswithabang at gmail dot com!