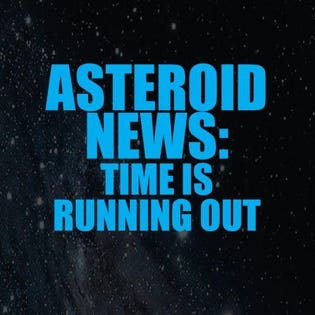 Millions of years ago a large object impacted the Earth and was responsible for the mass extinction of the majority of Earth’s species, including the dinosaurs. An asteroid impact is a real threat but it’s also a random one. We don’t know when this will happen again. It could be next year or it could be 1000 years from now. There are currently too many unknowns in the equation.

Are we doing enough?

Earth is not taking this issue laying down. In the United States, we are spending about $4 million each year searching and tracking Near Earth Objects or NEOs. A near-Earth object is defined as an object whose orbit comes within 0.33AU of Earth’s orbit. The most recent NEO was discovered on Oct 27th, 2018. According to the Center for Near Earth Object Studies 90% of the near-Earth objects larger than one kilometer have already been discovered. This was a goal that was mandated by Congress in 1998. The one-kilometer size is thought to be the minimum size needed to cause global devastation. The next step in protecting Earth came in a second mandate called the George E. Brown Survey Act of 2005. This mandate required the discovery of 90% of near-Earth objects greater than 140 meters by the year 2020. Sadly no new funds were appropriated for this effort and NASA has repeatedly said that it cannot reach this goal by 2020 with its current funding and now time is running out.

How much longer can Earth roll the dice?

Whenever I get talking about objects impacting the Earth I remember the words of Charlton Heston in the opening of the movie Armageddon “It happened before, It will happen again. It’s just a question of when”. The longer we leave the goal unfinished increases the chances that we will be caught by surprise. To date 18,911 near-Earth objects have been discovered, 893 are larger than one kilometer and 8,343 are larger than 140 meters. That sounds like a lot but there are still a lot of NEOs up there and we won’t know if they are a threat until we find them. The deadline of 2020 is not going to be reached. Hopefully we can solve this problem before 2030.

You may be thinking that a 140-meter object may not sound like much of a threat.  Think again. In 1908 a 70-meter object impacted Tunguska in the Siberian wilderness, destroying 2000 square kilometers of forest.

What can be done?

One project that could help NASA reach is goal has already been through 10 years of reviews and cost reductions.  It is called the Near-Earth Object Camera mission, or NEOCam, and it is ready to build. This craft would be positioned at Earth’s L1 Lagrangian point which sits between the Earth and Sun where the gravitational forces of each body cancel each other out. From here NEOCam would observe the Earth with its back to the Sun and be able to track a great number of NEOs. For now, it seems that a space-based mission like NEOCam will be necessary in order to reach the goal of 90%.

Recently a group of scientists with no affiliation with NEOCam wrote an op-ed explaining why we need to fund this mission as soon as possible. One of the scientists Richard P. Binzel had this to say “NEOCam covers two blind spots that we can’t see from telescopes on the ground – objects coming nearly directly from the Sun and stealthy dark objects that reflect very little light toward Earth.  NEOCam surveys much closer to the Sun than ground-based telescopes and makes its detections in the infrared, where non-reflective dark objects appear bright as they radiate away the heat from their absorbed energy.  Interestingly, NEOCam could have given us several days warning in the case of the 2013 Chelyabinsk impact. “

The B612 Foundation has also released a statement supporting the mission saying “Now is a very important time for such efforts, as the infrared space telescope NEOCam is fighting for funding. We wholeheartedly support this push.”

It seems that the scientific community is coming together on this issue. After years of falling behind it seems that we just might be able to find the funding to get NEOCam built and launched. Hopefully, it will all be done in time.

As always here is the list of the objects that will come close to Earth in the coming month.

To learn more about NEOs please visit the website for the Center for Near Earth Object Study. https://cneos.jpl.nasa.gov/