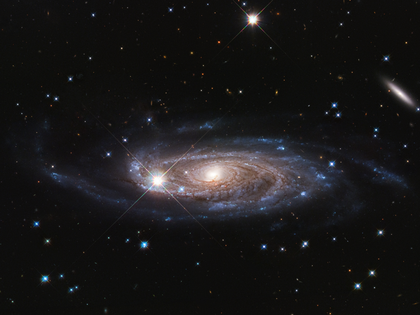 NASA, ESA, and B. Holwerda (University of Louisville)

Above a certain size, spiral galaxies shouldn’t exist. A single major merger — where two galaxies of comparable mass interact to form a larger one — will almost always destroy that spiral structure, producing a giant elliptical instead. The only ultra-large spiral galaxies we typically find are in the process of gravitationally interacting with a neighbor, producing an extended but temporary “grand spiral” structure.

But for every rule, there are remarkable exceptions. One particular galaxy, known unofficially as Rubin’s Galaxy after Vera Rubin’s observations of the rotational properties of UGC 2885, is far larger and quieter than practically any other spiral galaxy known. This is a spiral galaxy of unusual size, a true G.O.U.S., and while it doesn’t quite defy our theories of how galaxies form, it certainly is a challenge to explain. Remarkably, just from observing the right details, astronomers now think they know how this most unusual galaxy formed.

In theory, there are two ways to build up a large spiral galaxy, and they both begin the same way. In the young Universe, a large cloud of matter — both normal matter and dark matter — will begin to collapse under its own gravity. While the dark matter is responsible for the majority of the mass, it only interacts gravitationally, which means it can’t collide, heat up, lose angular momentum, or collapse. The dark matter always remains in a diffuse, “fluffy” halo.

But the normal matter, made out of the same ingredients that we are, interacts with itself. Normal matter doesn’t just experience gravitation, but as it collapses, the different atoms, molecules and other particles collide and interact. They lose angular momentum, and in whichever dimension it collapses first, it goes “splat” and forms a disk, which then rotates. This is the origin of the disk-like structure present in all spiral galaxies.

As far as we can tell, galaxies always start out small and then grow in two possible ways.

Both of these processes are seen to occur in our Universe, with the latter one occurring for dwarf galaxies surrounding our own Milky Way right now.

What couldn’t happen, though, is the fastest, most efficient, and most common way to increase a galaxy’s mass: through a major merger. If two galaxies that are comparable in size ever merge together, regardless of the orientation of the merger, an enormous fraction of the gas contained within both galaxies will collapse in a spectacular burst of new star formation. It’s a spectacular astronomical event known as a starburst: where the entire galaxy becomes a giant star forming region.

This generally uses up most of the gas present in the new galaxy, forms a whole slew of stars all at once, and then star formation ceases. These stars form over a large volume of space, creating an elliptical structure rather than a spiral one, and then — as the galaxy ages — the most massive stars die and only the smaller, cooler, redder stars remain. Elliptical galaxies are notorious for having very few instances of star formation past the initial burst arising from their creation, and are far and away the largest and most massive galaxies of all.

To find a spiral as large as the one we see here — Rubin’s galaxy (UGC 2885) — implies that there were no major mergers. The fact that we still see:

tell us that this spiral grew by either gas accretion, minor mergers, or both, but via no other processes.

Even if it’s a cosmic rarity that a galaxy would form this way, though, a good scientist always wants to know exactly how it happened. Fortunately, there’s a very clever way to tell: by looking at the globular clusters present within the galaxy.

Whenever you get a big burst of star formation, you don’t just produce new stars evenly throughout the galaxy, although you do produce copious amounts of them over a wide area. What happens is that the largest, most concentrated areas of gas result in an enormous, dense collection of stars — from tens of thousands of stars all the way up to millions of new stars — all contained within just a few dozen light-years: a globular cluster.

Each galaxy has its own unique population of globular clusters found distributed all throughout its halo, which are formed during episodes of extreme star formation. If all the extreme star forming episodes happened at once, we expect the globular clusters to all be the same age in the galaxy, indicative of at least a medium-sized merger at a specific period in time. On the other hand, if there were many mergers of small galaxies or a build-up of gas to form the one we see at the present day, we expect globular clusters to come in a variety of ages. Both scenarios are eminently possible, but good enough observations of the globular clusters themselves should be able to determine which one is true from the colors of the stars within them.

In our own Milky Way, for example, the majority of the globular clusters we find are extremely old, formed some 12 or 13 billion years ago. This component of the globulars indicate that the main component of our Milky Way was formed early on by gravitational collapse and a potential merger, leading to an extreme burst of star formation that occurred over just a brief period of time. However, alongside those, we also find globular clusters that are much younger, indicating that smaller galaxies and the inflow of gas, which caused new bursts of star formation and the formation of new globular clusters at various times, occurred gradually over time.

For this reason, measuring the ages of the globular clusters within Rubin’s galaxy — a true G.O.U.S. — will reveal whether there were significant mergers in the past that resulted in bursts of star formation and the creation of new globulars all at once, or whether they formed at many different times, indicating only a gradual accretion of gas without any significant galactic mergers (and large bursts of star formation) to speak of. When a team of scientists turned the Hubble Space Telescope’s eye on Rubin’s galaxy, they were able to uncover something unprecedented.


NASA, ESA, and B. Holwerda (University of Louisville)

First off, all of the globular clusters they did find showed a variety of colors, which is a great indication that they were formed at a variety of epochs from gradually inflowing gas. Perhaps most interestingly, there isn’t a large set of globulars that all seemed to form at around the same time, indicating that there weren’t any major or medium-sized mergers in the history of Rubin’s galaxy. This piece of evidence, all on its own, is a point in favor of the “gradual accretion of gas” scenario, rather than an accretion and merger of surrounding, smaller galaxies.

But a second piece of evidence is even stronger: the number of globular clusters found in this behemoth of a spiral galaxy is tiny for its mass, indicating that there were realistically no major bursts of intense star formation since very early times that were triggered by mergers or gravitational interactions.


NASA, ESA, and B. Holwerda (University of Louisville)

When we look at the environment surrounding this G.O.U.S., there are neither nearby massive structures nor disturbed internal structures that would account for the large, extended spiral structure of this galaxy. Rubin’s galaxy really is this massive cosmic outlier, likely formed only by the gradual accretion of matter.

According to the study’s Principal Investigator, Benne Holwerda, the most comparable galaxy to Rubin’s galaxy in our own local neighborhood is the quiet, small spiral: M83, the southern pinwheel galaxy. It is:

all of which point to a quiet, slow accretion of gas. However, Rubin’s galaxy is enormous, making it the first galaxy with these combined properties to date.

At 800,000 light-years across and with some 4 trillion stars inside, this is one of the largest spiral galaxies ever discovered: a true cosmic outlier. At just 230 million light-years away, it’s also close enough that we can image and identify its globular clusters and star formation rate. The fact that a galaxy this large and massive is so regularly shaped, with such low levels of star formation and so few globular clusters (1600) for its incredible size really does make this a cosmic unicorn.

This galaxy of unusual size really is a first-of-its-kind, and not just for being so beautifully symmetric and quiet, but for growing to this enormous magnitude without a single major disruptive event throughout its history. In all the Universe, there may not be another like it, but the odds are far better that this is just the first discovery of a new type of spiral galaxy: a G.O.U.S.