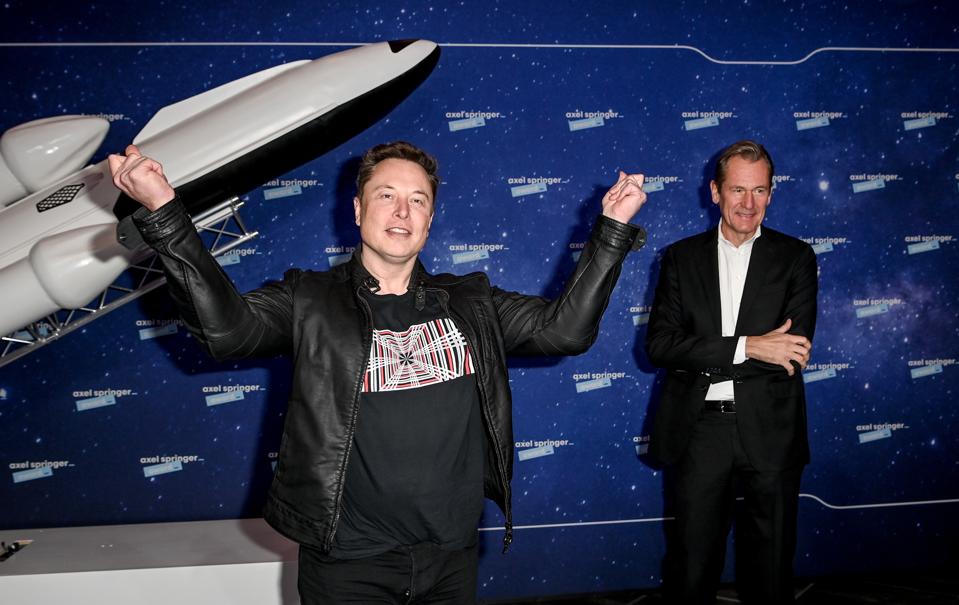 Billionaire Elon Musk has scooped up one of Europe’s most prestigious business awards previously won by some of the world’s best-known entrepreneurs including Mark Zuckerberg and Jeff Bezos.

The Tesla and SpaceX founder received the Axel Springer Award on Monday night, in Berlin–Musk was heralded at the event by Germany’s health minister Jens Spahn as someone who has made “seemingly crazy ideas become reality.”

However, never one to miss an opportunity to make his shareholders sweat, the world’s third-richest person, in conversation with Axel Springer CEO Mathias Döpfner, reiterated that he thought the stock of his Tesla electric car maker was too high at $800 a share before it split 5 for 1 in August. Tesla closed Tuesday at $584 a share.

On Tesla’s rise over the last decade, Döpfner put to Musk a 2014 conversation he’d had with a “very successful and famous” CEO of a German car maker (whose name was not revealed) about Musk’s potential to disrupt the German car industry. Something that, at the time, very few thought possible.

The CEO told Döpfner back in 2014, not to worry, “electric driving” was never going to be “mass market,” and “these guys in Silicon Valley–they have no clue about engineering, [no clue] about building really beautiful and great cars. So we don’t have to worry.”

Tesla’s market cap was $23 billion at the time, Döpfner noted. “Today it’s $536 billion,” he said. “You are–with Tesla–two and a half times bigger than BMW, VW and Daimler [Mercedes].”

It’s not the first time Musk has courted controversy over the rapidly-rising share price of his electric car startup. In May, Musk landed himself in hot water after tweeting that “Tesla stock price is too high imo.” Asked if he was joking, Musk replied in an email to the Wall Street Journal with just one word–“No.” Since then, shares have risen nearly 300%.

The award is given by German publishing house Axel Springer to “outstanding personalities who demonstrate an exceptional talent for innovation, create and transform markets, shape culture and also face their social responsibility.”

The theme of the night was one of Musk’s favorite topics: life on Mars. Asked if he’d like to be buried on the red planet, Musk said yes—“just not on impact.”

The Axel Springer headquarters was “transformed” for the event into a spaceship with pretend astronauts, a cabin-crew voiceover charting the path of Musk’s career and computer generated  space travel graphics.

On the subject of when humans might first reach the red planet, Musk stuck to the timeframe of “about six years from now,” pointing to the “Earth-Mars synchronization” (alignment) window that occurs every 26 months. Musk added that he hopes to send an “uncrewed vehicle” there in two years, and if that’s a success and SpaceX “gets lucky,” a human mission could happen in just four years.

When asked about his personal plans to reach orbit, Musk said “two or three years,” although he stressed that he’s “mostly concerned with developing the technology that can enable a lot of people to go to Mars and make life multiplanetary. [And have] a base on the moon and strive to have a self sustaining city on Mars as soon as possible.”

“I’m optimistic about the future on earth but it’s important to have life insurance for life as a whole,” he added.

The conversation quickly moved from the stars to the cars, an important topic for a German audience for whom cars–including brands like Volkswagen, Mercedes, BMW and Porsche–form the backbone of their country’s export economy.

In November 2019, Musk’s decision to build Tesla’s European Gigafactory in the Berlin area was celebrated in Germany, further cementing its position as Europe’s motor-manufacturing powerhouse into the electric car era.

However, Musk’s decision came as some relief to Germans who, according to Döpfner, had failed to take Musk and Tesla seriously.

“When we first unveiled the Roadster in 2007…they just said, ‘You’re basically a bunch of fools,” Musk reminisced. “‘Starting a car company is crazy, you’re gonna lose all your money.’” Instead, Musk is the world’s third-richest person today. His fortune has nearly quadrupled during the Covid-19 pandemic alone, rising from $24.6 billion in mid-March to a current $132 billion by Forbes’ estimates.