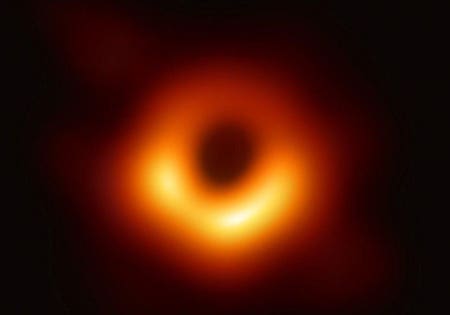 One of the most important scientific results of my lifetime was revealed this month. Scientists released an image of a black hole and its event horizon. My colleague Ethan Siegel has an outstanding discussion in Forbes of 10 important lessons from the revelation. As a fellow scientist, I was really excited for everyone involved in the countless years of work preparing for that moment. As a human being, I was just fascinated by what I was seeing. I also pondered something else. A subset of the public is in complete awe of science that showed us evidence of a black hole 55 million light years away. Yet, they might be completely dismissive of observations that Earth’s climate is changing and that humans are part of the reason why?

A supermassive black hole at Messier 87.

Apparently, I wasn’t the only person that had this thought. Astrophysicist Neil deGrasse Tyson tweeted:

SCIENTISTS: “We’ve produced the first-ever image of a supermassive Black Hole, 55-million light years away”
RESPONSE: “Oooh!”SCIENTISTS: “We’ve concluded that humans are catastrophically warming Earth” RESPONSE: “That conflicts with what I want to be true, so it must be false”

Lee Constable had a similar and equally thought-provoking tweet about the apparent selective acceptance of science:

Weird how scientists can use data to create an image of a black hole in a neighboring galaxy and everyone is cool and chill about that. But the recommendations scientists make based on data that gives us a picture of climate change ON EARTH… apparently up for debate.

When I think about the point being made with those Tweets, Julie Beck’s 2015 article in The Atlantic, “Americans Believe in Science, Just Not Its Findings,” comes to mind.  Beck’s outstanding piece dissected a Pew Research Center study finding that “79% of adults say that science has made life easier for most people and a majority is positive about science’s impact on the quality of health care, food and the environment.” Roughly 70% of those surveyed also thought government investments in science and technology pay off in the long run. This is certainly encouraging because our smartphones, GPS, and advanced medical procedures didn’t appear out of thin air.

Beck’s article also made the point that Pew’s study found public opinion about certain “hot button” topics like climate change, evolution, and genetically modified foods diverged from scientists. It is tempting to chalk this up to “confirmation bias” whereby people align with information consistent with their belief systems, ideologies, or faith perspectives. However, I think there is a bit more to the story.

A 2011 study published in the Journal of Risk Research posed the simple question: “Why do members of the public disagree – sharply and persistently – about facts on which expert scientists largely agree?” They find that something called “cultural cognition of risk” helps to inform individuals’ beliefs about science, consensus, and related processes. They point out that a collection of psychological mechanisms allows some people to selectively accept or dismiss scientific information in ways that fit with others. For example, though a large percentage of scientists might conclude that anthropogenic climate change or vaccination denial are threats, cultural cognition of risk might cause a person to believe a smaller minority of scientists that align with their perspective.

I touched on some of these cognitive biases in a recent Ted talk, but I didn’t know the fancy psychological terms. I just know what I have experienced in my 25 years as an atmospheric scientist who does weather-climate research and broader communication. A 2018 article in the journal Public Understanding of Science further demonstrated how a person’s “cultural way of life” in combination with news media choices further polarize consumption and understanding of science.

I find the particular euphoria about the black hole image particularly interesting because there are actually elements of its science that should create the same type of skepticism observed with climate change: Remote observations from a distance, an element of tension between science and faith-based narratives, and a constantly changing astronomical “landscape.”  I suppose the difference is that with climate change stakeholders are perceived as “winners” or “losers” and may infect the broader discussion. Erik Conway and Naomi Oreskes point this out in the book Merchants of Doubt. For now, black holes have no “special interest” bias.

Changes in carbon dioxide on Earth over the past 400,000 years.