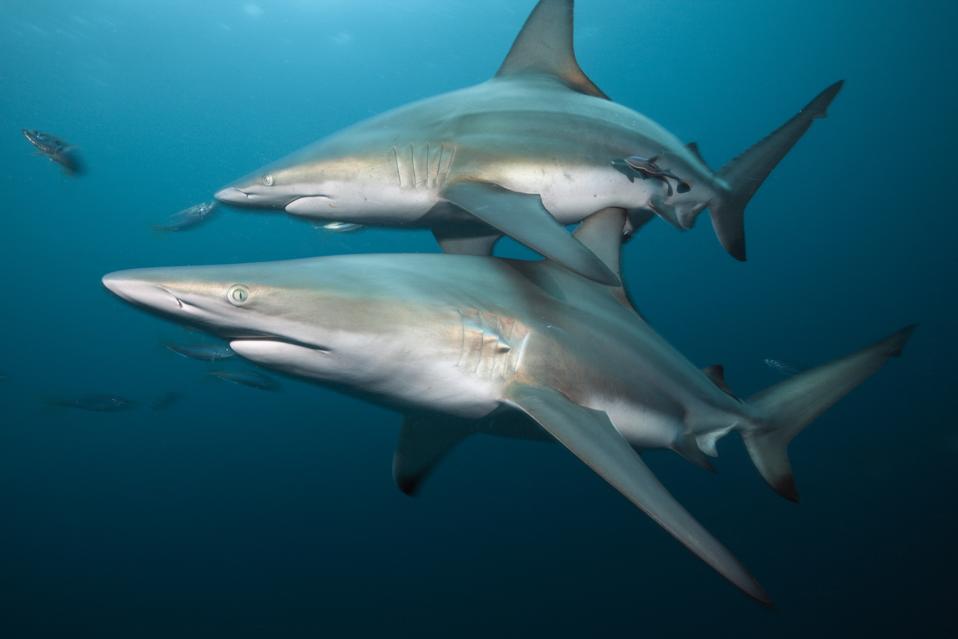 Being a picky eater usually means one tends to not get their nutritional needs met due to being too selective, possibly leading to both short- and long-term nutrient deficiencies and other problems. But what happens if a shark is the picky eater? While many sharks are opportunistic predators, some are picky eaters and exhibit prey selectivity – meaning they are at higher risk compared to species that have more diverse diets.

It was previously thought that blacktip shark (Carcharhinus limbatus) in the Gulf of Mexico were picky eaters due to Clupeids and Sciaenids making up over half (69%, to be exact) of their diets in older studies. But a new study – that originally wasn’t even about these sharks! – shows their diets are more diverse than expected.

But let us rewind: why even care about sharks here? Well, top predators play key roles in their respective ecosystems and their loss (largely due in part to human actions like overharvesting and habitat deterioration) has not only altered the structure of predator populations in some areas, but entire ecosystems. According to the Texas Water Development Board, has 367 miles of coastline that boast seven major and five minor estuaries ranging from nearly fresh to frequently hypersaline waters. These estuaries support a diverse array of species that help economic activities as well as provide a myriad of ecological services (e.g. water filtration, storm surge protection, and the regulation of nutrients). “Coastal regions can be particularly vulnerable to [destructive] actions because of the compounding effects of climate change and sea level rise, and Texas estuaries are also affected by freshwater sequestration for human use,” explained Dr. Philip Matich of Texas A&M University and lead author. To understand the ecological roles of abundance predators found across the Texas coast, Matich and a team first focused on alligator gars and bull sharks and how variability in water quality and food web structure may affect their resilience to long-term changes in the environment. “However, during the project we realized that blacktips are not only also highly abundant in many Texas estuaries, but exhibit considerable similarities with these two predators and should be concomitantly assessed in this predator complex.”

Blacktip sharks are widespread in warm-temperate, subtropical, and tropical waters worldwide and known to inhabit inshore areas that make them highly vulnerable to capture in commercial and recreational fisheries. Since they have inshore pupping and nursery grounds, it is important to know what they eat and how their diets change as they grow… enter the gillnets. “The state of Texas has been using gillnets to conduct routine monitoring of its estuaries since the early 1980’s in order to assess the relative abundance and size structure of its fish stocks. Sharks are among the fish found in gillnets, and unfortunately some do not survive because of the duration of time they are caught in the nets,” said Matich. “In 2018, we teamed up with offices in Port Arthur and Port O’Connor, TX which retained sharks that were not caught alive. We extracted the stomachs of these sharks, and identified all of the contents within the stomachs, noting the number of items and respective weight for each prey species. After the stomachs were evaluated, we assessed the data based on the size of sharks to understand how blacktip diets change as they grow.”

The researchers predicted they a large portion of what they would find would be Gulf menhaden (Brevoortia patronus) and Atlantic croaker (Micropogonias undulatus) based on previous research in the western and northern Gulf of Mexico. “We found very little evidence of this,” commented Matich. “Blacktip diets were more diverse than expected, and included ladyfish, catfish, mullets, red drum, and other sharks, as well as menhaden and croaker.” So, what happened to the Gulf menhaden and Atlantic croaker? Were previous studies wrong? “It’s unclear if the declines in prey species is a product of the sampling method. [But] state monitoring data suggest that menhaden and croaker have been declining based on gillnet surveys since the early 2000’s, so this could explain the discrepancy in our study compared to others in the region,” he said. “Assuming these stocks have been declining and the relative abundance of blacktips has been increasing for the last 20 years, then blacktips may be feeding on other prey populations [fitting] our hypothesis that blacktips are opportunistic predators and resilient to ecological shifts.”

While it is promising for their conservation that blacktips may be more generalized predators, Matich warns that more of their research indicates if the relative abundances of food resources for newborn blacktips are low, then blacktips may be smaller in size heading into their first winter due to slower growth. “Juvenile blacktips appear to migrate into the Gulf of Mexico in October, November, and December to avoid cooling water temperatures within Texas estuaries, and smaller body sizes lead to higher risk of predation by larger sharks and fewer energy reserves to fuel this migration. Initial findings suggest that survival rates may be lower for these smaller sharks, so if prey populations decline then it could be consequential for juvenile blacktips – stay tuned for more later in 2021!”