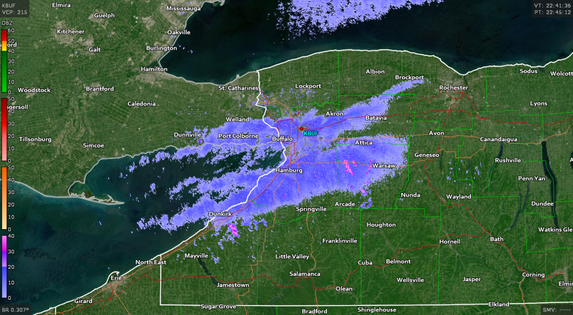 The National Weather Service in Buffalo, New York, on Wednesday took the extraordinary step of calling blizzard conditions and intense cold across the region a “particularly dangerous situation,” strong language reserved for only the most severe storms. Meteorologists have to walk a fine line when they issue alerts warning people of hazardous conditions; use too many scary-sounding words like “life-threatening” or “extreme” and people will tune you out during the most dangerous weather events.

One of the rare designations that meteorologists have in their toolkit to get people to pay attention is the phrase “particularly dangerous situation,” or PDS for short. Forecasters will add PDS language to a severe weather alert—most commonly a tornado watch—to let people in harm’s way know that they’re experiencing a life-threatening situation that requires their undivided attention in order to survive.

The statement from NWS Buffalo leaves no room for ambiguity:

AT 356 PM EST, TWO BANDS OF LAKE EFFECT SNOW ARE PRODUCING SNOW FALL RATES OF UP TO 2 INCHES PER HOUR ALONG WITH VISIBILITIES NEAR ZERO. TEMPERATURES ARE BELOW ZERO WITH WIND CHILLS NEAR -25 DEGREES BELOW ZERO.

…THIS IS A PARTICULARLY DANGEROUS SITUATION…

BLINDING SNOW AND WHITEOUT CONDITIONS ARE OCCURRING. A CASUAL DRIVE OR TRIP OUTSIDE CAN QUICKLY LEAD TO A LIFE THREATENING SITUATION WITHOUT PROPER WINTER GEAR. PLEASE HEED ALL TRAVEL BANS.

Much of the Midwest and Northeast are in the grips of a brutal cold snap right now. Temperatures on Wednesday morning dropped as low as -44°F in Bottineau, North Dakota, as the coldest air washed over the region. Minneapolis-St. Paul Int’l Airport reached -29°F on Wednesday morning, while lows in the -20s reached as far south as Iowa and Illinois. It hasn’t been quite as cold farther east across the Great Lakes in the Northeast, but it’s still cold enough to cause significant issues.

While the most frigid conditions remained in the Midwest, dangerously cold temperatures eventually made their way to the Northeast. High temperatures in western New York barely climbed above zero on Wednesday afternoon. Buffalo’s high of 10°F occurred between 2:00 AM and 3:00 AM on Wednesday, slowly dropping to 0°F by 11:00 AM, where it remained for the rest of the afternoon.

This cold air is key to the blinding lake effect snow pumping off of Lake Erie. Lake effect snow is produced through convection, which is the same process that produces thunderstorms. The warmer lake water warms up the air immediately above the surface of the water. When extremely cold air flows across the lake, the great temperature difference between air at the surface and air aloft can cause the warmer air to rise, producing bands of lake effect snow. This process can occur deep into the winter if the surface of the lake remains uncovered by ice; a week ago, satellite imagery revealed that there was relatively little ice on Lake Erie to save western New York from persistent lake effect snow.

The bands of lake effect snow roaring across western New York have been prolific. Communities under the most persistent bands will end up with several feet of snow by the time the storm is over on Thursday night. Heavy snow and dangerously cold temperatures are bad enough on their own, but the two conditions are combined with gusty winds sending wind chill values plummeting as low as -25°F.

Blizzard conditions can be disorienting for anyone caught outside, which is a life-threatening prospect when wind chills are so low that you can develop frostbite or hypothermia in a matter of minutes. If there was ever a time for meteorologists to use the “particularly dangerous situation” wording outside of a tornado outbreak, weather conditions cold and snowy enough to disorient and kill you sure seems like it’s the top contender.

Iceye to launch three SAR satellites on SpaceX rideshare flight
Energy is now outperforming but ‘is no longer a buy-and-hold sector,’ trader says
Online clothing reseller Poshmark closes up more than 140% on first day of trading
OneWeb raises $400 million
Starlink satellites are now invisible to the naked eye, but astronomers still see them