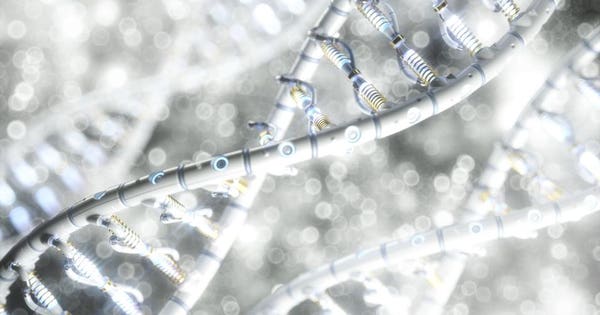 London-based blockchain startup Genomes.io is on a mission to protect and productize DNA. By sequencing and then securely storing full genome sequences using blockchain technology, industries such as pharmaceuticals and insurance will be able to query an individual’s DNA data and reimburse those who should decide to share their information.

The DNA industry is growing at a huge pace. With the cost of whole-genome sequencing reducing dramatically – from about $10 billion in 2000 to now only a few hundred dollars – the opportunities that lie in knowing more about individuals’ makeup are finally being realized. Grand View Research projected that the DNA sequencing market will grow from $4.15 billion in 2016 to $15.9 billion by 2025, and CB Insights showed investment in genomics startups grew from $500 billion in 2013 to over $3 billion in 2017. And it’s not just investors who have shown interest – insurers such as MassMutual, Anthem, United Healthcare and CMS have all partnered with genomics companies in a bid to gather more data.

Many companies have been offering consumer DNA sequencing for some time – 23andme, founded in 2006, being most prolific with around five million customers – but there are a few caveats. For starters, these kits that cost around $150 only sequence a small subset of the full genome: the exome. Although the variations found in the exome account for a large amount of information about genetic conditions, current research is showing potential beyond the exome – in the so-called ‘junk DNA’ which sits in between the genes themselves. Whole-genome sequencing is the only way to get the information which much current research is focusing on, but private companies charge consumers anything from $300 to over $1000 for the service.

Privacy is also an issue in the industry – this year 23andme announced that they had sold a $300 million stake in the company to pharma giant GlaxoSmithKline, effectively handing over access to the 5 million customers’ data, despite it only containing exome data. GSK will be able to use the data to aid their drug development process, but for many, the commoditization of their paid-for personal health data didn’t quite sit right. And recent reports of DNA testing being used to reunite migrant families in the U.S. has sparked concern around who will have access to individual genetic information.

Enter Genomes.io, a genomics company that allows consumers to securely store their genome from the moment it’s sequenced and subsequently grant access selectively. The idea is to prevent genetic information getting into the wrong hands, whilst giving consumers the opportunity to sell their genetic data bit by bit should they wish to do so.

Mark Hahnel is one of the five Associate Founders of the startup. Having previously founded scientific data company Figshare and with a background in human genetics, he is keen to bring openness and individual opportunity to this burgeoning industry.

Hahnel believes that the cost of sequencing will further decrease to zero over the next 12 months, prompting insurance companies and government health departments to start covering tests for the masses – Genomes.io would then be there to store and give control to the individuals. Indeed, Iceland has already sequenced its whole population, and with the UK’s 10,000 genome project, it looks like others are following suit.

The information would be stored behind an encryption wall but using technology developed by business blockchain development company iXXo, Genomes.io can allow clients such as pharma companies to ask specific questions about parts of the whole-genome sequence, and if granted, that particular part of information alone can be passed on by the individual. This process prevents corporates from gaining entire sequences at a time when they only need a small fraction and allows individuals to monetize their information over and over again. The opportunity, as Hahnel explained is huge for corporates: “it works out 27 times cheaper for insurers to sequence customers genomes than to conduct trial and error of various drugs.”

There are other companies and prominent individuals playing in the space of privacy-focused cheap whole-genome sequencing, such as famous geneticist George Church. The innovation allowing companies to get around the encryption wall, however, is the unique facet of Genomes.io, and with the white paper open for all to critique, both the developer and investment communities have shown excitement in the idea.

Genomes.io ran a crowdfunding campaign in July looking for £50,000 investment to advance their proof of concept completed in 2017. The campaign was oversubscribed by 300%, prompting the startup to close the round early. The plan is to raise their seed round and begin operating end of this year. With 1 billion people set to get their genome sequenced in the next generation, Hahnel is optimistic about their business model: “If we can get a good proportion onto our platform, and every time the data is queried we make a dollar – with 500 million on the platform and 2 queries a year, that’s $1 billion revenue.”

For Hahnel and team, the opportunity lies in the fact that increasing amounts of research has emerged in the space of so-called junk DNA, and thus demand for access to this information by each individual is only set to rise.

“The NIH, NSF and European Commission are paying billions in research every year to essentially make your genome more valuable. They’re finding out new things every week and a lot of that is in the epigenetics, as opposed to the exome, so we’ve only really scratched the surface with trying to understand ourselves. We’ve realized over the past 10 years that ‘junk DNA’ isn’t junk DNA,” Hahnel explains.

For those who have already paid 23andme, though, the opportunity can seem like a missed one in terms of owning their information. Hahnel sees it differently: “If you’ve already had your genome sequenced by a private company that is not focused on securing your data or being decentralized, then unfortunately that data is gone – the only thing we could say is that we could make you some money by selling it on to other people.”

Physics in the pandemic: ‘Our habit of combining theory and experiments was an advantage for the lockdown’ – Physics World
Coal mine in Serbia gives up new Roman treasure
China to restrict expansion of solar equipment producers
How the Navajo got their day in the sun
Dear Sophie: Can I work in the US on a dependent spouse visa?