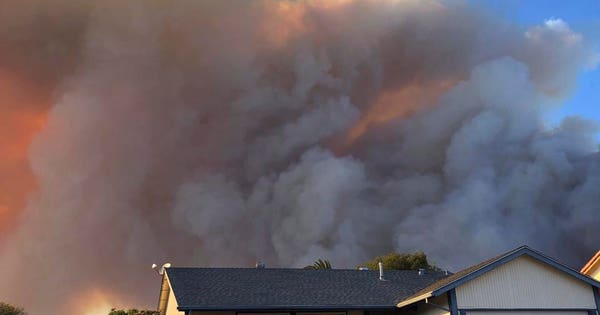 A mandatory evacuation is now in effect for the entire city of Malibu in southern California as a fast-moving fire dubbed the Woolsey Fire burns through the suburban hills and canyons between Simi Valley and the Pacific coast.

“MANDATORY evacuation now in effect for all of City of Malibu, and all areas south of 101 Fwy from Ventura County line to Las Virgenes / Malibu Cyn, southward to the ocean due to Woolsey Fire. Use PCH to evacuate, avoid canyons,” reads a 10 a.m. PT update from the city.

According to the Ventura County Fire Department, the following mandatory evacuations are also in place as of 9:30 a.m.:

The blaze began with a brush fire ignited near the closed Santa Susana Field Laboratory (also referred to as the Rocketdyne facility) south of Simi Valley Thursday afternoon and has since grown to over 10,000 acres and claimed an undetermined number of structures.

The Rocketdyne facility was the site of a partial nuclear meltdown nearly sixty years ago and the subject of controversial and stalled cleanup efforts for decades.

“Our scientists and toxicologists have reviewed information about the fire’s location and do not believe the fire has caused any releases of hazardous materials that would pose a risk to people exposed to the smoke,” reads a statement from the California Department of Toxic Substances Control.

The state says the fire is no longer burning on the lab site.

At almost the same time the Woolsey Fire lit, another brush fire ignited in nearby Hill Canyon to the west. Ventura County firefighters reported that the Hill Fire reached the 101 freeway in less than 15 minutes after sparking to life and then jumped over it.

“Extreme fire behavior, extreme winds; resources couldn’t even get in front of it. It was all about getting people out of the path of the fire. We weren’t even engaging the fire at some points because of the wind,” said Rich Macklin with the Ventura County Fire Department.

As of this morning, Macklin said the Hill Fire was holding at just over 6,100 acres.

The fires come within days of a tragic mass shooting nearby and as the Camp Fire in Northern California burns through the town of Paradise.

Amazon invests in battery recycling firm started by former Tesla executive
Don’t Bet On Aliens: Phosphine Is Amazing, But Doesn’t Mean ‘Life On Venus’
Silicon Valley IPOs are being celebrated in parking lots and conference rooms, as CEOs navigate pandemic and wildfire smoke
The true origins of gold in our Universe may have just changed, again
Here’s everything Apple just announced