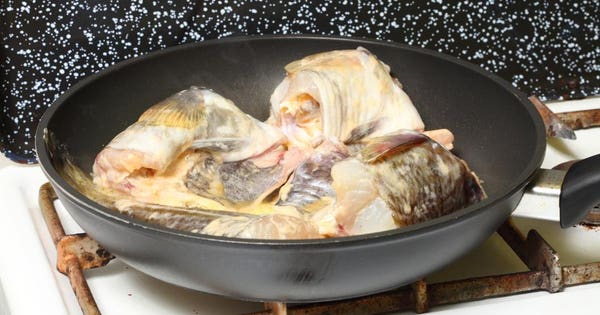 Is this a case of something smelling fishy and then turning out to be an emergency?

As the following CBS New York segment relayed, 11-year-old Camron Jean-Pierre, who had a known allergy to fish and a history of asthma, lost consciousness while his family was cooking cod in the house:

Unfortunately, despite being rushed to Brookdale University Hospital Medical Center, he eventually died. Here in this ABC 7 interview, his father described what happened:

While the cause of death has not yet been established, the suspicion is that he may have suffered a severe allergic reaction from inhaling fish vapor.

Could you really be so allergic to something that simply the smell of it may trigger an allergic reaction? It depends on what’s in the smell.

To have an allergic reaction, you’ve got to have some type of actual physical contact with the substance that you are allergic too, otherwise known as the allergen. The substance has to be on or in your body for your immune system to then erroneously think that it is a threat. This can, for example, be on your skin, in your mouth or digestive system, or in your airways. Your immune system then produces antibodies and other mediators to then combat the suspected invader. This results in the rashes, sneezing, watery eyes, itching, difficulty breathing, or other symptoms that may occur during an allergic reaction. Therefore, phrases such as being allergic to homework or to One Direction music are technically not correct, unless you are somehow rubbing either on your body.

So going back to that fish smell, what could cause an allergic reaction is not the smell itself but fish particles, very small pieces of fish protein floating in the air. Smells occur when some type of molecule in the air enters into your nose. Your nasal cavity has millions of smell receptors, also known as olfactory receptors if you want to sound more sciency. These receptors interact with the molecules and then send electrical signals that eventually make their way to your brain to tell your brain, “oh lovely, this is some lavender,” or “ugh, that’s a fart.”

Does this mean that if you have a severe food allergy,  you should run for cover whenever you sense even just a scent of the food? No.

First of all, if the cause of death in this case turns out to be a reaction to the fish vapor, the 11-year-old would have had been unusually sensitive to fish protein, something that would be possible but rare. It is easy to mistakenly attribute an allergic reaction to a particular food item, because some foods can be so memorable. You may be more likely to remember what you ate more than other details such as other objects or even people around you. For example, you may remember the date where you had that delicious Massman curry dish but don’t quite remember the other person who was there.

Secondly, you have to be exposed to enough of the allergen and the allergen itself to have an allergic reaction. As you know, there are things other than fish protein that can cause you to detect a “fishy odor.” Fish protein, which may be released into the air during cooking, can only travel so far in the air. Therefore, if you happen to smell fish from a fish market or restaurant several blocks away, chances are that you are not getting a waft of enough of the fish protein.

The best thing to do if you suspect that you may have a food allergy is to see a real medical doctor to get allergy testing and counseling. As I wrote just yesterday for Forbes, many people are not even aware of their food allergies or may believe that they are allergic to a particular food item when they are not. Beware of pseudoscience operations that offer questionable allergy testing and treatments. For example, chiropractic spinal manipulation is not an evidence-based treatment for allergies. A doctor who is actually knowledgeable about allergies can arm you with emergency treatments such as epinephrine pen for severe allergic reactions if needed.

Unfortunately, it is possible to take all of these proper steps and still succumb to a severe food allergy. Life is like Sandy Koufax and can throw curve balls to even the most prepared. But cases like this should raise more awareness of food allergies and how to properly deal with them.

Ask Ethan: What Danger Is There In Actively Searching For Intelligent Aliens?
Astronomers detect water vapor on Jupiter’s moon Ganymede for the first time
These entrepreneurs want consumers to reuse wine bottles
Scientists — reach across the aisle, Republicans could be back soon
Weather key issue for Starliner launch